Sunday, February 23
You are at:Home»News»Sabah»Over 100 teams for dragon boat race 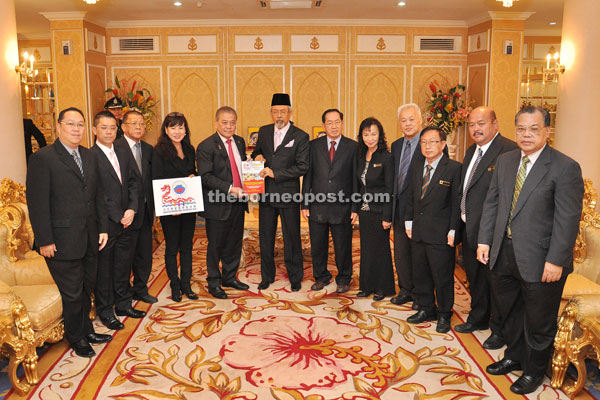 Goh (fifth left) extends the invitation to Juhar, while Wong (fourth left), Yong (sixth right) and others look on during the courtesy call yesterday.

KOTA KINABALU: Over 100 local and international teams are expected to participate in the first Sabah FCAS International Dragon Boat Race 2014 at Likas Bay on June 7-8.

Head of State Tun Juhar Mahiruddin will also grace the occasion on June 8 as the guest of honour.

“We expect seven more teams to register. We are confident that our international dragon boat race will exceed 100 teams,” he said in a press conference here yesterday.

Of the 94 teams, 13 are international participants who come from Brunei, Singapore, the Philippines and Australia.

Asked why there was no participation from China, Goh said it was due to time constraint as the federation was only given two months to organize the event upon its appointment as the race organizer by the State Government in March this year.

Nevertheless, he said FCAS would invite dragon boat teams from China to participate in the race next year, which was tentatively set on June 13-14, 2015, subject to confirmation.

He said the lack of participation from China was not due to the missing Malaysian Airlines (MAS) flight MH370.

In addition, Goh confirmed that the first Sabah FCAS International Dragon Boat Race 2014 scheduled to be held on June 7-8 this year would take place as announced earlier.

He was responding to Sabah Chinese Cultural Association’s (SCCA) statement that the 29th Sabah Dragon Boat Race that was supposed to be held at Likas Bay on June 7-8 this year has been cancelled.

In the statement issued on Monday, SCCA apologized for the cancellation of the 29th Sabah Dragon Boat Race, which the association had initiated and organized for the past 28 years since 1986.

Since then, the event has been co-organized by SCCA, Youth and Sports Ministry and the Tourism, Culture and Environment Ministry until 2013.

According to media reports, the State Cabinet had accepted the proposal by the Tourism, Culture and Environment Ministry on March 12 this year to appoint FCAS to organize the dragon boat race.

SCCA contended that they had not been consulted when FCAS passed a resolution to apply for the organizing rights of the dragon boat race from the State Government on June 30 last year, nor was SCCA informed when the assets of the race, including dragon boats, were handed to FCAS on March 31 this year.

In response to this, Goh said the organizer had received a number of calls asking if the dragon boat race has been cancelled.

“The first Sabah FCAS International Dragon Boat Race 2014 on June 7-8 has never been cancelled and we are here to confirm that no less than 100 teams will be participating in the race,” he said.

He reiterated that FCAS was appointed by the State Government to organize the dragon boat race and the federation had named the event as the first Sabah FCAS International Dragon Boat Race 2014.

“Those who appointed us also handed us dragon boats, life jackets, paddles as well as gave us full support in terms of financial and manpower,” said Goh.

Although the assets were purchased by the State Government, SCCA argued that they ‘belonged’ to the Sabah Dragon Boat Race Committee, and thus should not be handed over to a third party at discretion.

On the safety aspect, Goh assured that all dragon boats, paddles and life jackets were kept by a contractor with licence for ship building.

He said FCAS continued to engage the contractor to carry out maintenance on the dragon boats, and thus the boats would meet international requirements.

In addition, Goh said six of the 20 dragon boats had been used for training at Gayang and Sutera Harbour Resort daily, and there had been no problem so far. The remaining 14 dragon boats were being painted in preparation for the race.

Of the 94 participating teams, 21 are all-Chinese teams, including seven teams vying for the FCAS Trophy open to local Chinese community associations under The United Sabah Chinese Communities Association of Kota Kinabalu (USCCA) only.

On the other hand, five teams from Sabah, Singapore, Kuching, Kuala Lumpur and Australia have registered for the Breast Cancer Survivor Race, she said.

The first Sabah FCAS International Dragon Boat Race 2014 will kick off with the sportsmen oath taking ceremony at Likas Bay on Saturday, June 7 at 7.30am, followed by heats for various categories.

The highlight on June 7 will be the FCAS Trophy for the USCCA mix teams final race at 9am.

On Saturday evening, there will be a welcoming dinner for all participants starting at 6pm. The event will be graced by Tourism, Culture and Environment Minister Datuk Masidi Manjun.

Apart from dragon dance, singing and other dancing performances, there will be a prize presentation ceremony for the winners of the FCAS Trophy for the USCCA mix teams.

Juhar and his spouse Toh Puan Hajah Norlidah Datuk R.M. Jasni are expected to arrive at 10.15am, after the arrival of Chief Minister Datuk Seri Panglima Musa Haji Aman and Masidi.

There will be a 24 Chinese drum performance and zong zi (rice dumpling) offering ceremony to open the event, after which the race continues with the Breast Cancer Survivor Trophy, FCAS Trophy for Chinese Men Teams, Chief Minister Trophy for Malaysian Men Teams and Sabah Head of State Trophy for International and Malaysian Top Teams.

Prize presentation ceremony for the winners is expected to commence at noon.