Sunday, February 23
You are at:Home»News»Sabah»First ever wingsuit flight at Mt Kinabalu 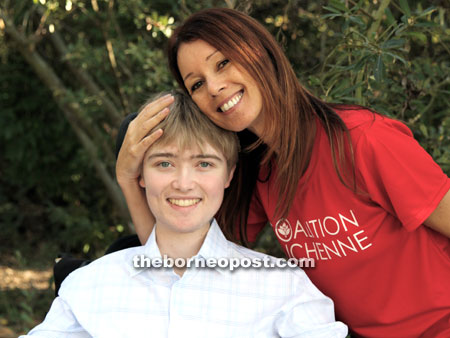 KOTA KINABALU: The region’s first ever flyby using a wingsuit will take place as part of the fourth annual Expedition Mt Kinabalu to be held August 15-17.

The annual event raises awareness about Duchenne muscular dystrophy, the most common fatal childhood genetic disease. It has become a showcase of both Sabah’s natural treasures and community kindness, and is organized by Sabahan Catherine Jayasuriya, the founder and executive director of international charity Coalition Duchenne.

The expedition featured in her 2013 award winning documentary Dusty’s Trail: Summit of Borneo.

Capturing the essence of the event, Sir Ranulph Fiennes, the Guinness World Record Greatest Living Explorer said, “Boys with Duchenne have challenges even I cannot imagine and this climb is a great way to celebrate their spirit”. 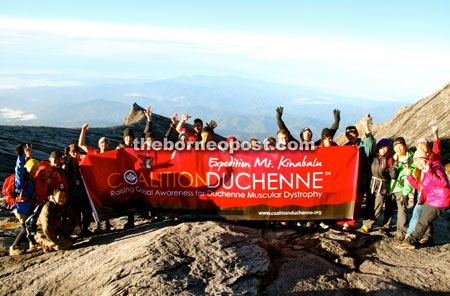 The expedition has grown each year to become a significant part of Sabah’s international event calendar. It shows that Sabah can be a focus for international media attention and serve to make a difference on global issues.

Tourism, Culture and the Environment Minister Datuk Masidi Manjun recognized that importance when he met Jayasuriya’s son Dusty Brandom, who is now 21, at the inaugural event in 2011.

“I told Catherine when she interviewed me for her film that we welcome her and Dusty back home. This is the place of their ancestors. Dusty is the epitome of courage and he puts a face on disability. A child in the kampung who faces obstacles like Dusty can find hope in what he has achieved. Here in Sabah, we respond to global themes and causes. Catherine is a mother, a filmmaker, a philanthropist, and a Sabahan who is making a difference in the world. We are very happy that she has come home and shared this event,” said Masidi.

This year, over 100 international climbers will take part in Expedition Mt  Kinabalu. A historic wingsuit flyby by two professional wingsuit pilots adds to the excitement. Wingsuit flying is the sport of “flying” while wearing a special suit with air filled wings.

Coalition Duchenne has worked in collaboration with Squirrel, a manufacturer of wingsuits, to develop a bright red Coalition Duchenne wingsuit, which has been worn by wingsuit pilots around the world to promote awareness for Duchenne.

Wingsuit pilots participate in a challenging, dangerous sport and can relate to the losses experienced by the Duchenne community. 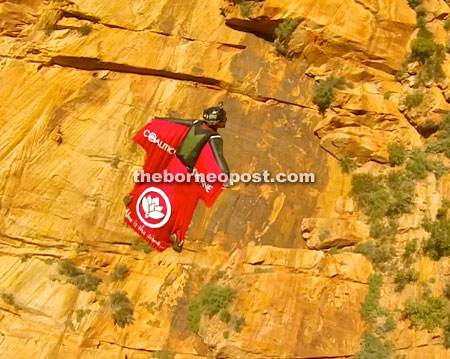 In March 2014, one of the most experienced, professional wingsuit pilots, New Zealander Dan Vicary, lost his life in a tragic accident in the Swiss Alps where he lived.

Dan was strongly committed to the Coalition Duchenne cause and had planned to travel to Sabah to take part in Expedition Mt Kinabalu 2014.

His wife, Lisa Hutchins, will travel from Switzerland to Sabah to fulfill his dream. Also supporting Lisa, honoring Dan, and flying for the cause, is his friend, Australian Chris “Douggs” McDougall, a world champion wingsuit pilot and BASE jumper.

Current plans call for two wingsuit flights. One will be the first ever flight in Sabah and will be from a helicopter above Kota Kinabalu. The wingsuit pilots will cross the sky above the city and land at a yet to be determined public location.

Observers will witness the amazing sight of a man flying, see the Coalition Duchenne wingsuit and the majestic canopy landing. The second wingsuit flight is more ambitious and dependent on weather and other variables. A twin engine helicopter will release the wingsuit flyers 500 feet above the summit of Mt Kinabalu as the expedition Mt Kinabalu climbers watch from the peak. The flight will pass in sight of the expedition climbers before travelling down the mountain and landing near Kundasan.

Helping coordinate the wingsuit flyby is Aziz Ahmad, the president of the Malaysian BASE Association. BASE is an acronym for Building, Antenna, Span (bridge) and Earth (cliff) representing the most common launch points for BASE jumpers.

Many wingsuit pilots use their suits when BASE jumping. Aziz is a world-renowned pioneer of BASE jumping and coordinator of BASE and parachuting stunts for domestic and international television and movie projects. Aziz was the first to jump from the Menara Kuala Lumpur Tower in 1999.

Chris McDougall, who has featured prominently in Malaysian BASE jumps over the years, will deliver a motivational speech and answer questions about his exciting sport at the expedition flag off event, to be held at Shangri-La’s Tanjung Aru Resort here on August 15.

Motivation is extremely strong amongst the 100 climbers who have already signed up to participate in Expedition Mt Kinabalu.

Paul Wong, the principal of the Methodist Boys School in Kuala Lumpur, is taking part in Expedition Mt Kinabalu for the third time. This year, he climbs in memory of his son, Albert ,who passed away from Duchenne just months ago.

Also climbing is Steve Wilton from Murdoch University in Perth, Western Australia. Dr Wilton is one of the leading researchers in the field of Duchenne and is a pioneer of a groundbreaking medical technology called exon skipping.

Coalition Duchenne founder Catherine was one of the first to recognize the potential of exon skipping when she helped fund the Dusty Brandom Fellowship at the University of Western Australia to support Dr Wilton’s early research.

In addition to the Dusty Brandom Fellowship and having his name in the title of the award winning documentary Dusty’s Trail: Summit of Borneo, Dusty has come to embody overcoming adversity.

In 2013 Masidi announced that part of the Mt Kinabalu trail would be dedicated as “Dusty’s Trail”. Preparations are underway to choose a particularly challenging section of the climb to be named at an upcoming ceremony.

Dusty’s mother, Catherine, through both her charity events and movie making, has become a leading light in global efforts to find a cure for Duchenne and raise awareness for the condition that affects thousands of boys and young men in every country and of every race.

Dusty’s Trail: Summit of Borneo featured prominently in the 2013 Kota Kinabalu International Film Festival. The film has been shown at film festivals worldwide and has received several prestigious awards.

Inspired by her son, Catherine’s film is the story of Dusty’s journey with Duchenne. The film tells about people coming together from around the world to climb Mt Kinabalu to raise awareness for Duchenne.  The film will be showcased at the Lucerne International Film Festival in Switzerland in October 2014.

“People have told me the film has changed their lives. Dusty’s attitude in the face of adversity, the way he does not even acknowledge adversity, has made people realize that they can also overcome obstacles in their own lives,” said Catherine.

Masidi’s confidence that Expedition Mt Kinabalu would draw people to Sabah has been justified. Dusty’s Trail: Summit of Borneo has received rave reviews and generated tremendous interest in travel to the state.

Writing in the Newport Beach, California, USA Daily Pilot newspaper, John Depko said, “The film features stunning footage of their climb up the mountain’s famous alpine meadow ecosystem. These beautiful scenes are intertwined with pointed interviews with doctors, patients, and researchers working to cure the disease….Joy, hope and tears get equal time on screen”.

In addition to being an official selection of the Newport Beach International Film Festival in California, and the Minneapolis Film Festival in Minnesota, Dusty’s Trail: Summit of Borneo received Best Feature Documentary and Best Visual Effects awards at the Los Angeles Movie Awards, and Catherine was awarded Best Director of a Feature Documentary.

“There are still a few spots remaining for this year’s expedition. We would love to have more people join the international team,” said Catherine.

The event kicks off with a festive flag off at the Shangri-La’s Tanjung Aru Resort on August 15. Interested climbers can reach Catherine by email at [email protected] or through the Coalition Duchenne website at www. coalitionduchenne.org.

Catherine is also seeking sponsorhip for the climb and the wingsuit flyby.

“Dusty and I want to inspire people to overcome the obstacles in their lives, to be in the present moment, and to live their lives to the fullest,” she said.