Thursday, February 2
You are at:Home»Columns»Uncle DI»A state of happy people …
For the freshest news, join The Borneo Post's Telegram Channel and The Borneo Post on Newswav. 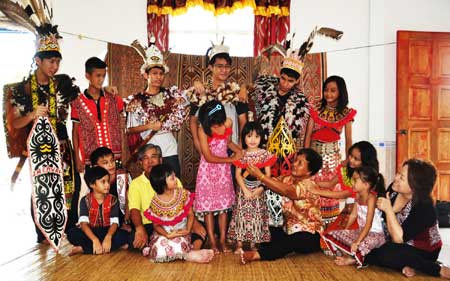 OUT of the 365 days in a year, Sarawakians enjoy 73 public holidays plus Sundays.

Look at the Sarawak Almanac, if you posses one, and you will notice that, apart from the major festivals based on religions or cultural beliefs, there are many other days which are not directly related to the belief system.

They are social and political festivities.

People in Sarawak spend these days on what they consider useful in life – those who believe in the hereafter life spend them on prayers and charitable work; others spend them on computers or smartphones or simply on watching the TV or playing with the pet dogs or cats.

Some go away from town for some fresh air; others spend time in gambling and politicking.

The last activity is carried on round the clock. The politicians spend their time on their favourite game called Intrigue – outdoing or outwitting one another by throwing mud and washing dirty linen in public. Today they are friends, tomorrow no longer; yet the next day they are friends once again.

If everybody abides by the calendar of the year, we should be in a country of happy people – pious, law abiding, patriotic, tolerant, and endlessly festive!

In the Almanac, you will also notice a list of days of religious significance in all the months except November: beginning in January with the 1st day of Rabiulawal (the Arabic Third month), followed by Maulidur Rasul (Prophet Muhammad’s Birthday) and the Chinese New Year. In between there is Rabiualakhir (Arabic Fourth Month), followed by the Lantern Festival in the middle of February.

Then in March, there is Jamadilawal and Jamadilakhir in April, followed by Qing Ming Jie (Chinese Tomb Festival), then by Good Friday and Easter Sunday.

Of course, don’t forget that on the first day of May there is Labour Day, an international holiday. In Sarawak, this coincides with the Rejab (Arabic Seventh Month), followed by Wesak Day, then Israk and Mikraj and Syaaban (Arabic Eight Month).   Gawai Dayak

This is not a religious festival akin to any of the above. It was initiated by the Dayak leaders residing or working in Kuching during the last part of the Colonial government in 1962.

It was felt that there were too many festivals that distracted the farmers from work on the fields and it was becoming more and more expensive to organise them. That was an idea promoted by the non-farming Dayaks in Kuching anyway.

As you may remember, it was Tra Zehnder, while a member of the legislature, who fought like a woman possessed to get it recognised as a public holiday – the Day for the Dayaks of Sarawak. It was first celebrated by Michael Buma in his house at Siol Kandis in Kuching. We youngsters of those days called it Dayak Day and celebrated it with gusto – with the communal dinner, dancing and music; the main feature was the drinking of the toast for health or Ngirup Ai Pengayu at the stroke of midnight.

Later, beauty contests among ladies from the Iban, Bidayuh and Orang Ulu communities were held – for a number of years in the 80s and the 80s.

In the 1980s the Gawai became so popular as a festival that the then politicians adopted it as one of the state’s functions with dinners and cultural shows. For the past few years, however, I noticed with sadness that the interest in the Gawai among the politicians in government has somewhat waned except as a reception thrown in honour of visiting national VIPs.

At the district and village or longhouse levels, it is still popular. But on the flip side, it is being over-observed – another festival called Ngiling Tikai or Bidai follows.

This ‘ngiling’ was not intended to be part of the original idea – which was to have one statewide festival celebrated for one day only to save expenses. But this has apparently failed to materialise.

As it was intended to be a Dayak Day with nationalistic characteristics, the colonial authorities were not enthusiastic about it; it was not formally declared and gazetted as a public holiday until the Kalong Government endorsed it. Even then it was considerably ‘toned’ down and to be celebrated as one of the public holidays only without any political significance.

The year is not over yet. There are other celebrations of national importance, political in nature – Hari Keputeraan SPB Yang Di-Pertuan Agong.

There is Nisfu Shaaban, after which comes the beginning of the fasting month of Ramadan.

Meanwhile, Bandaraya Kuching and the Bandaraya Miri will celebrate their own days. Another religious or cultural festival of no less importance is the Chinese All Souls day – the Zhongyuan Jie/ Yu Lian followed by Christmas, the Birth of Christ.   Meanwhile, let’s begawai and let me propose the toast of long life and good health to all my readers – Gayu Guru, Gerai Nyamai.