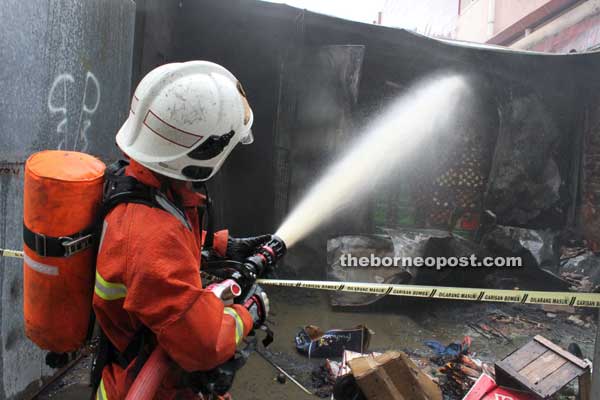 A firefighter making sure the fire is completely put out. — Photo by Thomas Wong

KUCHING: An apparent act of remorse by a snatch thief cost him his freedom at the Ang Cheng Ho Commercial Centre at about 7pm Friday.

The man could have escaped had he not had a change of heart and tried to return the handbag to his victim.

It was not known why he returned to the scene to give back the handbag but he was recognised by several people at the scene who apprehended him and handed him over to the police.

Earlier the woman had lodged a police report saying that the man had parked his motorbike near her and came down to snatch her handbag before fleeing the scene.

In an unrelated incident, a shop lot in Padungan here was partially destroyed after its storage facility went up in flames at about 1.30pm yesterday.

The damage was limited to a small portion of the building by the quick action of the Padungan Fire and Rescue Station, which dispatched both fire engine and motorbikes to the scene.

Firefighters were said to have put out the fire in 15 minutes while the cause of the incident is still being looked into.

As the fire started from the storage facility, it was believed one of the electric motors could have malfunctioned.