Wednesday, January 19
You are at:Home»News»Sarawak»Five arrested for suspected motorcycle theft 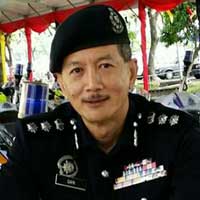 MIRI: Five men in their 20s and 30s were arrested at a house in Piasau Utara on Thursday for suspected motorcycle theft.

Police also seized a motorcycle frame and several other components in the 4.05pm raid.

Meanwhile, Gan said 49 summonses were issued to 21 motorcyclists for various traffic offences during Ops Cantas on Friday. Held from 10pm to 2am at Jalan North Yu Seng, it was a joint operation between traffic police and the Crime Investigation Department.

“Out of the 21 motorcycles detained, 10 summonses were issued for not possessing driving licenses, while the remaining 10 were issued summonses for numerous traffic offences such as no insurance and road tax,” Gan said.

A man in his 20s was also arrested for possessing drugs believed to be Methamphetamine.

Gan said the case has been referred to the Narcotics Department for initial investigation.