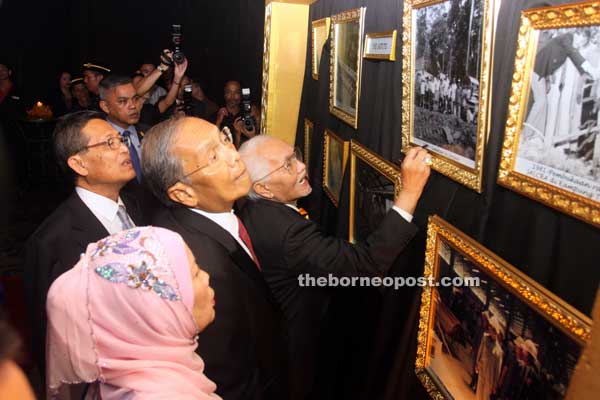 Taib pens his signature on an old photograph featuring him being displayed on the wall. With him are Adenan (second right), Jamilah and Dollah (behind Adenan). — Photo by Jeffery Mostapa

KUCHING: Sarawak has a solid foundation to achieve the status of a high income and developed state by the year 2030, says the Yang-di-Pertua Negeri Tun Pehin Sri Abdul Taib Mahmud.

Taib said the status is achievable as the state had experienced rapid development with the establishment of Sarawak Corridor of Renewable Energy (SCORE).

He said the challenge for the current state leadership under the leadership of Chief Minister Tan Sri Datuk Amar Adenan Satem was to continue the momentum of development.

“I hope the chief minister, together with the others in the state leadership will do better than what I have done before this.

“The foundation is there to turn Sarawak to be a high-income state. What is required is to face future challenges to ensure that everything that have been planned will be successful,” he said at ‘Majlis Sanjungan Budi Lambaian Kasih’ dinner which was held in appreciation of Taib’s services and contribution to the state and nation at a hotel here on Friday.

Taib expressed his confidence that Adenan would be able to lead Sarawak to achieve bigger success in the future.

“I’m happy to see the way Adenan works. I hope he will bring more success to the state in the future.”

Taib said when he was discharging his duties as a chief minister, he was assisted by a few leaders.

“Why do you have to thank me, this was a responsibility that was entrusted to me. I had worked together with other leaders.”

Meanwhile, Wahab said the event was held as an appreciation to Taib who had sacrificed a lot to develop the state.

“When we heard Tun (Taib) retired as a chief minister, the members of parliament and I planned to organise this dinner. This dinner is organised as a

show of our appreciation to our leader.”