Sunday, July 5
You are at:Home»News»Sarawak»Yo! Mawan dares youths to up the ante on recreational sports 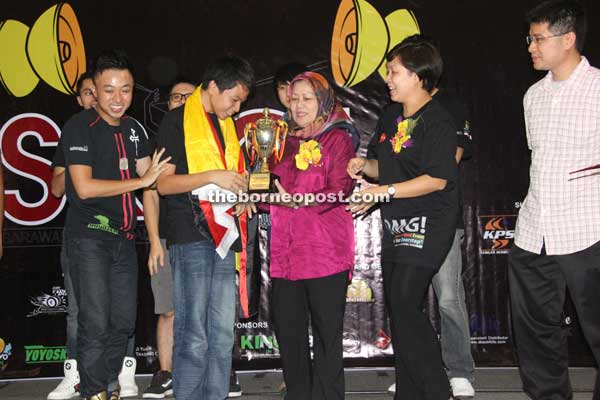 Aishah Edris, acting on behalf of Mawan, presenting the winner’s trophy to Adi Hisham at the Sarawak Regional Yo-yo Contest. Ryan Chung (at left), who is also event chairman, led Yoblitz Team Sarawak into the fray.

KUCHING: The government is looking into the possibility of promoting the state as a destination for youth sports, in line with the focus to promote a healthy lifestyle among the younger set.

According to Social Development Minister Tan Sri William Mawan, the youths should be actively involved in sports and dare to compete with their counterparts from other states.

“International events can be held here in the state with our youths capable of competing internationally and therefore I urge our youths to buckle up and get involved in sports,” said Mawan.

His speech was read by his representative Aishah Edris at the Sarawak Regional Yoyo Contest held in conjunction with ‘You Are The 1- Youth Carnival’ at Plaza Merdeka on Sunday.

According to Mawan, his ministry is committed to assisting youths by offering the right platform for them to be active in such sports.

“We are proud to provide support and commitment and this year alone, more of such programmes are in the pipeline, such as the I.M.A.G.I.N.E Retrowalk this coming October which is expected to attract thousands of youths,” he said.

The minister also lauded the effort by Yoblitz Team Sarawak and the 1BFF Sports and Recreational Club Pending for bringing the yo-yo event to Sarawak.

Meanwhile, event chairman Ryan Chung said the event which was held for the fifth time, was first held in 2010.

“It is our wish for yo-yo to get the attention from the state government and for consideration to be included as one of the sports in Sukma 2016 to be held in Sarawak,” he said.

The event, which saw judges comprising  world yo-yo champion Marcus Koh and Malaysian champion Mohd Shakeel, saw participants from Singapore, Indonesia and other states such as Sabah and Penang.

Sarawakian Adi Hisham Mohtar was crowned the winner and  will represent the state at the Asia Pacific Yoyo Championship in Singapore.