Thursday, April 9
You are at:Home»Features»Ideal hideaway from hectic city life 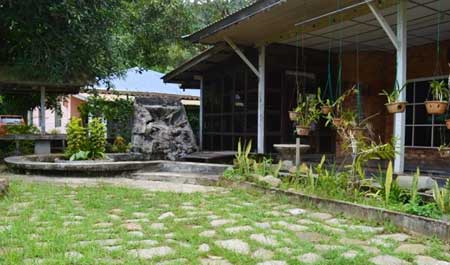 The calming effect and beautiful landscape at one of the homestays.

FOR a quiet getaway from the hustle and bustle of the city, staying the night at tranquil Santubong might be a good idea for a change of scene.

With plenty of attractions and activities such as hiking, mountain climbing, touring the Sarawak Cultural Village, sightseeing and enjoying the beach, Santubong offers a variety of choices to explore.

The legend of Mount Santubong is the tragic tale of two sisters – Santubong and Sejinjang, princesses believed to have descended from heaven.

Santubong was the expert weaver while Sejinjang an excellent rice thresher. When both princesses fell in love with a handsome prince, they began to quarrel over him and exchange blows.

To put an end to the quarrel, the King turned both princesses into mountains. It is said both mountains resemble women lying horizontally and the crack on Mount Santubong is said to be the scar on Santubong’s cheek left by Sejinjang’s fury.

Although only 810 metres high, the mountain is rather intimidating due to its steep slope towards the summit. Climbing to the top takes about three to four hours while descending is quicker.

So, it is advisable to start very early as the jungle can get dark as early as between 3pm and 4 pm.

Scaling the summit, you can enjoy the amazing view of the jungle and listen to the sound of Nature. Along the way, you might get cuts and bruises, a few encounters with insects and bugs and come across slippery and muddy pathways but once at the summit, it’s all worth it, knowing you have made it to the top on your own perseverance. 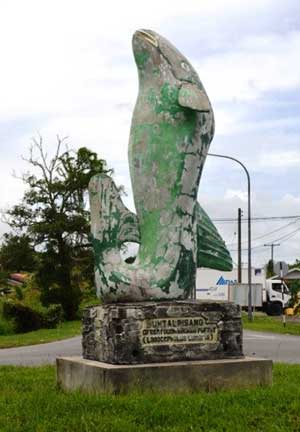 The giant puffer fish is the symbol of Kampung Buntal.

If you live near the water, you might want the chance to at least swim in the sea or go for a boat ride.

Ask any villagers with a boat and they would be happy to take you out on a cruise to catch a glimpse of the rare Irrawaddy dolphins, especially between April and September.

Irrawaddy dolphins or snubfin dolphins are mostly found in rivers, estuaries and shallow coastal waters such as at Burman, India, Southern Thailand, Mahakam River in Kalimantan, the Philippines and North-eas-tern Australia.

Santubong also happens to be one of the best places to spot them. Due to increased human activities that threaten their existence, the population of these dolphins is slowing declining.

In 2004, WWF and TRAFFIC, the world’s largest wildlife trade monitoring network, supported a ban on international live trade of Irrawaddy dolphins by the Convention on International Trade in Endangered Species of Wild Fauna and Flora (CITES).

However, visitors may have to keep a keen eye on these gentle creatures as dolphin sightings are not guaranteed on every boat trip. When you do see them, however, they can be seen swimming and diving around small fishing boats. 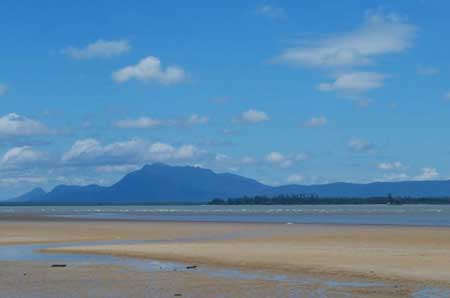 Enjoy the fresh air and a magnificent view of Mount Santubong from the beach.

Located not far from Kampung Santubong, Kampung Buntal is now a “favourite seafood place” for both local and tourists.

With a variety of dining places to choose from, visitors get to enjoy fresh seafood in an airy open restaurant, surrounded by the sea and with a spectacular view of Mount Santubong in the background.

Homestay Santubong is nestled in the peaceful and charming Malay fishing village called Kampung Santubong with Mount Santubong as a backdrop.

You can take a picture anywhere in the village and will still see Mount Santubong in your picture. With its spectacular view, fresh air and friendly community, it has a lot of attractions and activities to offer.

With over 15 houses offering with more than 21 guest rooms as a second home during their stay in the village, visitors get to experience the authentic lifestyle and culture of the local community.

Accommodation is reasonably priced and visitors get the opportunity to experience and participate in a traditional cuisine cooking demonstra-tion by their hosts. What better way to learn about a local culture than through spending sometime and engaging in various activities with the local community itself?

A short stroll through the village leads to the beautiful beach where you can enjoy the sunset and various beachside activities. If you feel like enjoying the cool breeze during the night, you can always opt for cam-ping at the beach.

Visitors not only get to sample the food and culture of the Kampung Santubong community but also experience a Malay wedding ceremony. Owner of Santubong Homstay, Jamilah Shukri, has hosted numerous mock weddings

Since she also happens to be the owner of a boutique called Anggun at Jalan Satok, various wedding costumes and bridal makeup packages are provided and you can be sure your mock wedding is in good hands.

The tomb of Sultan Tengah is one of the more historically significant sites in Sarawak. Originally from Brunei, Sultan Tengah was the second son of Sultan Muhammad Hassan, Brunei’s ninth Sultan who reig-ned from 1582 to 1598.

He was appointed the first Sultan of Sarawak by his eldest brother, Sultan Abdul Jalilul Akbar circa 1599. Before sailing to Johor, he appointed four state ministers to govern Sarawak upon his absence.

His return to Sarawak, Sultan Tengah survived a shipwreck near the coast of Sukadana. There, he met his wife, daughter to the Sukadana ruler.

She gave birth to a prince named Radin Sulaiman who was eventually married to the daughter of Ratu Sepuduk and became Sultan Muhammad Saifuddin I in Sambas. 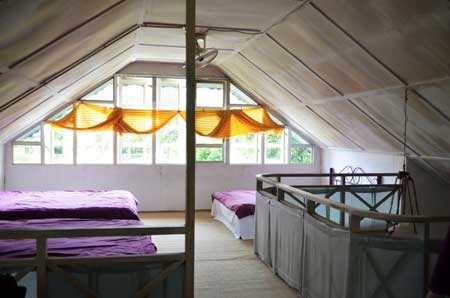 A family room in the attic.

In 1630, Sultan Tengah went to Matan where he married one of the princesses who gave birth to Pengiran Mangku Negara who later became the Sultan of Matan.

After a few years in Matan, Sultan Tengah went back to Sarawak where he stopped at a place called Batu Buaya in Santubong and was killed by one of his followers.

When his state ministers heard the news, they buried him according to royal Brunei tradition at today’s Kampung Batu Buaya. With his death came the end of Sarawak’s one and only Sultanate.

At Santubong Homestay, visitors get to plant their own trees in the yard as a momento of their visit.

But don’t worry about leaving your trees as they will be taken care of while you are gone. If you do plan on coming back the following year, don’t be surprised to see your trees bearing fruits and the whole yard transformed into an orchard.