Saturday, August 15
You are at:Home»Features»Kids Speak programme — Where kids speak up 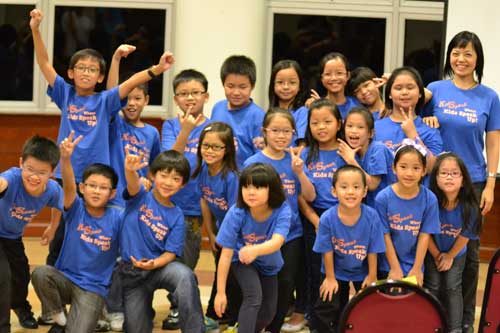 As a member of the  Toastmasters Organisation, such events are commonplace for me. But what piqued my curiosity was this event – or a showcase, as they called it — was for children.

True enough, when I got there, there were more than 20 children humming with excitement and 100 parents in the audience, waiting in anticipation to witness their children’s first public speaking event.

I talked to Joanne, a 12-year-old girl, and asked how she felt.

“Nervous!” was her reply.

Then her name was called and she went up to speak.

Within minutes, her speech was over and an appreciative applause resounded through the hall as she resumed her seat.

All in all, 22 children presented individual prepared speeches while the group presentations consisted of choral speaking and story telling.

The event was organised by Kids Speak, a new programme in town. Public speaking takes on many forms. In Kids Speak, the children are guided in preparing speeches to inform, impromptu speeches, story telling and choral speaking.

After the show I had a chance to catch up with Rebecca Chieng, the co-ordinator of the Kids Speak programme. 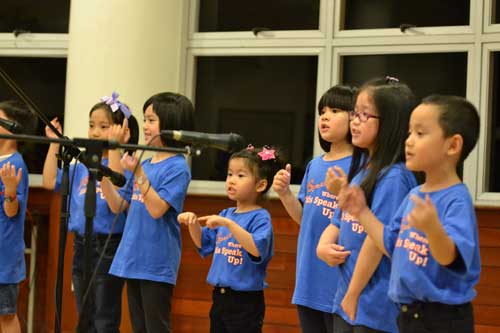 Dunstan Chan (DC): Congratulations, I’m most impressed with the performance of the children.

Rebecca Chieng (RC): You should have seen most of them when they first started.

Some were practically frozen, their arms were either pinned to their sides or their fingers were constantly fidgeting with their shirts when they were called up to speak. They have worked hard to get to where they are today.

RC: Yes, I strongly believe it is a skill that can be learned. Public speaking didn’t come naturally to me. A few years ago, I joined the Toastmasters International, a non-profit educational organisation that operates clubs worldwide for the purpose of helping members improve their communication, public speaking, and leadership skills.

I followed their programme keenly and in 2013 managed to win a place at semi- finals of the Toastmasters World Championship of Public Speaking, Ohio, USA. It was a contest which started with 40,000 contestants and the numbers were eventually whittled down to 90.

For someone who hailed from Kapit, which some may consider as a little back-water town of Sarawak and where English is hardly the lingua franca, I am rather pleased with my achievement.  All I want to do now is give children a head start in developing their confidence and skills. 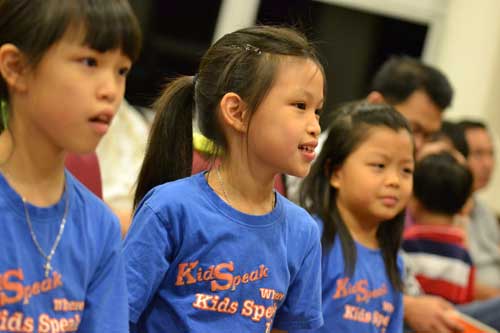 DC: How does Kids Speak benefit the children?

RC: Kids Speak gives children an avenue to find a voice of their own and to speak up.Ultimately, the aim is to build the child’s self-confidence through developing effective public speaking and communication skills.

Very often, we have read and come across graduates who may excel academically but are crippled when it comes to conducting a conversation and presenting themselves confidently.

As a Toastmaster, I have often met parents who drag their teenagers to our training meetings saying my daughter is going to university in two months, I want her to learn public speaking.

While it is never too late to learn, why not give our children an early foundation in developing these skills?”

DC: How is the programme conducted?

RC: The programme is currently for children aged 7 to 12 years old and classes are held at Eco Lodge Care Centre @ Taman Centurion, Jalan Stutong, once a week. It is conducted in small groups of 10 children or fewer.

This enables the facilitator to give the children personalised attention as well as plenty of opportunity for the children to speak. It also allows the children to build rapport with their classmates which makes it easier for them to overcome stage fright and anxiety.

DC: How do you keep the parents updated on the children’s progress?

RC: Parents will get regular updates on their children’s progress through constant communication – either through email or on a face to face basis, quarterly video documentation as well as showcases where the children will speak in front of them.

DC: And how are the children responding to it so far?

RC: Well, the children are enjoying it!

The activities are designed to make the speaking experience fun. Children, and even adults for that matter, learn best in moments of enjoyment. Once their creativity is given free rein, it is amazing what the children can come up with, the stories they can create and the opinions they give when they know they are not being judged or graded.

In Kids Speak, the children are guided in preparing speeches to inform, impromptu speeches, story telling and choral speaking. I take into consideration the children’s individual capability; personality and readiness while I assist them in their presentation skills e.g. appropriate body language and vocal variety.

The programme coordinator of Kids Speak can be contacted via phone at 016-8780221 or email <[email protected]>.For more details of their activities check out https://www.facebook.com/wherekidsspeakup.

Previous ArticleRansom was paid, says freed Filipina
Next Article How many birds can you see in your garden?