Wednesday, April 1
You are at:Home»News»Sabah»Folklore festival a bridge of friendship — Masidi 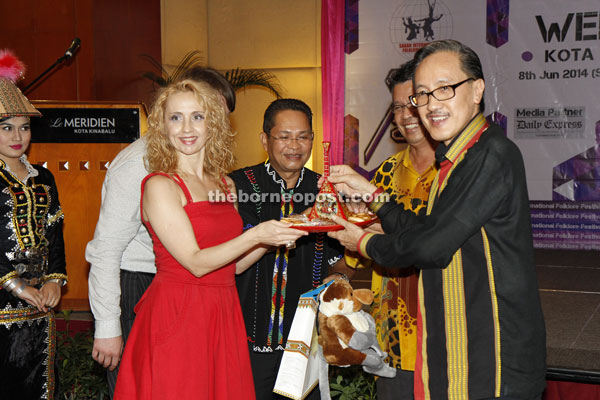 Masidi presenting a memento to one of the participants of the annual event.

Speaking at the welcoming dinner for the 9th SIFF 2014 participants here last night, Masidi said while the dance showcase may be minor in terms of importance compared to what is happening in the rest of the world, he believed it sent a message of peace and love to the world.

“We are sending a powerful message to the rest of the world that we are peace-loving countries. And that is the reason some of the participants took the trouble to fly thousands of kilometres to show the world that we want peace and all the people in the world are brothers and sisters,” said Masidi.

He added that Sabah which has the most diverse cultures in Malaysia wanted to showcase its peace and harmony to the participating countries.

“Sabah has a population of over 3.2 million but there are 32 ethnic groups speaking more than 50 languages. Race and religion have never been a problem and practically every Sabahan has relatives from the other side of the religious divide.

“I believe the different religious beliefs have never been a problem for us because we allow God to do His job well, and we don’t interfere in the manner God does His job,” he said.

Masidi said if there was any contribution from the SIFF, it would be the participants’ desire to tell the rest of the world that they would like peace in this world.