Monday, February 17
You are at:Home»Features»Bad moon rising — El Nino ahead! 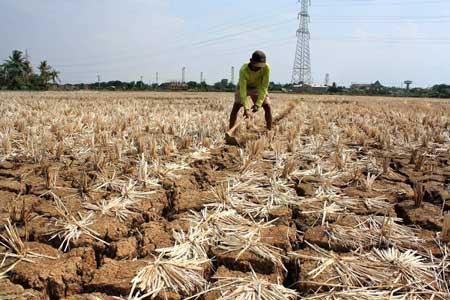 A padi farmer tills his parched padi field in Kedah. When El Nino strikes, staples such as rice will be heavily impacted.

WHAT happens when the waters of the Pacific come to a boil or at least get a lot warmer than usual?

Wild weather will rage across the globe, heating up Asia and Australia whereas floods will be unleashed in the Americas.

Right now, the world is sitting on the cusp of a phenomenon called the El Nino. An El Nino meteorites when waters on the Pacific side of Indonesia and the Philippines spark up in temperature – causing the regular monsoon rains of Asia and Australia to be blown away to the land masses of North and South America.

So while these two continents experience tornadoes and disastrous floods, El Nino will leave behind a parched Asia in its wake where drought famine and wild fires will be the order of the day.

La Nina occurs when the waters of the Pacific sea get cooler than usual. When La Nina strikes, the opposite effect of El Nino kicks in, triggering rains, thunder-storms and typhoons in Asia while the Americas will experience heat waves and drought.

Axel Timmerman of the University of Hawaii says the tropical climate system is primed for a big El Nino in the coming months while other meteorologists are expecting a devastating El Nino at the end of the year.

“Right now 150 metres below the sea surface a ball of warm water is crossing the ocean. It is huge,” says CSIRO’s Wenju Cai.

According to Krishna Kumar of the Pune-based Indian Institute of Tropical Meteorology, there is no other phenomenon that can influence the monsoon like the El Nino. If it weakens the Asian monsoons, it will threaten the food supply of billions of people.

While Asian countries experience a period of severe El Nino induced dry spells, the sea level along California’s coast may rise 30 centimetres and be pushed even higher by storm surges.

Kevin Trenberth of the National Centre for Atmospheric Research in Boulder, Colorado, says extra water may be a blessing as California is being hit by a severe drought but the raised water level may combine with heavy El Nino rains to cause devastating floods.

“This is what happened during the most catastrophic El Nino of 1997-98,” he cautions.

When El Nino strikes, Central and South America will be a quagmire of severe storms and flooding. Countries in these regions will be more vulnerable than the US as they are more financially impoverished, says David McEntire of the University of North Texas in Denton. 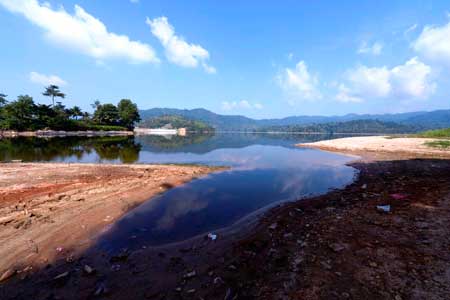 In the Line of Fire

Speaking to Lian Cheng of The Borneo Post last week, a spokesman for the Sarawak state Meteorological Department says: “It had generally been predicted El Nino will hit Southeast Asia, with some countries hit harder than others.”

According to him, El Nino will kick in less than six months or as long as 18 months.

“We are waiting for it. It may impact us very hard or it may not. We have to wait till July to know the severity of its impact,” the spokesman said.

However, the director-general of the Petaling Jaya-based Malaysian Meteorological Department, Datuk Che Gayah Ismail forecast that Sarawak and Sabah will be hit by drier spells than their counterpart states in Peninsular Malaysia.

According to Che Gayah: “The longer dry weather from June to November will be due to the El Nino effect and the dry south-westerly winds. Both these weather phenomena will impact on Sabah and Sarawak more severely than the Peninsular Malaysian states.”

She also pointed out that between July and September, Malaysia will receive 20 to 40 per cent less rain than the corresponding period last year. Peninsular Malaysia received below 200mm of rainfall last year, while Sarawak and Sabah registered 100mm and 150mm respectively last year.

While climate scientists warn that the 2014 El Nino could be one of the strongest in two decades – it seems that governments around the world are issuing conservative forecasts. The US National Oceanic and Atmospheric Administration said the odds of an El Nino would only exceed 50 per cent this year.

Most researchers feel official forecasters are downplaying the intensity of the 2014 El Nino. Of course, there is a reason for this, says Timmermann adding: “Forecasting a big El Nino would cause food prices to spike astronomically.”

However, he feels it may be better to have this reaction at an earlier stage, when there is still time for farmers to plan strategies and adapt to the impending disaster now than later.

But the good news is an El Nino is a known quantity.

Zafar Adeel of the UN University in Hamilton in Canada says: “We already know what could possibly happen when a big El Nino strikes. It means we can already identify vulnerable communities and have emergency plans put in place.”

However, he recommends that accurate local forecasts are crucial as large-scale regional forecasts can get the finer details wrong. 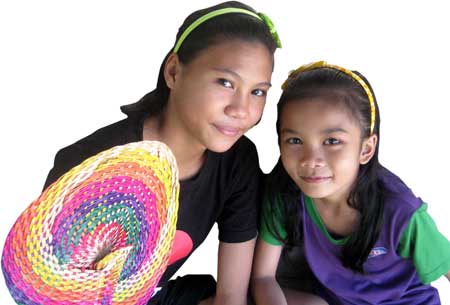 Cousin sisters Melanie Rose Ong (left) and Elizabeth Ruth anak Lawrence chill out in front of their house in Kampung Quop, Kota Padawan, armed with a straw mat fan. El Nino will cause drastic heat waves in Asia and these Sarawakians are already feeling the heat.

While making sedate El Nino forecasts, governments are not resting on their laurels either. Several Asian countries are scrambling to head off a potentially disastrous El Nino occurrence.

According to a recent Reuters report, Asia’s governments are concerned over food security issues that could largely impact on staples such as rice and other grains. Adverse weather phenomenon in the past has driven food prices to levels that sparked social unrest.

The Indonesian government is handing out calendars to farmers identifying earlier planting dates. In Malaysia and the Philippines agencies are working out ways to manage water supplies and India is bolstering its food stockpiles.

This committee will work with allied government agencies to monitor El Nino’s impact on its water sources. The government has also recently encouraged industries to tap under-ground water or to use recycled water stocks and increase the capacity of storage tanks.

In the Cagayan Valley in the Philippines, a dry spell has already set in with major dams at critical level. The region is the biggest rice producing area in northern Philippines.

According to the government, cloud-seeding has already been initiated with drought-tolerant rice varieties being introduced.

“We are putting in place policy initiatives, water management and conservation measures, as well as modern and innovative farming and fishery technologies to somehow soften the effects of this dry weather,” Agriculture Secretary Proceso Alcala told Reuters.

In Indonesia, farmers are being trained in ways to adapt to changing weather patterns, and depending on the province, are urged to plant alternative crops to rice such as those that cope better in a drier ecosystem.

India is clinging on to its largesse of staple foods such as rice, wheat and sugar – thanks to bumper harvests in the last few years, while Thailand is in the process of selling down rice stocks built up during an ill-fated subsidy scheme.

Based on scientific predictions, there seems to be a bad moon rising on the horizon.

The National Aeronautics and Space Administration (NASA) has issued a warning that El Nino 2014 will be as bad as the El Nino of 1997-98.

According to the agency’s website, A pattern of sea surface heights and temperatures have formed and these are reminiscent of the way the Pacific looked in the spring of 1997 when El Nino roiled up.

In 1997, El Nino rose out from the tropical Pacific. It bore more energy than a million Hiroshima bombs. By the time it ran its course eight months later, the giant El Niño of 1997-98 had deranged weather patterns around the world killing 20,000 people and causing damages to the tune of US$97 billion.

So how much more devastatingly will the El Nino of 2014 propel its trajectory?

That governments across the world are putting contingency plans on the drawing board is laudable.

Scientific data by all counts suggest is the season to wary and it is not the time to throw caution to the wind.

Previous ArticleA round up of the ‘new’ in the natural world
Next Article First ever resort-style school, SK St Bernard Sadir