Thursday, February 2
You are at:Home»News»Sarawak»State has huge potential to produce marine prawns
For the freshest news, join The Borneo Post's Telegram Channel and The Borneo Post on Newswav. 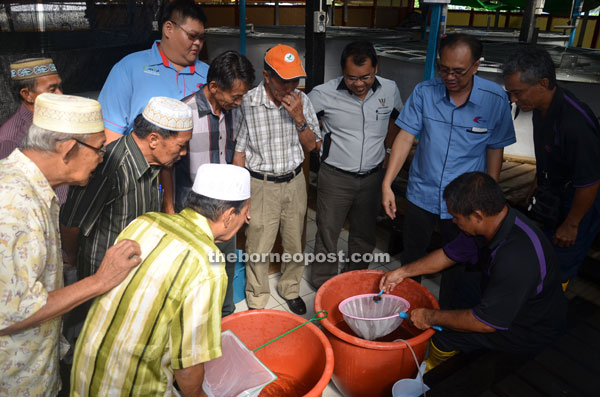 Bohari (standing second right) and others watch as the Belawai Prawn Larvae Hatchery Centre staff prepare the prawn larvae to be released into the sea.

BELAWAI: Some 3,000 hectares scattered over several places in the state have the potential to be turned into marine prawn farms capable of generating RM1 billion in revenue annually.

“Collectively, they can produce about 80,000 metric tonnes of marine prawns per year.

“Five billion marine prawn larvae are needed to support the production of 80,000 metric tonnes of shrimps. At the moment, there is only one prawn larvae hatchery centre in Belawai with a production capacity of 24 million larvae per year,” he told reporters here yesterday.

He had earlier released one million tiger prawn larvae into the sea.

Bohari said the production of tiger prawns in the state in the 1990s was quite active due to high market demand.

But now the demand had shifted to white prawns.

He said many aquaculture farm operators in the state had started rearing white prawns, which had a shorter maturity period and low operating costs.

“White prawns can be harvested when they reach three months old while tiger prawns need six months to mature and it involved higher operating costs.

“The market price for tiger prawns is RM22 per kg compared to RM20 per kg for white prawns.”

He added that Sarawak exported processed white prawns to USA, Europe and Middle East, besides the domestic market.

“But now there is a decrease in white prawn production due to the early mortality syndrome, which also happened in countries like Vietnam, Thailand and China.”