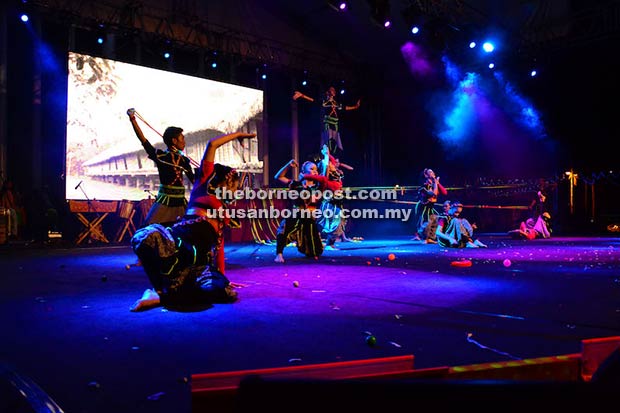 Performing art group from Kudat showcasing the Rungus dance with some innovations.

“One of the new peformances held on the first night of the festival is the fashion show by Cosmopoint College in Kota Kinabalu where its students show their fashion design based on the ethnic groups in Sabah,” he said, adding that a few other new performance categories were featured while retaining the other categories during the first edition of BAF.

He explained that the participation in this year’s BAF was slightly affected due to the clash of events of the Rainforest World Music Festival and school dance competition in Kuching and other events in Sabah and Putrajaya.

“After getting the feedback, we probably will organise the third edition of BAF in September next year,” he said.

Mahathir added that they were still consistent with their objective of BAF, as a platform to gather all the performing artists around Borneo, while giving chances to the local especailly the non-elite schools to show their talents.

“Next year, we are planning to hold Award Giving Programme in BAF to appreciate the performing artists in Borneo,” he said.

Mahathir said that the difference between BAF and Labuan Arts Festival (Lafest) is that BAF focuses on performing arts, while Lafest focuses on contemporary art organised by Labuan Tourism Ministry Office.

Meanwhile, one of the participants in BAF, Ary Romoldeo Martin, 17, said that he felt excited at joining his school, SMK Tenghilan to perform at BAF.

“We have around 50 students and 13 teachers coming here for this event. I am happy to be here, as this is my first performance outside of my place and I would get new experience.

“We are performing ‘Tulun-Tulun’ Dance, a traditional dance in Tenghilan where we are using musical instruments mostly made from bamboos. I play the ‘suling’ (flute). It is also good to watch other performances from other troupes,” he said, adding that some seven other troupes performing during the opening night of BAF.

Meanwhile, his schoolmate, Abi Meil Lisa who played the ‘cajon’ also shared Ary’s excitement at the chance of performing at BAF.

Abi said that he and the musical group members from his school also performed in Taiwan last year.