Monday, September 21
You are at:Home»Columns»Perspective»Don’t prick our balloon 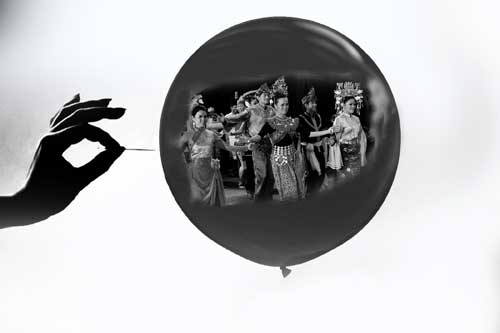 Nearly six years ago, I was sitting in my friend Zaiwin’s house, soaking up the atmosphere. It was friendly, it was convivial, and it was warm. We were on our Hari Raya visit. There were as many non-Muslims as there were Muslims in the house, eating and chatting – a picture of what we want our country to be. The scene was repeated in the many houses we visited that day.

At that time I wrote, “It was like a breath of fresh air. Especially after the gloom of the previous month when certain people, in trying to further their own political ambitions, resorted to making racist remarks and stridently aggressive declarations, questioning the right of Malaysians to live in peace and harmony. It was thus with gloom and trepidation that we view the antics of ruthless politicians, recklessly courting the evil genie of irrational and mindless behaviour. History has shown us that once this genie is let out of the bottle, its appetite for violence is not easily satisfied.”

That was six years ago. If we viewed the situation then with gloom and trepidation what do we make of the present, where bigots are crawling out of the woodpile brazenly spewing their venom? What have they been doing? In case we need reminding let me just list some of the things they do in the name of protecting the sanctity of their religion.

They seized some people’s holy book because it contains a reference of the Almighty in a name that has been universally used for millennia but one that they insist to be exclusively theirs; they gatecrashed a wedding in a sacred place to arrest the bride on the pretext that she is a Muslim; they snatched the body of a Buddhist in the middle of the funeral rite; they organised a seminar and engaged charlatans and fake scholars to attack another religion; they label Malaysians not of their specific race “intruders” – Malaysians, who by the sweat of their brow, strength of their backs and the blood in their veins help to build this country. The list of their nefarious deeds goes on ad nauseam and there is no end in sight.

Everyday we have unscrupulous ill-intentioned men donning the robe of academia and/or that of learned religious teachers foisting their unlearned and unholy views on the and apparently cowed population.

Let me just digress for a moment to give you this latest codswallop. According to a report in a Malay news portal Sinar Harian Online, Datuk Daud Che Ngah said women might be aroused by the sight of athletic men wearing shorts.

“If a woman watches a football match, they will indirectly see the ‘aurat’ (the area between the navel and the knee) of the players,” said this Datuk and religious teacher. This Islamic preacher warned Muslim women to be mindful when watching the on-going World Cup football tournament, saying they may be committing “zina mata”, or literally “visual fornication”.

“Watching the ‘aurat’ until it causes sexual excitement can be categorised as ‘zina’ (illicit sexual intercourse between two individuals) of the eye,” the preacher added.

I was reading a book on communication and came across a concept called the Monroe sequence. It is a technique for organising persuasive speeches that inspire people to take action. It was developed in the mid-1930s by Alan Monroe at Purdue University. It consists of a five-step procedure.

Step One: get the attention of your audience by using stories, humor, a shocking statistic, or a rhetorical question – anything that will get the audience to sit up and take notice.

Step Two: establish the need by convincing your audience that there is a problem and telling them that what is happening right now isn’t good enough – and it needs to change.

Step Three: offer your solution to satisfy their need.

Step Four: describe what the situation will look like if the audience does nothing. The goal is to motivate the audience to agree with you and adopt your behaviors, attitudes, and beliefs.

Step Five: action and actualisation, to leave your audience with specific things they can do to solve the problem.

Think of all that have been going in the last few months. Certainly they have got the attention of their target audience, they try to convince them that their religion and race is under attack and hence the need of their unique prescribed solution which boils down to denying everyone else their citizens’ rights guaranteed by our constitution.

What do our political leaders do in the face of this onslaught of bigotry and extremism? Nothing! In fact they seem to have moved from ineptitude to tacit support. Take for instance the view of the Education Minister Tan Sri Muhyiddin Yassin in reply to the criticism of the anti-Christian seminar organised by a public university. It was a religiously charged and overt attack on Christianity but the Minister chose to brand it as a form of “intellectual brainstorming that should be viewed positively”.

I started with congratulating us in Sarawak in achieving unity in diversity. The recent events remind us to be ever mindful that peace and harmony are fragile. We must do our utmost to preserve them.

It reminds me of something I read a Haiku (a Japanese form of verse written in three lines with highly evocative allusions and comparisons) many years ago. It was written by my six-year daughter.

An evil strong wind is blowing on the other side of the ocean. Let us erect a strong barrier to stop its influence from affecting the peace loving people of Sarawak.