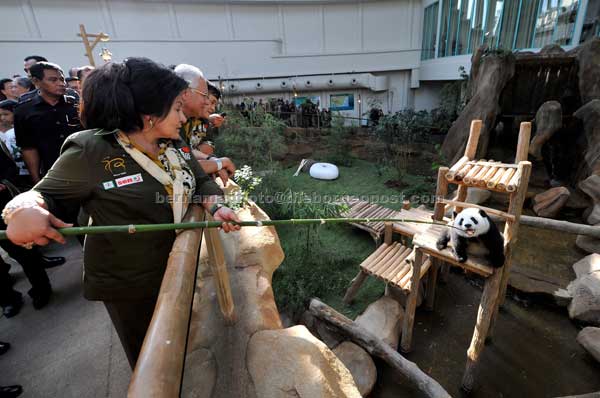 Rosmah feeding Liang-Liang at the Giant Panda Conservation Centre at the National Zoo in Kuala Lumpur as Najib and others look on. — Bernama photo

The prime minister said the names were chosen from the results of the national-level competition to name the pandas organised by the Natural Resources and Environment Ministry in 2012.

“We know that the giant pandas have Chinese names, but we also want them to have Malaysian names, especially when they have to be here for the next 10 years.

“I hope the pandas will not get confused as they now have two names — Chinese names and Malaysian names,” he said jokingly when opening the Giant Panda Conservation Centre and the 50th anniversary of the National Zoo here yesterday.

Najib said the pandas should be given local names to lure more people to visit them at the zoo.

On the construction of the RM25 million giant panda conservation centre, Najib said it was apt as the amount of trade between Malaysia and China had increased to over US$106 billion last year from US$200 million in 1974.

“Not all of the RM25 million spent for the project was provided by the government. In fact, the government only provided RM10 million, while the remaining RM15 million was funded by the 1Malaysia Development Berhad Foundation,” the prime minister explained.

Meanwhile, Najib said the centre would be open to public starting on June 28 and certain special quarters would be able to watch the panda without having to pay any entry fees.

“Children, orphans, senior citizens and persons with disabilities will be allowed to enter the centre free of charge for 30 days,” he said.

Before leaving, Najib, accompanied by his wife, Datin Seri Rosmah Mansor, also visited the entire area of the conservation centre, signed the opening plaque and fed the giant pandas. — Bernama