Friday, June 25
You are at:Home»Business»SugarBun looks to Indonesia, aims for 20 new outlets by 2018

KUCHING: SugarBun, the leading quick service restaurant (QSR) in East Malaysia will chart yet another overseas achievement in Indonesia, with the establishment of its outlets in the world’s third most populous country. 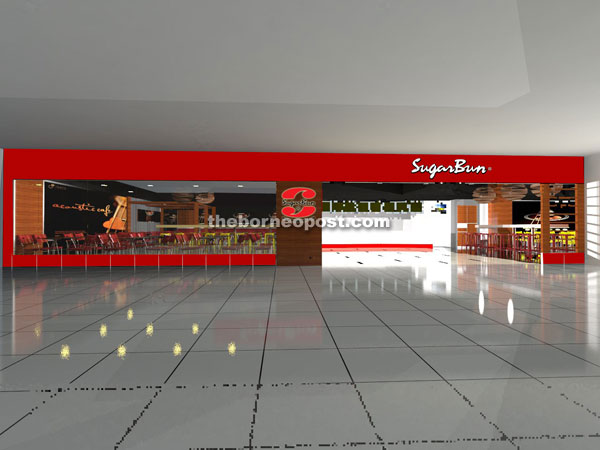 Photo shows an artist impression of SugarBun Ayani MegaMall. Home-grown SugarBun will chart yet another overseas achievement in Indonesia, with the establishment of its outlets in the world’s third most populous country.

Established in 1979, SugarBun in a press statement said PT Mitra Adidaya Perkasa was awarded with the exclusive area franchise to develop and operate SugarBun Restaurants in West Kalimantan, Jakarta and Medan.

The signing ceremony of the memorandum of understanding (MoU) between SB Franchise Management Sdn Bhd, the appointed Franchisor by Borneo Oil Bhd of Malaysia and PT Mitra Adidaya Perkasa was witnessed by Dato Sri Hasan Malek, Minister of Domestic Trade, Cooperatives and Consumerism, Malaysia and also Ministers from Indonesia at the recent concluded Malaysia Indonesia Business Expo (MIBEX), 2014 at the Jakarta Convention Centre.

The first SugarBun Restaurant in Indonesia is currently under renovation and is scheduled for opening in the middle of July this year.

Situated at the biggest and most patronised shopping mall in Pontianak, Ayani MegaMall, SugarBun Ayani covers a total area of 3,000 square feet with over 200 seating capacities.

Previous ArticleTanjung Manis Port to cater for 220,000 TEUs by 2018
Next Article More room for Pestech to grow with upcoming tenders