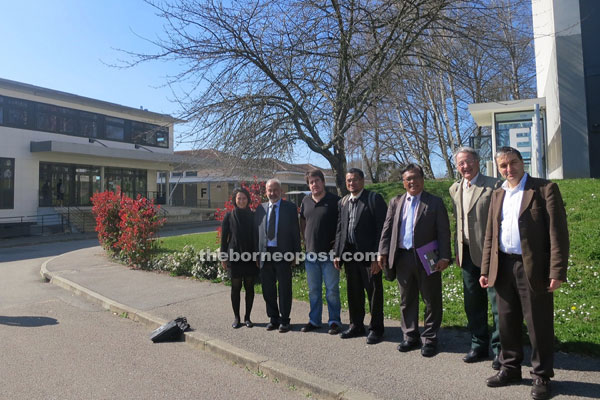 Kadim (third right) is seen with some of the French Ministry of Higher Education representatives in France.

A press statement said the ministry through its representatives assured Unimas of all possible help to build a strong and sustainable link between the higher education institutions of Unimas and the universities visited by the delegation.

Unimas was part of a group of 11 Malaysian universities that signed a Memorandum of Understanding (MoU) with Conference des Presidents d’Universite (CPU) of France in 2008.

In the collaboration, a jointly supervised double PhD programme was started between Unimas and Universite de Limoges through a Memorandum of Agreement (MoA) in July last year.

Under the MoA, a PhD candidate is to be jointly supervised by professors from Unimas and Limoges, a university well known for its hi-tech research labs in the field of ceramic materials and surface engineering.

The first PhD candidate selected under the programme has started working on the development of low temperature Solid Oxide Fuel Cells (SOFCs), and the applications of the research are intended for the automobile industry where future vehicles are designed to be environmentally friendly and energy efficient.

The success of the first collaboration with Limoges prompted Unimas to spread the breadth of networking over other domains of learning.

As a leading university in the state, Unimas is constantly seeking ways to achieve excellence nationally and internationally.

The university focuses its strength on teaching, learning and research, and has successfully forged strong collaborations with its overseas partners over its 22 years of establishment.