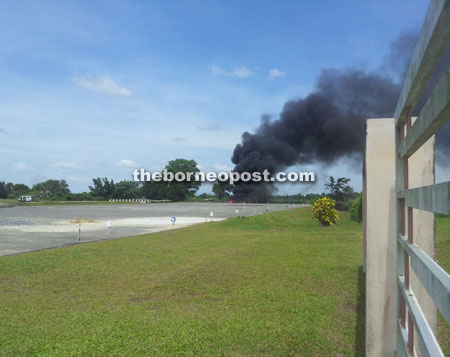 The burning mound sending out a plume of smoke at the Miri Go-Kart track.

MIRI: A tell-tale plume of smoke could be seen as far as 5km away from the Miri Go-Kart track in Permyjaya yesterday afternoon, and traced to a burning mound of used tyres. It was said that the fire broke out around 11am, sparked by a bush fire nearby.

Two fire engines with six firemen spent over an hour tackling the blaze. As black smoke filled the skyline over Permyjaya area, curious onlookers from the surrounding areas thronged the scene to take photos.

Firemen managed to put out the blaze around 12.35pm.

Fortunately, firemen from Lopeng and Miri Fire Station managed to put them out.