Saturday, June 6
You are at:Home»Business»Prudential sees big potential for takaful business in Sarawak 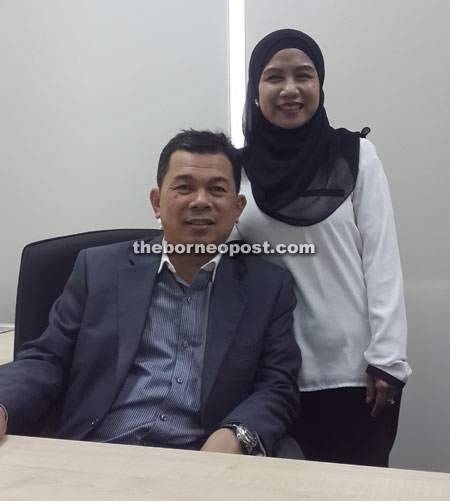 Firdaus and Norlia who have been serving more than a decade in the insurance industry believe that takaful has big opportunities to grow in Sarawak and througout the country.

A Prudential senior agency mananger said the local market is widely untapped and believed that the increasing level of awareness on standard of living and quality healthcare will attract people to obtain more protection services.

Firdaus Lau Abdullah, a senior agency manager with Prudential said, “For the whole Malaysia, there are still a significant percentage amount of people who do not have insurance.

“A statistic which was conducted not so long ago revealed that there are just 11 per cent insurance penetration rate throughout Malaysia.

“Therefore, the remaining 89 per cent are still in need of insurance and the market is huge.

“In Sarawak, there are a lot of Bumiputera and they will require insurance services for instance takaful as the standard of living keeps going up and people require better healthcare services,” he told The Borneo Post when interviewed recently on the sidelines after Prudential’s carreer talk held here on Saturday.

He added that Sarawak is a land of rich resources which enables its economy to grow strongly.

He explained that as the economy grows, people will need more insurance as a solution for retirement purposes or financial benefits against illness.

Firdaus who hails from Kelantan and comes here from Kuala Lumpur, also observed that there are more private hospitals being built compared to the last time he visited Kuching several years ago.

He noted that the rising number of private hospitals showed that people wants better and quality healthcare for their families and loved ones. He added, insurance is one of the services which can reduce the financial burden of the people in the event that they are struck with certain illness.

Meanwhile, Firdaus pointed out that Prudential BSN Takaful Bhd’s (PruBSN) business has a leading market share in the takaful industry.

His view was in line with PruBSN which had recently reported that its new business increased 15 per cent to RM265.7 million on an annual contribution equivalent (ACE) basis for the financial year ended December 2012.

PruBSN added that the results has confirmed the company as the leading takaful provider in Malaysia with a market share of 28.4 per cent.

PruBSN noted that its strong financial performance in 2012 was achieved due to the strength of Prudential’s franchise in Malaysia, its robust multi-distribution channel strategy and new product launches.

On a side note, Firdaus’s wife, Norlia Hassan is one of the top agents for Prudential Malaysia and was awarded the top Bumiputera agent for 2010 and 2011; attributable to her strong determination and willingness to live a better life with her family.

She observed that having been in the insurance industry for more than 14 years and gaining numerous awards with Prudential, she followed a good system which include several attributes such as discipline, determination, sincere, sacrifice, structure, persistent, goals setting and willingness to learn.

Norlia revealed that during her earlier days in the industry, she approached approximately 50 to 100 people a day to educate people about the need of having an insurance. Norlia said her inspiration is her children and her aspiration is to have a better standard of living with her family members.

As for Firdaus who has more than 19 years of experience in the insurance industry, he said he considers success as living financially independent and having a balanced life in work, spiritually and in social life.