Saturday, August 15
You are at:Home»Features»Geology walk at Santubong National Park 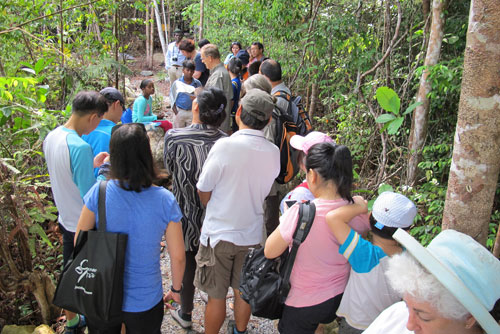 Participants listen to a briefing by Hans before the walk. — Photo by Peter Lai

CRUSTS, caramel, nuts in porridge – they sound more like a cooking lesson than a walk to learn about geology.

However, these are the striking analogies Hans – a geologist with Shell in his former life – and a dedicated nature lover and photographer, used to explain to us about the ways rocks have behaved over the geological time scale.

Some brave, and fit, souls actually climb to the summit, but last month, about 30 MNS members took a much gentler walk from the newly operational Santubong National Park headquarters as far as the waterfall with the canopy bridge.

We walked slowly as Hans explained about continental and ocean crusts.

Oceanic crust, on the other hand, is located under the oceans and mainly composed of different materials known as basaltic rocks, which are mostly dark in colour.

Over the aeons, different crustal slabs slide or ‘dive’ under one another, releasing enormous forces that often push up continental rocks (but sometimes oceanic rocks are pushed up).

That is part of the story of how, Hans explained, Gunung Santubong, which seemingly arises almost directly out of the sea, was formed. Another piece of the puzzle may be found in the intrusive rocks found at Santubong.

How can we detect where these slabs of crust (known as tectonic plates) have dived under one another? One important clue, Hans explained, is when we see dark-coloured basalt rocks, usually hidden under the oceans, at the land surface. 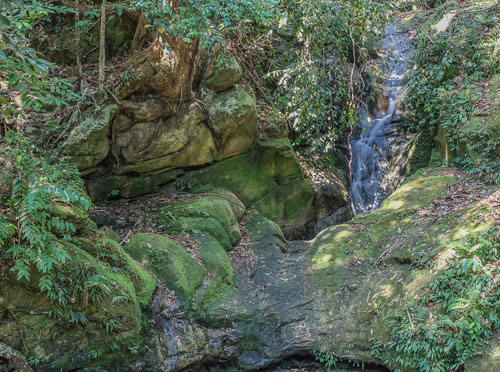 Cross-bedded sandstone is seen here in a huge boulder found in the forest at Santubong. The inclined layers or cross beds tell us that originally the sand was deposited in a big river, river mouth, or in the shallow sea near a river mouth.

One of the big boundaries between crustal slabs in Sarawak corresponds approximately with the Lupar River.

One can see dark-coloured basalt rocks on a bank of the Batang Ai hydroelectric lake. Interestingly, though not surprisingly, some tree species are only found on one side of the Lupar valley dividing line, while others are only found on the other.

So how about the caramel? The cooks among us will know that to make kueh sarang semut, one first has to make caramel.

This we do by heating sugar carefully in a pan until the mass of white crystals begins to melt to a shiny liquid and darken in colour.

In the same way, Hans explained, showing us a sandstone rock that was pale brown on one side and dark brown on the other, some of the sandstone at Santubong has been heated up by hot magma injected into narrow cracks in the sandstone, and has undergone a similar change, with the melted part not gritty like normal sandstone but smooth and also darker in colour.

After melting, the rock is known as hornfels, (a German word for horn rock) as smooth as the horns of a cow.

This is where the nuts in porridge example comes in – an example of rock that was injected as hot paste into cracks of the sandstone is diorite – which cooled very slowly when still deep underground, so that some components made big crystals of mainly feldspar and hornblende (the nuts) floating in a fine-grained mass (mainly feldspar).

Then Hans explained some of the other geological features we can see at Gunung Santubong.

The sandstone layers dip with a gentle slope of 10 to 200 from the summit to the park headquarters, and this represents the bedding plane or flat surface of river or sea, before the mountain was pushed up into its present shape.

We can also see deep cracks (fault scarps) running parallel to the crest of the mountain (north to south), and these are where parts of the mountain have slumped down almost vertically.

Other features at Santubong are huge rounded rocks with a mass of several tonnes in the stream beds, and amazingly, said Hans, the force of river water in flood can actually move them, knocking off any sharp corners.

Someone asked about the mysterious big rocks lying at random points all over the mountain. Hans explained that tens of thousands of years ago, in the periods between ice age when it was very wet in the tropics, avalanches on steep slopes caused these rocks to arrive at their current destinations.

So, finally, after absorbing all these concepts, we arrived at the canopy bridge over a big waterfall, where we sat down and ate our snacks.

The water level was low as there had not been much rain recently, making it easy to detect. With Hans’ careful tutelage, from a point on the canopy bridge, we could make out three bedding planes, representing ancient river or seabeds, each with a thick underlying layer of sandstone.

When you see the waterfall from the suspension bridge, you can notice more or less flat surfaces directly below the water.

These surfaces are original surfaces of deposition of the sand, and they are called bedding planes. When the sand was buried deep below other layers, it came under high pressures and temperatures, which compacted the loose sand grains into solid rock, called sandstone.

Later, huge forces in the earth’s crust caused the rocks to be uplifted and over millions of years rain, heating by the sun in daytime and cooling at night, the overlying rocks disintegrated (called weathering) and the sandstone became exposed at the surface.

We could even make out signs of cross-bedding – big rocks with lines running across – left by the scarp (steep) slopes of ancient ripples in the sand deposited in a river, river mouth or shallow sea in aeons past.

All in all, it was a quite fascinating trip, and we will now see in a different light the features of Gunung Santubong, which we see from the road as we approach Damai and Permai, now that we know some of the reasons they came to be. And a big thank you to Hans! 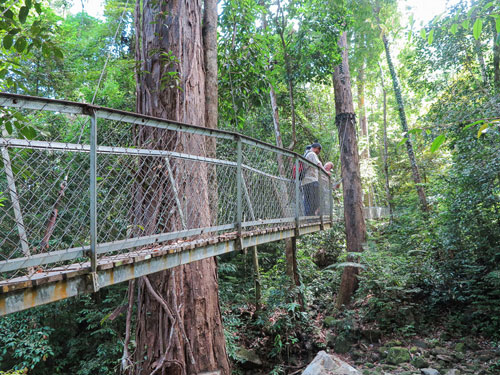 Participants at the waterfall bridge learn about geology. — Photo by Cynthia Lobato

The Malaysian Nature Society
Established in 1940, the Malaysian Nature Society is the oldest scientific and non-governmental organisation in Malaysia. Our mission is to promote the study, appreciation conservation and protection of Malaysia’s nature heritage. Our 5,000-strong membership, spread across 12 branches nationwide, come from all walks of life, bound by a comment interest in nature. For further information on membership or our activities in Kuching contact us at mnskuchinggmail.com. For information on our activities in Miri contact Musa Musbah ([email protected]). You can also visit www.mns.org.my,
http://[email protected] or www.facebook.com/mnskb.