Saturday, December 3
You are at:Home»Features»Try the healing waters

NATURAL hot springs with geothermally heated under-ground water can be found in some parts of Sarawak.

There are two popular sites in Kuching – Annah Rais in upper Puncak Borneo Road and Kampung Panchor Dayak in Serian.

Both are Nature’s gifts to be treasured.

I relished my time relaxing and letting the mineral-rich water flow into my pores in both hot springs.

I was told by Panchor hot spring staff some people made it a practice to visit at least once a month for their health – and sanity!

Water from the Annah Rais hot spring is a bit clear while that at Panchor appears slightly yellow-brownish or milky.

It has been widely speculated that hot spring waters are laden with sulfur, silica, radium, selenium, boron, magnesium, manganese, lithium, calcium, sodium, potassium, silver and many other minerals.

So far, no studies have been made to detect the presence of dissolved minerals in both hot springs here.

The Annah Rais hot spring, believed discovered about 300 years ago, was open to the public in 2011.

Co-operator Ringin Edo said the early settlers regarded it as a holy place to seek charms and blessings.

“According to my grandfather, long time ago, people who believed in the power of superstition, would go to the place to meditate.

“They would bring some something with them such eggs, bananas, local potatoes, betel leaves and tobacco as offerings to the evil spirit there.

“They would also sing some folk songs to praise the spirit,” the 63-year-old recalled.

Ringin said while meditating – normally between 8pm and 10pm – a person would remain still even if beaten by mosquitoes or other insects, or seeing strange things, animals or snakes passing by before the spirit appeared.

The spirit would then ask the person what he wanted.

“According to my grandfather, in the old days, men liked asking for charms so they could marry the women of their fancy.

“However, more often than not, the spirit would tell them he could not fulfil their wish because he has no power and could do nothing.”

Ringin, a former teacher, also related a story told by his grandfather about an old woman who went to meditate in order to seek help from an evil spirit to heal her eyes.

The woman was almost blind but after the meditation, she could see.

“It was just a story or coincidence – nothing more than that. Or maybe superstition. It’s up to the individual,” Ringin surmised.

However, he pointed out that soaking in a hot mineral spring at Annah Rais could help relieve joint pains.

“If a person has a swollen ankle, he or she can dip it in the bearably hot water three or four times and it may heal. I have tried many times and it worked.” 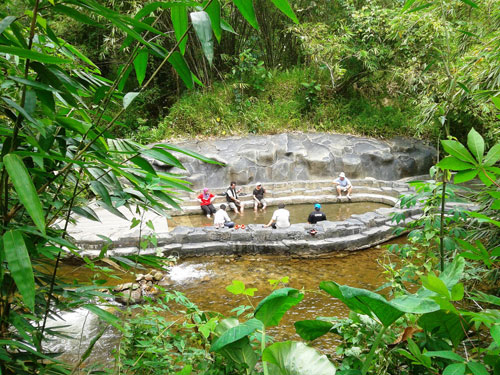 The Annah Rais hot spring is a natural feature, caused by underground water, being heated by geothermal forces and brought to the surface where it empties its hot water into Sungai Semadang, more commonly known as Sungai Sarawak Kiri.

There are two pools there – one bigger than the other.

Visitors may sit around the bigger or smaller pool or dangle their legs in Nature’s hot tub.

There is a small leakage in the smaller pool in the middle of the river. If not for this, the water will be much hotter than the bigger pool’s.

The leakage allows the cold water from Sarawak Kiri River to enter and reduce the temperature.

Ringin said without the leakage, one could boil eggs in the smaller pool – but whether the egg is safe to eat or not, he isn’t sure.

Although there is no scientific evidence to show the presence of dissolved minerals in the water, he believed the Annah Rais hot spring contains calcium sulphate, magnesium and silica.

These minerals are said to help heal joint and muscle aches.

The Annah Rais hot spring attracts both locals and tourists but whether they come for the healing or not, Ringin can’t say.

The busiest days are normally Saturday, Sunday or public holidays and on average, 100 people come to soak in the springs. On weekdays, the visitors are mostly tourists.

Visitors can choose between hot and cold water. To cool off, they may just sit on the shallow cold pebbly or sandy riverbed. A few outdoor showers and changing rooms are available.

On reaching Annah Rais longhouse, cross a Bailey bridge and proceed along an about 1km stretch of gravelled road before coming to another Bailey bridge.

After crossing it, continue driving and look to the right for a wooden building with a signboard – Welcome to Annah Rais Hot Spring.

Like most hot springs, the water at Panchor, about 40km from Kuching City, is also believed to contain various dissolved minerals which can cure certain diseases and even heart ailments.

The Kampung Panchor headman’s heart problem is said to have improved after he soaked in the hot spring everyday for six months.

Some like putting mud from the hot water on their skin, claiming it did “some wonders” to the skin.

Bathing in hot springs has been considered a popular relaxation activity because of its so-called health benefits.

Although modern medicine has been slow to establish the scientific basis for the benefits of this long-held practice, its lengthy history serves to validate its soothing beneficial effects.

It is believed the healing properties of hot springs generally come from their mineral compositions. Hot springs water generally warm or even hot.

Crossing several layers of rocks on the way up, the hot spring water emerges at the surface as mineral water whose properties vary from place to place, and even from one hot spring to another.

Thus, most of the health benefits of hot springs come from their mineral composition and the geothermal energy underground where they spring from.

A soak in a peaceful, mineral-rich hot spring is widely thought to help relax stressed muscles and relieve joint pains.

The complex way hot springs affect the skin glands and blood vessels may be the reason behind the various subtle health benefits reported by people who like to bathe in hot springs.

A soak in a hot spring causes a slow increase in the body temperature, thus killing harmful germs and viruses, especially those in the skin.

Bathing in thermal water increases hydrostatic pressure on the body.This promotes blood circulation and facilitates oxygen transport into the cells all over the body thus, improving the nourishment of vital tissues and organs.

In addition, the facilitated blood circulation helps dissolve and remove toxins from the body. 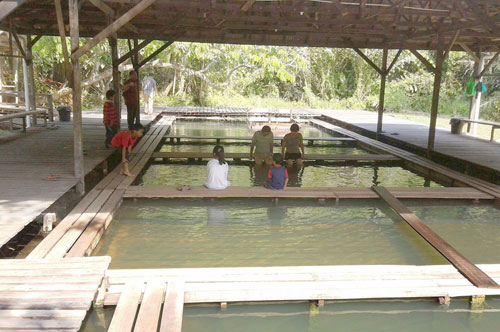 Another health benefit of a hot spring bath is the supposed increased metabolic rate, including the triggering of the secretions of the intestinal tract and the liver that facilitate digestion.

Frequent bathing in hot springs (especially over three to five weeks) is also believed to help normalise the functions of the endocrine glands and the autonomic nervous system.

During a hot spring bath, the body absorbs trace amounts of minerals such as carbon dioxide, sulfur, calcium, magnesium and lithium.

These trace minerals help provide healing effects to different organs and systems in the body.

These seemingly subtle health benefits include increased immunity due to stimulation of the immune system; physical and mental relaxation; endorphin production; as well as gland function normalisation.

The water of a mineral-rich hot spring is high in negative ions, which can help promote feelings of physical and psychological well-being.

Moreover, the direct application of mineral-rich thermal water (particularly that which contains sulfur) can be therapeutic to various skin diseases, including psoriasis, dermatitis and fungal infections.

This may be the reason why some doctors recommend hot spring soaks to such patients. Some mineralised waters are also used to facilitate healing of various wounds and other skin injuries.

Lowering blood pressure is another significant health benefit of a hot spring bath.

Nevertheless, it is important to consult your doctor first whether a hot spring bath is good for you, especially if you suffer from a certain chronic condition.

THERE is nothing that makes me feel better, physically, mentally, or emotionally, than a long soak in the searing hot mineral springs at Annah Rais.

I feel my joint aches fading away along with my stress and cares – my soul is restored and I feel like myself again.

My second visit to the hot springs about two weeks ago made me feel like going back again.

The art and science of balneology is not well known or widely practised in Sarawak although the use of hydrotherapy or balneotherapy is increasing dramatically worldwide.

In fact, in modern Europe and Japan, the medical science of balneology is already an integrated part of allopathic medical practice and preventative medicine.

It is reported that in France and in Japan, “taking of the hot spring waters” is covered by the national health care plan.