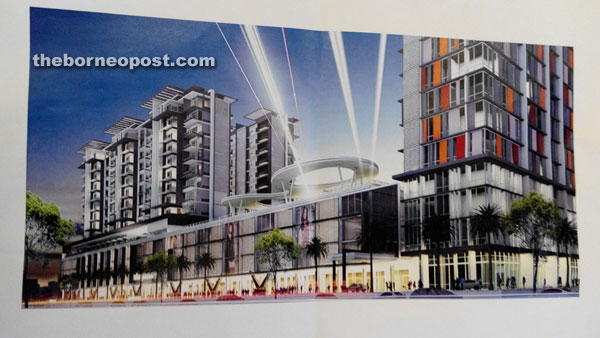 An artist’s impression of the complex.

MIRI: The Federation of Miri Division Chinese Associations Sarawak’s new complex will reflect the unity and solidarity of the Chinese community in the division.

Federation president Hii Teck Yun told thesundaypost that the RM200 million complex was set to be developed on a four-and-a half acres of land at Jalan Jee Foh here.

The development is set to change the façade of the area from a largely residential area into a modern living, business, leisure and recreational centre in line with Miri’s status as a resort city, said Teck Yun.

“The federation has Yang di-Pertua Negeri Tun Pehin Sri Abdul Taib Mahmud to thank for making our dream of having a complex come true. This is a result from a courtesy call on him by a delegation from the federation at the beginning of this year,” said Teck Yun.

Following the courtesy call, the federation was given the nod to develop the land together with an adjacent state land of two acres.

Earlier, the federation had received an approval letter from the Land and Survey Department for the project.

The letter was yesterday handed over to the federation advisor Datuk Hii King Chiong.

“We (federation) are very happy and very thankful to the state government particularly to Tun Pehin Sri Abdul Taib Mahmud and Chief Minister Tan Sri Datuk Amar Adenan Satem in making our vision and mission came true as we have been longing to have a complex for a long time,” Teck Yun  added.

“We have faced many challenges and obstacles in the past and will be committed and dedicated to make sure that the project will be a success. This complex will be our pride and joy to reflect the unity and solidarity of the Chinese community in the division,” he said, adding that the complex would be the biggest owned by a Chinese federation in the country.

As such, Teck Yun called on the Chinese community to be united and support the project to make it a success.

The federation is also thankful to King Chiong and his service centre for rendering help and assistance to the federation and the new committee in the last three years which led to the courtesy call on Taib.

Echoing Teck Yun, King Chiong reminded the Chinese community to be united and to work closely together for the betterment of the community and Miri in general.

“Let us discard and forget all the differences amongst us for the good of the community and Miri as a whole. We must work together as a team and be committed to ensure the success of the project,” said King Chiong.

He said the project will provide business and employment opportunities to the local community which will in turn stimulate the socio-economic development of Miri. It will also provide healthy competition within the community.

Among those present was federation deputy president Datuk David Goh.