Monday, August 10
You are at:Home»News»Sarawak»Borneo Law Reports launched after two years of editing 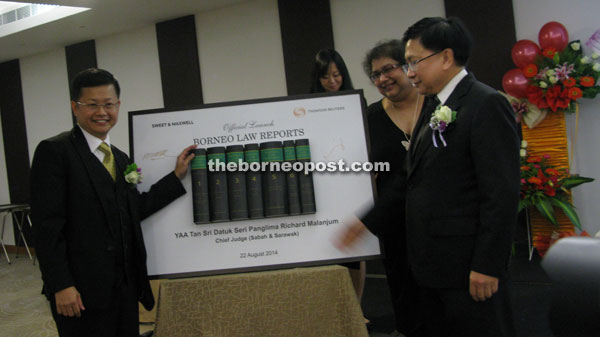 KUCHING: The remaining six volumes of Borneo Law Reports (BLR) were finally launched on Friday after two years of editing work, which contain key decisions emanating from actions filed in the High Court in Sabah and Sarawak.

The BLR is categorised into 53 subject matters, ranging alphabetically on all major areas of law with the total number of 662 cases reported selected from the few thousand judgments ranging from 1993 to 2013 forwarded to the editor Tan Kee Heng by Chief Judge Tan Sri Datuk Seri Panglima Richard Malanjum, with the cooperation of the High Court Judges and Judicial Commissioners in the High Court in both states.

“Volume One was launched on Dec 7, 2011. It took me two years to complete the remaining six volumes. In preparing this set of Borneo Law Reports, I only have one thing in mind, that is, I just want to make my little contribution to the legal fraternity in producing all these selected cases as reference for the advancement of the legal education and more importantly, for the due administration of justice in the courts of law through judicial precedents,” said Tan at the launching event.

Reuters publishing director Rachel Jaques were among those present.

In Tan’s highlight on some special features of this set of BLR, he said on Volume Two, on the subjects from Civil Procedure, Company Law, Constitutional Law to Contract, substantial number of Commentaries particularly on Civil Procedure were annotated in the cases reported in this volume.

“On Volume Three to Seven, many of the cases reported here have not been previously reported in any of the law journals in Malaysia and almost all the cases were annotated with Appeal Status whenever available and applicable,” he said.