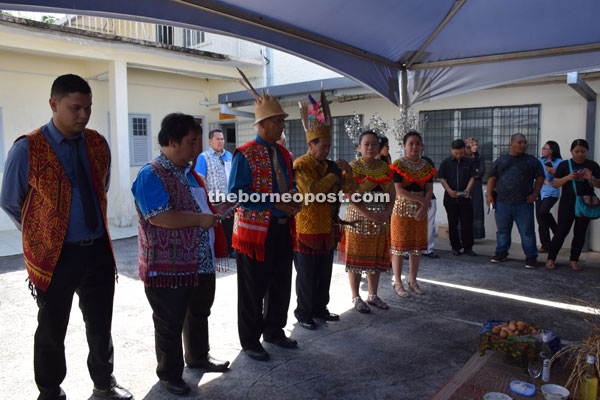 (From third left) Jimbun and Ajai during the miring ceremony.

KUCHING: Four skulls from the Brooke era, kept temporarily at Bangunan Abang Godam under the Sarawak Museum, have been returned to Fort Margherita following a miring ceremony.

Majlis Adat Istiadat research assistant Jimbun Tawai, 64, said the miring was held to pay respects to the skulls, which are believed to be those of fallen warriors who fought against the Brookes.

“The main purpose here is to appease the spirits and to show respect,” said Jimbun.

Originally housed in Fort Margherita, the skulls were moved to the museum in November 2012 during restoration work on the fort, which started in October 2012.

“Now we are moving them back to Fort Margherita, where they will hopefully remain peacefully for many years,” added Jimbun.

Ajai performs the berbiau chant with a rooster to sweep away bad omens.

Offerings such as glutinous rice, boiled and raw eggs, tobacco, and tuak were prepared and placed on saucers.

Ajai began by drinking a mixture of raw eggs and tuak as part of the ceremonial process for spiritual strength, which Jimbun explained was a symbol of bravery.

He then began traditional chanting known as berbiau during the miring, when a live rooster was used to symbolically sweep away bad omens.

Before placing them into a basket, Ajai tapped the skulls as an act of overpowering the spirits.

“According to old beliefs, the ceremony has to be performed in a proper way or you will slowly fall sick and die,” he explained.

Jimbun said the previous ceremony to transfer the skulls from Fort Margherita to the Sarawak Museum was more complicated.

Two sets of offerings were prepared — one was left at Fort Margherita while the other was placed along with the skulls at the museum as a provision for the spirits.

Jimbun explained that the offerings at Fort Margherita were for the spirits of the friends or relatives of the fallen warriors, who might visit and not find them there.

It is believed that leaving the offerings would prevent the spirits from wandering in search of their loved ones and disturbing the living.

The skulls are now safely back in Fort Margherita were they are housed in one of the towers.