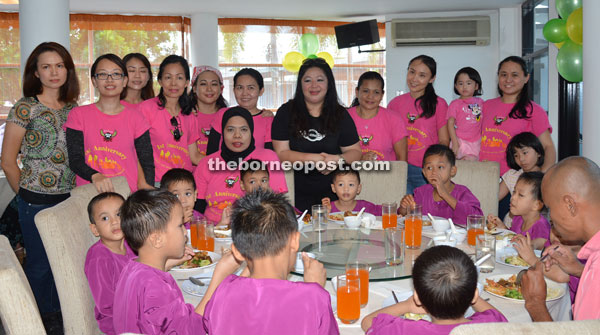 Elly (standing, fourth right) and other BLBMC members during the open house yesterday.

The event, which was held at The Banquet, was part of the group’s charity efforts this year that began

with a charity motorcycle ride from Hotel 56 to Sinar Serapi in March this year.

For the ride, all the members pledged to donate money to the Nur Murni Welfare House.

The remainder of the proceeds went to the open house event yesterday.

Seventy-nine children accompanied by 20 carers were feted to a scrumptious festive buffet.

The club, which was established last year, currently has 13 members and is led by its president Datin Elly Zalilah Mohd Yusof.

Among those present were Datin Zuraini Jabar, who is the wife of Assistant Minister of Housing Datuk Abdul Karim Rahman Hamzah and Juara Cahaya Sarawak director Dato Shahrizal Ishak.