Saturday, February 22
You are at:Home»News»Sarawak»Aviator lends balm to the fear of flying

WITH a MAS Boeing 777 disappearing in thin air on March 8 and another 777 of the same airlines hit by a missile over Ukraine’s air space on July 17, the muted fear of flying which air travelers silently nurture in their hearts seems to have grown more intense. 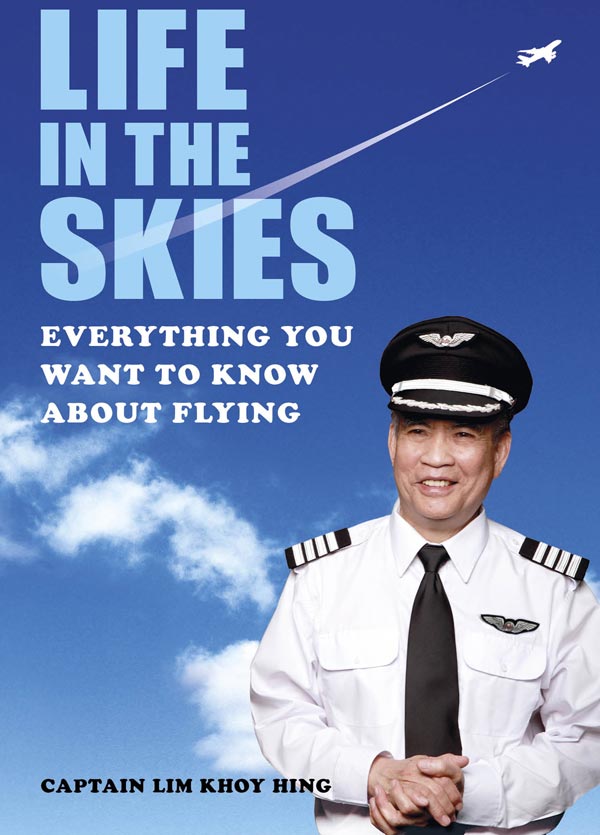 The cover of ‘Life in the Skies’ showing a smiling and confident Capt Lim who assures that flying is safe. — Photos from askcaptainlim.com

In the wake of these two air disasters happening within a four-month interval, frequent flyers have loads of questions:

Is it safe to fly anymore? How could a plane from Kuala Lumpur heading north-east to Beijing suddenly turn around south-west and be deemed lost in the unchartered waters of the southern depths of the Indian Ocean?

If MH17 flew the approved route from Amsterdam to Kuala Lumpur, how did it get hit by a missile when it was cruising way off the no-fly zone? In the first place, was there a properly demarcated “no-fly zone” in that part of the air corridor at that time? 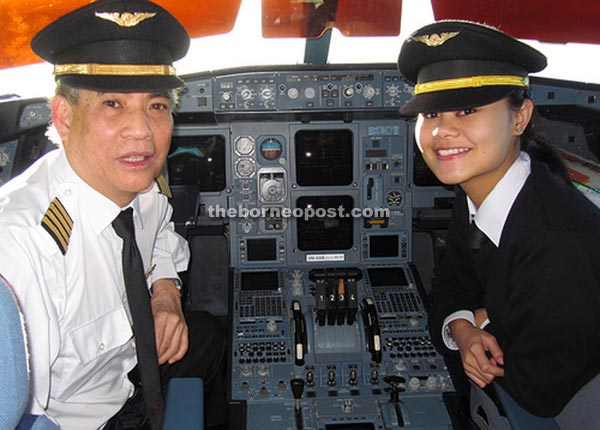 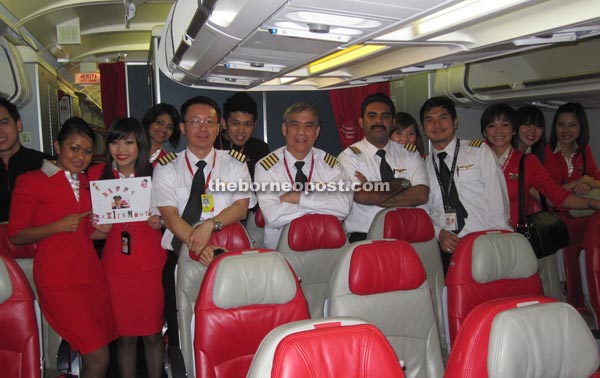 Capt Lim poses with his AirAsia crew in his last flight from London aboard Airbus A340 2011. 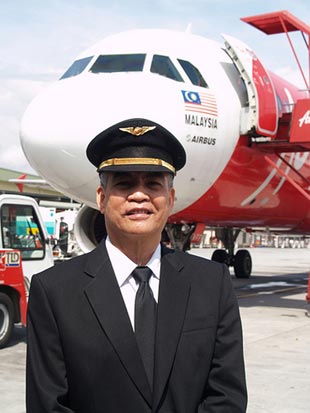 Was the missile that hit MH17 a poorly calculated trajectory or was the plane deliberately targeted by rogue Pro-Russian separatists? If there are rogue men on the ground, can there also be rogue pilots in the cockpit?

If you are scheduled to fly and if you are already feeling jittery about boarding your plane, it will be in good order to pick up “Life in the Skies” before you pick up your next boarding pass at the airport.

“Life in the Skies” authored by Captain Lim Khoy Hing may not have the answers to all your questions, nor answers to the questions outlined above, but it sure comes as a “balm to calm” your nerves and gives plenty of assurance that it is a lot safer to fly than to ride in a car.

Take it from Capt Lim who has logged 25,500 flying hours which equals 20 trips to the moon and back. In his book, Capt Lim says: “Compared to other modes of travel, flying is one of the safest means of getting from one place to another, as well as the fastest. More than three million people fly around the world every day without issues.”

Lending statistics, he asserts that in the US alone, fewer people have died in commercial plane accidents over the last 60 years than were killed in car crashes over an average three-month period. Attesting to safety of air travelling, Capt Lim assures frequent flyers that 115 people die every day in automobile accidents – that’s about one death every 13 minutes.

On road fatalities in Malaysia, he quotes the Malaysian Road Safety Department which reported that an average of 17 people are killed daily on Malaysian roads – adding up to a total of 6,205 people a year in a country of 29 million.

Philosophically, Capt Lim ponders on how safe is “safe”. According to him, “safe” is a relative term and explains it thus: “The safest airline in the world is one without planes or has planes that never fly.”

In his well researched book peppered with amusing anecdotes throughout the pages Capt Lim also quotes Wilbur Wright, one of two brothers who successfully invented the first airplane: “If you are looking for perfect safety, you will do well to sit on a fence and watch the birds.”

Capt Lim started his flying career in the Royal Malaysian Air Force, having been trained by the Royal Air Force in the United Kingdom. He served in the Air Force for twelve years before joining Malaysia Airlines.

In 2006 he joined low-cost carrier AirAsia, then its long-haul sister airline AirAsia X until 2011, when he retired at the age of 65. Capt Lim in his storied career as an airline pilot who was fortunate enough to fly the latest fly-by-wire planes such as the Boeing 777, and Airbus A320, A330 and A340, has encountered passengers who were afraid of flying and had listened to many queries about their fears of flying in general.

It would be a good idea to put these queries on record for posterity’s sake thought Capt Lim, and this is how his portal askcaptainlim.com came to be. Eventually enthusiastic fans of his portal lent the catalyst for him to put all his thoughts in a book and thus “Life in the Skies” was published by Marshall Cavendish Editions last year. Both, Capt Lim’s book and portal seem to be “just what the doctor ordered” to heal the tattered nerves of those suffering from aerophobia.

In a posting on July 19, a fearful air traveler remarks in askcaptainlim.com: “The recent missing Malaysian plane and the one that had just crashed on the Russian/Ukraine border obviously haven’t helped my fears of flying. The thought of everyone panicking on the plane including my family and knowing that we are all likely to die if something happens is horrible and sends my mind racing with fear and horrible thoughts.”

The fearful flyer who stated his name as Steve, says he is scheduled to fly to Orlando from Gatwick next summer, also said that he has only flown twice before when he was too young to be fearful of air travel and that he is not afraid of turbulence but the possibility of the plane crashing due to a terrorist incident or other causes.

In plain language Capt Lim responds (paraphrased): “Despite whatever you may read about air crashes, flying is still the safest form of transportation. I have flown more than 25,500 hours safely and I still believe it is very safe. Everything we do in life involves some degrees of risk – going to the supermarket, crossing the road, walking on an escalator, climbing up the staircase. Although there is some risk in flying, it is just one small risk. I always say that I feel safer flying than driving to work. So while flying is safer, it is not risk-free. As Captain Sully, the hero who saved 155 lives in the Hudson River crash said: ‘It is important not to define safety as the absence of accidents.’

Capt Lim also pointed out that MH17 is apparently not a case where some media has classified it as an “air crash” (this fact is to be confirmed by the black box). It seems that the plane was shot down, and technically, as far as I know, the plane was fine, added Capt Lim.

On another note, he tells Steve: “You should have control of your life and not let the environment have the upper hand over you. Think positively and believe that your plane is safe.”

Capt Lim writes with a deft light hand. In his book and in his askcaptainlim.com he covers wide ranging subjects on the many aspects of flying which will be of interest to air passengers.

Though retired, Capt Lim is still active in the airline industry. He is currently a simulator flight instructor for AirAsia and AirAsia X. He also trains airline pilots at the Asian Aviation Centre of Excellence. Capt Lim also contributes articles to in-flight magazine Travel 3Sixty.

Commenting on “Life in the Skies” AirAsia Group Chief Operating Officer, Bo Lingam says: “Although the statistics will tell you that air travel is one of the safest forms of transportation, what really comforts a traveller is not numbers on a page but relevant and accessible anecdotal explanations to any conceivable topic surrounding the flying experience. At AirAsia we declare ‘Now Everyone Can Fly’ but after Capt Lim’s ‘Life in the Skies’, now there are no more excuses for anyone not to fly.”

“Life in the Skies” is available on-line at airasiamegastore.com (http://tinyurl.com/nzt4jxr) and on board all AirAsia and AirAsia X flights. It is also available in all major bookstores in Malaysia and Singapore.