KUCHING: This city will witness the grandest organisation of boat races along Sarawak River this year. 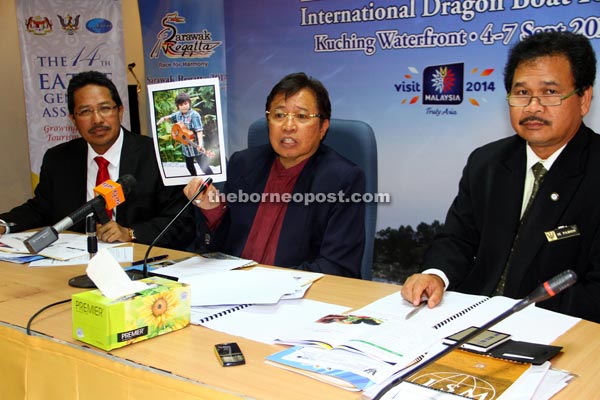 Abang Johari (centre) holding photo of popular Indonesian singer Tegar Septian, who will come down for the ‘Cultural Night’ at Sarawak Tourism Complex this Sept 5 in conjunction with Sarawak Regatta this year. – Photo by Chimon Upon.

“This year’s event will be different from those in previous years with the inclusion of the dragon boat competition,” he told a press conference held at his office in Wisma Baitulmakmur in Petra Jaya near here yesterday.

“This is the first year we are organising the Dragon Boat Regatta after last year’s Exhibition Race. It will be conducted under International Dragon Boat Federation (IDBF) Competition and Rules of Racing,” he said, adding that this would also be the first time for the dragon boat race – an event that normally takes place along the shoreline or lakes – to be held in a river.

From this line-up, 14 are international teams from Australia, Indonesia, Brunei, the Philippines, Singapore, Thailand, Hong Kong, Macau, Chinese Taipei and Canada; while the remaining six are from the state (two teams), Sabah, Perak, Penang and Putrajaya.

Participants will ply the 500-metre river route between Grand Magherita Hotel and Godown Amphitheatre, slugging it out to grab prizes totalling RM39,000 and medals.

The forum is an international organisation striving to contribute to peace and prosperity in East Asia through development of tourism and planning for regional progress through various joint and cooperative projects.

“Some 200 delegates from Malaysia, the Philippines, Korea, Laos, Vietnam, Cambodia, Mongolia, Thailand, China, Russia, Japan and Indonesia will be participating in the assembly,” he said.

Among the highlights would be the ‘EATOF Food Festival’, Abang Johari added, where seven chefs from the Philippines, Korea, Vietnam and Indonesia would showcase their national delicacies at Kuching Waterfront.

In addition, there will be a special appearance by Indonesia’s Tegar Septian, who is famous with his song ‘Aku Yang Dulu Bukanlah Yang Sekarang’ during the ‘Cultural Night’ at Sarawak Tourism Complex this Sept 5. Prior to this, there will be a ‘Meet The Fans’ session at Plaza Merdeka in the afternoon.

“We are promising a grander event as the Sultan of Brunei will be arriving on Sept 6, with His Highness and Head of State Tun Pehin Sri Abdul Taib Mahmud to witness the regatta on Sept 7,” Abang Johai said.

For next year, the minister said the organisers would work on a different format in creating more exciting races and organising the regatta for two weeks – one for Sarawak Regatta and the other for the Dragon Boat race.