Friday, January 22
You are at:Home»Features»Stingless bee honey – the Mother Medicine 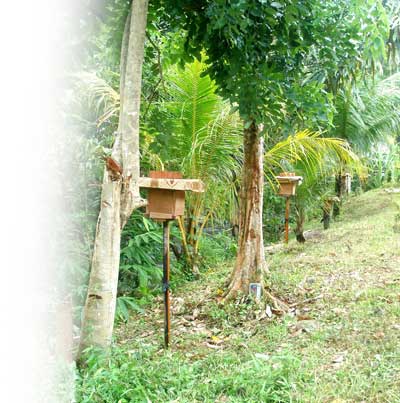 ALONG the 50-metre stretch of the riverbank at Kampung Senah Rayang, a number of small boxes are attached to a row of wooden poles.

Do you know what are inside the boxes? Bees, yes bees. What’s really special about these bees is they are stingless – and known as Trigona or Kelulut in Malaysia. They belong to the family apidae.

During my visit to the kampung for an official function, a swarm of these stingless bees (meliponines) could be seen buzzing inside the boxes and around a gong, hung at the side of the community hall. It was quite an amazing sight.

I wasn’t surprised by the bees’ black colour as I had seen this species before. What I didn’t know is they produce not only edible but also nutritious honey.

Stingless bee honey is twice as nutritious as ordinary honey, according to the Malaysian Agricultural Research and Development Institute (Mardi).

The other species of honeybees I know seem to like zipping and buzzing around with a great sense of urgency to accomplish their work, including to sting. As the saying goes, as busy as a bee.

However, the stingless bees don’t whizz around so much, seemingly much more relaxed, and somehow will not make you feel as tense with their lack of sting during an encounter.

They are much smaller – about three to five millimetres in size, and have a slimmer body in total variance with the usual yellow and black sting-capable honeybees. Although they do not sting, Trigona can be aggressive too, especially when threatened.

My experience with this species is they attack the soft part of your skin like eyelids, lips, face and neck. They also tangle in your hair even although they don’t sting.

They have stingers but these are highly reduced and cannot be used for defence. 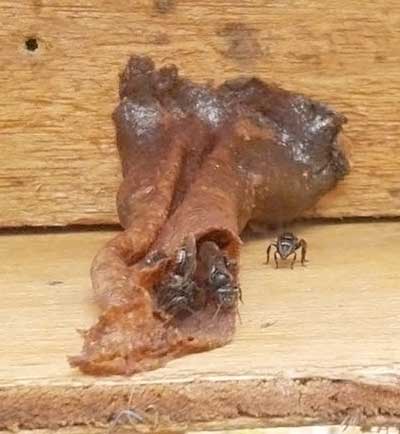 The exit and entry points of a stingless bee box.

Until my visit to Kampung Senah Rayang in upper Padawan, about 90km from Kuching, I always regarded these stingless bees as worthless social insects.

But according to kampung headman Roslee Abdullah, Trigona honey is known for its medicinal values.

He said the villagers had tried rearing these stingless bees on recommendation by Mardi. A two-day course on this venture was held at the village in May with 60 participants.

Roslee added that after the course, the village security and development committee (AJKKK) started a pilot project with eight bee boxes along the riverbank. Some families also tried it with several boxes around their houses.

Roslee said the boxes were placed near coconut trees since meliponines are good pollinators of coconuts.

“In fact, the bees are farmer-friendly because they pollinate fruit trees and vegetables.”

He revealed the villagers had been collecting stingless bee honey from the wild but did not know its nutritional values.

“In the past, the honey was collected for consumption only,” he added.

A villager Johari Mohd Jeprydin said the stingless bees are not dangerous to children and are fascinating to watch.

“Look, there are many of them around the gong and they are not bothered by the kids walking by.”

It is believed there are about 15 species of stingless bees. They have a queen, drones and many sterile workers – just like colonies of commercial honeybees. 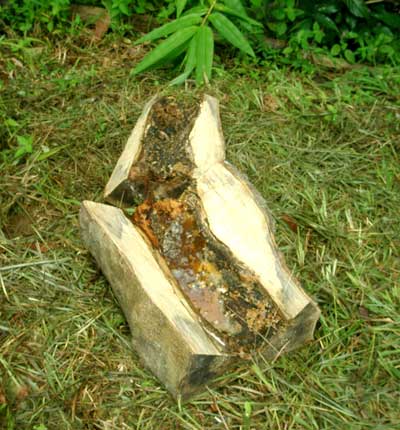 The inside of a tree where the stingless bee queens are extracted.

Lure of the queens

Johari said to attract armies of sterile workers, the queens which live in hollow trees found in the wild or near the village, had to be brought to the boxes.

The size of a colony in a hollow tree can range from a few dozens to over 100,000. The bees store pollen and honey in large egg-shaped pots made of beeswax, mixed typically with various types of plant resin (sometimes called propolis).

These pots are often arranged around a central set of horizontal brood combs where the larval bees are housed.

When emerging from their cells, the young worker bees tend to remain inside the hive, performing different jobs. As the workers age, they become guards or foragers.

Unlike honeybee larvae, meliponine larvae are not fed directly. The pollen and nectar are placed in a cell, an egg is laid and the cell sealed until the adult bee emerges after pupation.

Johari said they were told a hive of stingless bees reared in a box produced about 700 grammes of honey, adding that these bees produced a delicious tangy honey, sweet and sour.

“I have tried it before,” he added.

“But when you rear these bees, make sure there are fruit trees around them because their colonies rely entirely on flower nectar and pollen for food.”

Researchers have also discovered stingless bees are important pollinators of many forests and native plants, crops and garden flowers in their search for nectar and pollen.

For centuries honey is known to be the enemy of diseases. Stingless bee honey is called Mother Medicine and there are an increasing number of traditional practitioners and researchers suggesting its use.

Honey is also restorative after an illness and said to sooth pain, act as antiseptic, hasten healing, relieve cough and be effective in curing burns, carbuncle, boils and diabetic wounds.

Stingless bee honey certainly has a lot of nutrients because meliponine is smaller than the normal bee and can suck nectar from flowers to the deepest space. As a result, the honey collected contains many vitamins and minerals, among which is propolis, produced from the bee’s saliva mixed with its food such as pollen, bark, tree shoots and flowers.

Propolis is considered beneficial to heatlh because it contains all 16 amino acids, glucose, vitamins A, B, C, D and E, bioflavonoids and minerals.

Bioflavanid repairs and improves the systems of the human body and livestock. 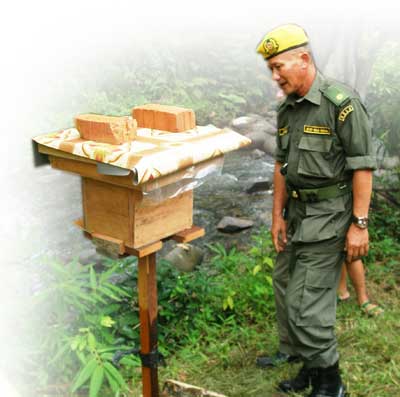 Johari explains the functions of the wooden box for rearing stingless bees.

Nowadays, many people are fond of honey and some have even bought fake honey. This is because technology today is so advanced that it can help formulate honey identical to the original product.

So rearing your own honey bees is an option to obtain real honey. If you are afraid of being stung, then rear the stingless bees.

The Bumiputera Entrepreneurs Development Unit (Bedu) in the Chief Minister’s Department and Mardi are taking steps to promote and commercialise stingless bee honey.

Assistant Minister in the Chief Minister’s Department (Entrepreneur Development) Datuk Naroden Majais said in May Malaysia spent RM26.7 million on imported honey in 2008 and this increased to RM40.8 million in 2011 and RM50 million last year.

He added that based on last year’s statistics, only 730 entrepreneurs nationwide had ventured into honey production.

Naroden noted that stingless bees rearing could become an important cottage industry for the people to earn extra income.

Each colony could produce up to 2kg of honey a month, he said, adding that the honey could fetch RM120 per kg in peninsular Malaysia.

Based on Mardi’s research, there are 35 species of stingless bees in the peninsula while more can be found in Sarawak.

Mardi is popularising the breeding of stingless bees. Meliponine honey in the form of medicinal honey contains natural antibiotic elements and functions as an anti-oxidant, anti-bacterial and anti-toxic agent. It also dilates blood vessels, strengthens the immune system and activates cells.