Monday, January 30
You are at:Home»Features»Subtle splendour of Saigon
For the freshest news, join The Borneo Post's Telegram Channel and The Borneo Post on Newswav. 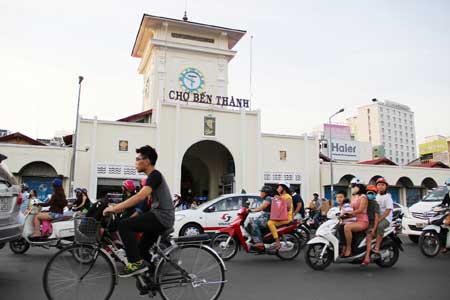 Motorists and cyclists passing one of the entrances to the Ben Thanh Market.

BY sight alone, Ho Chi Minh City (HCMC) is no different than any urban centres across the fast-developing Greater Mekong region.

The thriving city – formerly called Saigon and used to be the capital of South Vietnam before the Reunification with the North in the mid-70’s – is home to 10 million people and a manufacturing hub for many multi-nationals.

Still not many find the city the ideal vacation spot.

Upon my return to Kuching, a friend asked: “What event were you’re going for there?”

“Why?” he retorted with a perplexed look. 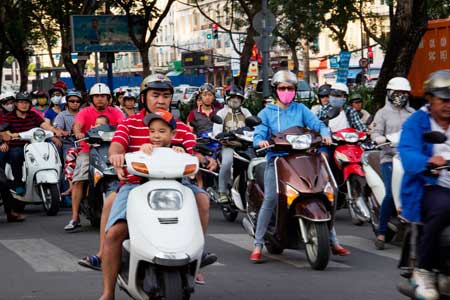 The sea of motorbikes at a junction near the market.

His reaction, however, did make me question: What makes HCMC different?

With rapid development and massive population come that downside anyone could see in metropolises across Asean – unbearable traffic jams.

In this respect, though, HCMC has its own uniqueness. Go to any junctions in the city and one can witness a sea of motorcycles, covering the lanes whenever the traffic light turns red.

Not exactly a surprising sight, considering the number of the two-wheel vehicles in the city alone has reached five million – about 14 per cent of the total 37 million in Vietnam, according to statistics from its Transportation Ministry.

“It’s really easy to get a motorbike, especially a scooter, here,” said a local tourist guide who introduced himself as Ken.

“With only US$1,000 (RM3,170), you can get five bikes. Obtaining a licence is also quite easy. Many tourists buy scooters during their stay here and later sell them before leaving.

“Done right, it can be a very viable venture.”

Jokingly, Ken also said owning a scooter could score a single guy some points with the ladies.

“One motorbike means one pillion – preferably a beautiful Vietnamese girl. I have three scooters,” he grinned.­

Possible danger aside, I found crossing the scooter-swarmed streets of HCMC quite an adventure. I learned – rather frustratingly – that waiting for the traffic to subside would definitely get you nowhere.

In this case, the saying do what the locals do certainly applies. Be as careful as you must but do not appear hesitant when weaving your way through the insane flow of motorcycles. Fortunately for tourists, most bikers would give way to pedestrians, honking to announce their presence beforehand. 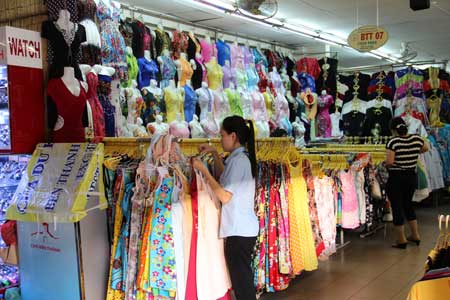 A vendor arranging clothes at one of the shops inside Ben Thanh shopping complex.

Shop till you drop

Still, conquering the streets in HCMC is not exactly a solid selling point that Vietnam can put on its promotional tourism brochures. Shopping, on the other hand, is definitely a yes. In this respect, the city has Ben Thanh Market to be proud of.

Located in the very middle of District 1, this tourist magnet was built in 1870 by the French and initially – and appropriately – called Les Halles Centrales (Central Halls in French) before being renamed in 1912.

With a humble beginning as a wet market, the place has now become the oldest and the largest of its kind in Vietnam, having survived many ups and downs throughout its almost 200-year history.

Here, shoppers are spoilt for choice. The variety of trades in the complex ranges from the usual grocery items like meats and vegetables, food and beverage, to garments and accessories, souvenir items, as well as household and hardware products.

I must say the place feels right at home for Malaysians. Everywhere I went, the vendors would greet:

“Mari abang, masuk tengok barang. Saiz abang ada (Come in sir, have a look. We have the size for you).”

At first, it was amusing but over time, it became a bit annoying, especially when some of them were very insistent.

Nonetheless, the Vietnamese are generally gentle people and there are many courteous traders who welcome tourists with that renowned Asian hospitality.

Make no mistake, though. They are still businesspeople and as buyers, you must polish up your bargaining skills.

While the pricing is considerably less than those in Bangkok’s Chatuchak and Patpong, Jakarta’s Tanah Abang, Bandung’s Kedei Babe, Manila’s Quaipo or even Kuala Lumpur’s Petaling Street and Chow Kit, having the finesse in getting the best deal in Ben Thanh Market would warrant a second – possibly a third – packed luggage on your flight home. 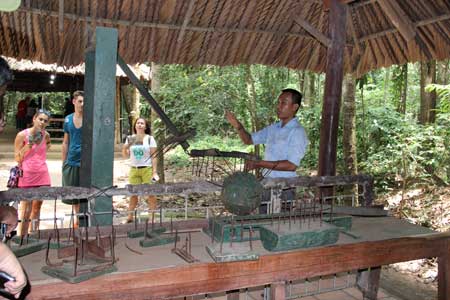 Ken explaining to tourists the different kinds of traps used by the Vietnamese during the Resistance.

The energy needed to hunt for the best bargains while shopping at Ben Thanh Market or Saigon Square certainly requires some “refuelling.” In this regard, the city does not disappoint.

Ranging from gourmet offerings in posh restaurants, snacks at homegrown bistros or local fares along the streets, you can take your pick according to your preference and, of course, your wallet.

My choice would be the street food – cheap, readily available day or night and most importantly, tasty.

However, one could not be more wrong in assuming these simple dishes belong in the low-class bracket. Take baguettes, for example. The wonderfully crusty and chewy loaves usually conjure up the image of patrons sipping café lattes and accompanying their slices with raspberry confít or marmalade at fashionable cafés in Paris.

In HCMC as well as other cities across Vietnam, the scene is more exotic. Hawkers fill their homemade baguettes with sautéed onions and the meat of customer’s choice, then layer them up with sliced cucumbers, basil leaves, bean sprouts and tomatoes before finishing the orders with generous splashes of soy sauce, fish sauce and – depending on how fiery diners want them – hot chilli sauce.

No butter, no mayonnaise, no lettuce!

For Muslim travellers, there is no issue as there are many halal restaurants, mostly operated by Malaysians or Indonesians, dotting District 1 and 3. 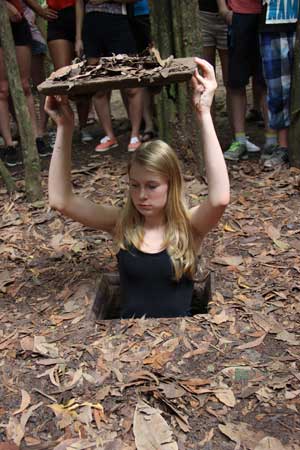 A young visitor from the Netherlands trying her way into one of many tunnels at Chu Chi.

Having spent the first two days of my weekend stay in HCMC on food and shopping – all while skilfully navigating through the busy traffic – I decided to find out more about Vietnam.

Coincidentally, the receptionist at the hotel recommended a half-day tour to the Chu Chi Tunnels – at just 300,000 Vietnamese dong (around RM45).

The vestige of the Vietnamese resistance against the French and Americans between the late 40’s and early 70’s, the elaborate underground network spans some 250km underneath the villages of Tan-Phu-Trung and Phuoc-Vinh-An in the northwest of HCMC.

Simply put, it was a subterranean community with shelters, storage areas, including for weapons, medical quarters, cooking sections and even schools for children of the resistance.

The ‘three-scooter guy’ Ken was our guide, taking us through the remnants of the war-torn era.

Having watched so many Hollywood Nam movies, I must say I find most of the silver screen versions a bit romanticised. This is especially so when Ken brought us to the traps section of the memorial park.

“In the movies, you mostly see deaths of American soldiers by shooting. (This is) not entirely true. See these traps? They’re meant as means of torture that didn’t necessarily result in death,” he said, pointing at a contraption installed on a vertically rotating door that had spikes on each end of both sides.

The positioning of the spikes simply made me cringe. Ever the comedian, Ken quipped: “Bust on one of these doors, and you’ll bust something you’ll never get back. Fate worse than death, huh?” Chilling!

As a tourist, it was an insightful experience but one must not forget this site also serves as a reminder of the dark times that once befell the country – at least 45,000 Vietnamese men, women and children are said to have died defending the tunnels over the course of the war. 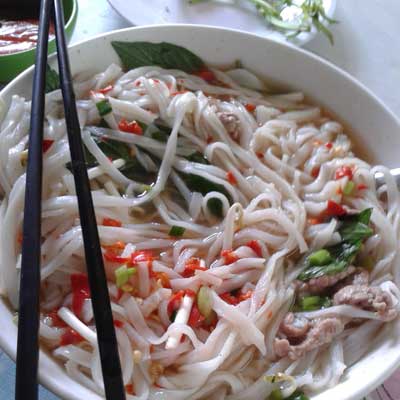 A bowl of ‘pho bo’, or Beef Noodle Soup – a favourite hawker’s fare among Vietnamese and foreigners alike.

So there you go, I managed to get adventure, retail therapy, culinary experience and hands-on history lesson all rolled into three very fulfilling days.

It may seem like a shortcoming (pardon the pun) but HCMC is really one of those cities you would appreciate more during short visits rather than the long stays.

Again, funny guy Ken gave a rather apt, albeit a bit sexist, view on this: “Look at this city as a woman. Stay with her long enough and it’ll be like a boring marriage. But see her as a mistress and you’ll enjoy the pleasures in every visit.”

Not exactly poetic, but I’ll take it anyway. 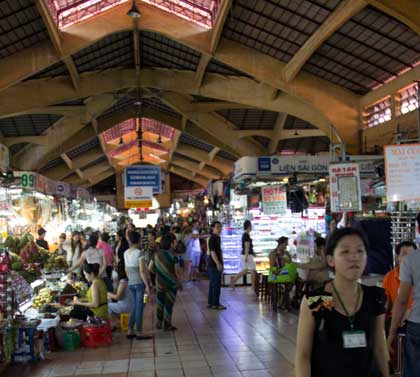 Shoppers and traders inside Ben Thanh Market, which was built in 1870 by the French.