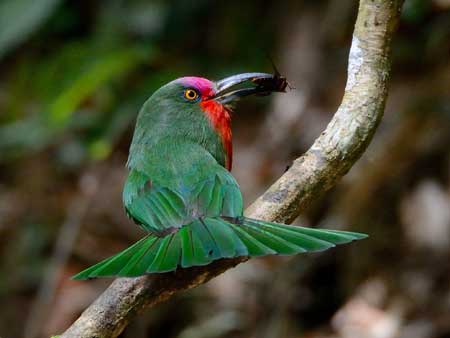 WITH a descending “ka-ka-ka-ka” call, the green bird sat on its perch, waiting for its mate. “Ka-ka-ka-ka,” came the reply from above. The birds were taking turns to feed their young.

The male swooped down into its nest in the ground and within a few seconds out it came. It perched on the same branch. Then came the female’s turn. She entered the nest and came out again. With a final “ka-ka-ka-ka” the pair flew off.

Bee-eaters are members of the Meropidae family, of which there are 26 species worldwide. Of these only three are found in Borneo — one of which is the Red-bearded Bee-eater (Nyctyornis amictus), which is a locally common resident of primary and old secondary forests in Borneo’s lowland forests. It ranges from Borneo to Sumatra through the Malay peninsula and into Myanmar.

Red-bearded Bee-eaters are called this because of their vermilion throat feathers, which look like a beard when they are puffed out.

Unlike the elegant looking Blue-throated Bee-eaters, the Red-bearded are more robust in appearance. They grow to a size of 27 to 31 centimetres.

The male has a pinkish lilac forehead and crown with a narrow fringe of blue feathers at the base of the bill and around the eyes. Their lores (spot between the eye and start of the beak), chin and throat are red.

The female’s forehead is vermilion and forecrown lilac. The bill is dark and curves downwards at the tip. As it calls, the bird stretches forward, puffs its long throat feathers out, and bobs its head up and down with each note. It may also jump a few steps sideways along the perch, then turn around to face the other way. When making the rattling call, it wags its tail backwards and forwards.

Red-bearded Bee-eaters hunt for food alone or with mates, chasing after insects from a perch. They eat a variety of invertebrates in flight, preying not just on bees but also beetles, wasps and ants. They rest quietly hidden on a chosen branch, waiting for their prey to come within range, and then fly fast with great agility to capture it.

Unlike most bee-eaters, the Red-bearded are not colonial breeders and nest either solitarily or in pairs. They build their nests on perpendicular earth banks or road cuttings. The nest burrow is about 1.2 metres long and while many may be excavated, only one is actually used. Both the male and female guard the nest.

I have seen the Red-bearded Bee-eater chasing off a shrew that invaded the nesting area and the fight went on for a couple of minutes with the shrew running off into the forest. It was amazing! No matter how many times you see these birds, they can still make a day special and cause excitement.

For more information about Red-bearded Bee-eaters or other birds of Sarawak read ‘Phillipps’ Field Guide to the Birds of Borneo’ by Quentin Phillipps and Karan Phillipps. 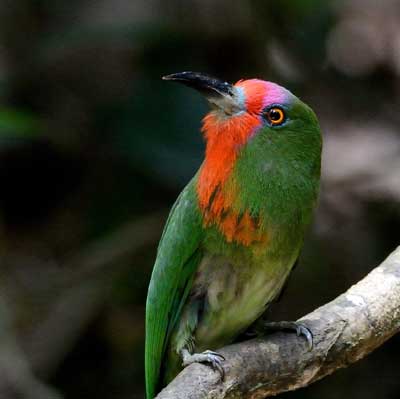 The female Red-bearded Bee-eater’s forehead is vermilion and forecrown lilac.

The Malaysian Nature Society
Established in 1940, the Malaysian Nature Society is the oldest scientific and non-governmental organisation in Malaysia. Our mission is to promote the study, appreciation conservation and protection of Malaysia’s nature heritage. Our 5,000-strong membership, spread across 12 branches nationwide, come from all walks of life, bound by a comment interest in nature. For further information on membership or our activities in Kuching contact us at mnskuchinggmail.com. For information on our activities in Miri contact Musa Musbah ([email protected]). You can also visit www.mns.org.my, http://[email protected] or www.facebook.com/mnskb.

Previous ArticleHelp! someone blocked access to my house
Next Article Subtle splendour of Saigon