Monday, August 3
You are at:Home»News»Sabah»No need for outsiders to teach us our history, rights – Pairin 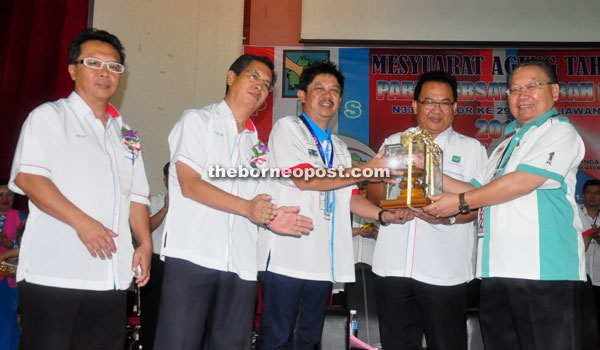 KENINGAU: Parti Bersatu Sabah (PBS) president Tan Sri Joseph Pairin Kitingan said there is no need for ‘outsiders’ to come and teach the people in the state about our history and rights.

“The opposition leaders from Peninsula need not come here to teach us about history and our rights,” he told reporters after opening the PBS Bingkor and Liawan Division annual general meeting (AGM) here on Saturday.

He stressed that leaders in this state are known to talk, organize and carry out matters of native people by using logical wisdom with the aim of improving the situation.

Pairin therefore said there is no need for DAP and its leader, Lim Kit Siang, to come to this area because the people here and this state are mature enough to overcome any problem arising through discussion.

“We are well aware of the extent of the problems here and the people and leaders can sit down to talk.

“But if only imitate the way of life, especially the customs of the native people, it can be seen as serving a political purpose,” he said when asked to comment on the creation of replica oath stones by opposition leaders during the Independence Day celebrations here on August 31.

Pairin said it was not surprising that the opposition had to think of something to remind the people. This could be through imitation of what our ancestors and past leaders had done to create an atmosphere as evoked by the memorial Oath Stone.

“I have not read what they have written in the oath stone that they created but what is in our history is enough to remind us why Malaysia has been formed and what has been done, not fulfilled and so on.

“Of course, we feel strongly that certain things that have been promised and discussed should always be fulfilled by the government, and we are prepared to go on talking on this.

“There are some who say that it is no longer relevant as what has happened in the past is now irrelevant. This is not true. History serves as a guide for us on what has happened. So it must be relevant. Like our age, our birthday which is always relevant,” he said.

However, in fighting for what is due to us, it must not undermine public order, peace, economy and the relationship with one another.

“I want to say that when discussing for our rights and privileges, we must be wise, think correctly in a sane and sincere manner and not just politically agitate or incite the people,” he said.

On the current wave of incitement in the social media, especially Facebook, calling for the secession of Sabah and Sarawak from Malaysia, Pairin, who is also Deputy Chief Minister, said the country has a constitution that has been agreed by the former leaders that there should be no secession.

He said from a legal standpoint it is not possible to secede as it would be contrary to the constitution of this country despite the misgivings of the people here.

“I do not follow what has been written in the Facebook. In the newspapers, a woman from Sarawak has given a strong view on the matter that she was just highlighting and not inciting.

“So, if you explain it within the legal framework on what secession entails, under what circumstances and in what situation it can come about or not, all these can be discussed in a proper manner.”

On the statement by PBS secretary general Datuk Johnny Mositun that the government should bring back the Internal Security Act (ISA), Pairin said the ISA was already abolished following demand from the people as it was seen to be infringing on our democratic rights.

However, he said in the present situation many questions were raised on the abolition. Some wanted the ISA returned, some not, some were neutral, moderate and quiet.

“Specifically in this case, what was raised by the PBS secretary general was his own personal view and not that of the party. The party has not discussed it nor issued any statements on the ISA,” Pairin stressed.