Wednesday, May 19
You are at:Home»News»Sabah»Student and woman killed, three others badly hurt

KOTA MARUDU: A teenage student and a woman were killed while three others were seriously injured in road accidents in Kota Marudu and Beluran yesterday and Thursday. 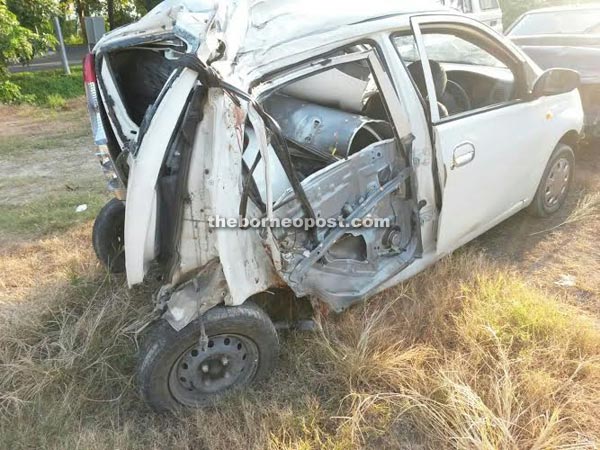 The Kancil car being towed from the accident scene at Beluran-Telupid bypass. 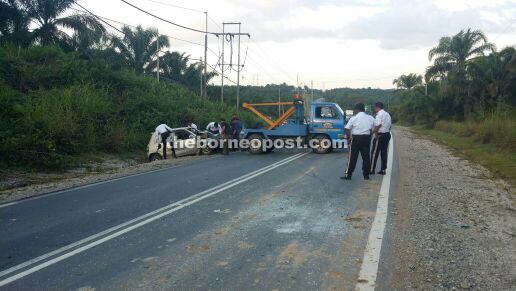 The Kancil car being towed from the accident scene at Beluran-Telupid bypass.

The secondary one student from Sekolah Menengah Kebangsaan Kota Marudu was killed in a road accident while his friend sustained serious injuries after the Perodua Viva they and two others were travelling in rammed into an electrical sub-station along Jalan Marak Parak in Kampung Tangkol here yesterday.

Shukri Syariat, 13, was pronounced dead at the district hospital due to severe head injuries while his friend, identified as Alexradlan Safie, 14, a form two student from the same school, was seriously injured in the 10am incident.

It is understood that both victims were seated at the back seat of the car that was driven by a friend and heading to Kampung Sorinsim from Taman TG3.

District police chief Superintendent Mohd Isa Yusuf said initial police investigation believed the driver had lost control of the steering wheel when he tried to avoid knocking a student from the same school.

“This caused the driver to lose control of the car and rammed into the electrical sub-station by the road side.

“The driver and the front passenger however escaped with only minor injuries,” he said yesterday.

Mohd Isa urged eyewitness to come forward to assist police in their investigation of the case under Section 41 (1) of the Road Transport Act 1987.

In BELURAN, a woman died while two other persons sustained serious injuries when the Perodua Kancil car they were travelling in collided with another vehicle at Km 39, Beluran-Telupid Bypass here on Thursday.

The driver, Philip Ampong @ Robin, 52, suffered serious left hand and face injuries while another passenger Sulumia Sulumon, 46, was injured in the head in the 4.30pm accident.

“It was learnt that their vehicle was heading to Telupid from Sandakan when it hit the rear of a vehicle in front of them.

“The vehicle did not stop but left the scene,” he said.

The case will be investigated under Section 41 (1) of the Road Transport Act 1987.