Saturday, February 22
You are at:Home»Features»A Jewel of Bario 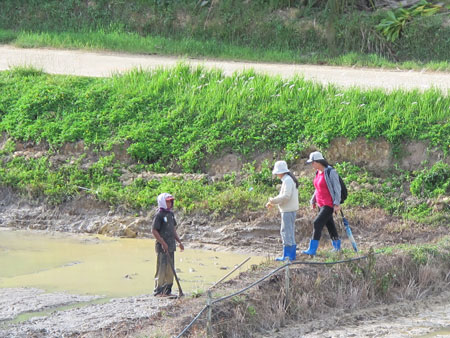 MY Foochow friend and I were unable to book rooms in Bario by phone due to a miscommunication. Fortunately, a kind friend suggested a homestay belonging to her sister-in-law’s family.

And during our stay, we met a really special lady of the highlands which left a remarkable indelible imprint in our minds. In just two days she showed us the importance of being a true woman of value.

We arrived in Bario by Twin Otter, and, to our surprise, there were several familiar faces from Miri. Soon, we were whisked off by a mud-caked and tattooed Toyota Hilux, the normal local mode of transport.

We thought it would be a half-hour ride to the homestay – instead it took only three minutes, costing each one of us RM20.

The driver picked up RM120 for that single trip from the airport.

“Transport in Bario is the most expensive in the whole of Borneo. However, if you can and like, you can go almost everywhere on foot,” a Bario school teacher said.

The Ngimat Ayu Homestay is RM100 per night per person. There are five rooms with either a Queen bed or two single beds.

Water is available 24/7 but electricity is on only at night for a short four to five hours. So it’s more convenient to bring along your own power bank.

Bario – although promised electricity by the government – still has to wait. One could see all sorts of development from the sky as we flew in but the mini-hydro project did not seem to be ready even after several years.

Sina Bued Aren is a very small, fair lady. Her skin is thinned by age but her eyes still twinkle, and we knew from our first handshake, we had found a loving Sina or aunt, without her saying much. 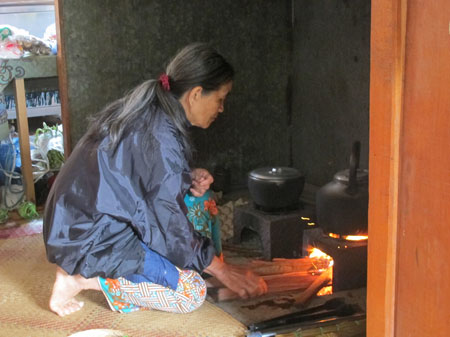 Although she has gas for cooking, Sina still starts a fire with wood to boil water for the day and always keeps her fire going as soon as she gets up at the crack of dawn.

He was to become the paramount chief of the Kelabits from 1998 to 2005. It was a marriage arranged by relatives. Gerawat Aren paid a huge dowry for this “noble woman.”

Kerayan can be reached by walking across the border from Bario, and in 1955, it was quite common for the Kelabits to walk from Sarawak and Kalimantan and back.

But it was uncommon for a Bario man to marry a young “noble woman” from Kalimantan.

To Martha Padan, the marriage at a young age was “law” from her parents. She would have loved to have gone to school to learn to read and write. But she was obedient and considered her marriage to this young handsome man a kind of education. And she was very right about that.

Her strong values enabled her to be a Biblical Proverb 31 wife – obedience was the value which helped her maintain a sustainable and successful marriage.

She learned about home and village hygiene from her husband who was then the first medical assistant with full government training in Bario.

She was by his side many times when he did simple surgery and stitching, including extracting teeth and delivering babies.

She was in total support of her husband who was credited with raising of awareness of cleanliness in their village.

She has always boiled drinking water for the family from the day she got married. And today, we can still enjoy her boiled water in the patio.

When her husband passed away in 2013, she said in her shy and quiet way “a huge part of my life has gone away.”

She has always held her husband’s community at heart.

As a Lady of Bario, she opened her doors and her kitchen was always full of people, coming and going during her husband’s official term, and after he died, she continued to welcome friends to her home.

Today, it’s slightly different because her son operates the homestay. But to her, it’s not at all different. She will still cook her originals for tourists and friends who come to stay while her son does his part of modern cooking like barbequing or stir frying – culinary arts he learned from the “outside world.”

True traditional food from her kuali is just so natural and delicious.

She is a good hostess because since her marriage in 1955, she has to welcome visitors, sometimes even in the middle of the night. Her role has always been to put cooked food on the table and boil water in the early hours of the morning.

She has in a way to keep the hearth warm and make her visitors feel welcome. 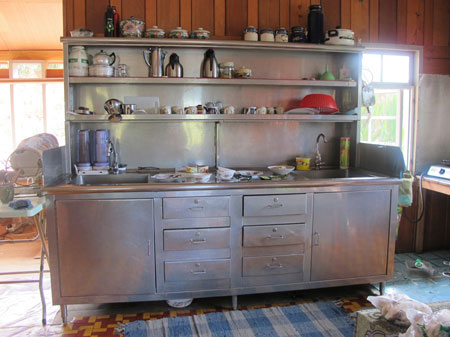 This is the beautiful stainless steel kitchen cabinet the family sent by air from Miri to Bario for Sina.

One of the best moments to interact with her while we were there was to get up before the crack of dawn and sit with her – with our toes extended out towards the traditional Kelabit fire place.

She speaks no English and very little Bahasa and my friend and I could not really converse with her. But we got on like a house on fire.

By early morning, Busad, a female friend, came with the delivery of jungle vegetables like meedin, tepus, and lanau, Bario ajinomoto leaves, bunga kantan, daunubi, terong burung pipit, and, of course, Bario pineapples and other herbs.

Soon, we were interacting with her and enthusiastically learning how to prepare lunch. We were glad her English speaking daughter Ann was staying for a few days and we had a lot of translation going on in the kitchen.

But because she has a genuine interest in sharing her knowledge with us, and even how to prepare Kelabit vegetables before the cooking, we were automatically accepted by her as her assistant cooks!

That was really something very significant especially for Yong Gien Huong, a Chinese writer specialising on herbs and medicinal plants of Asia. 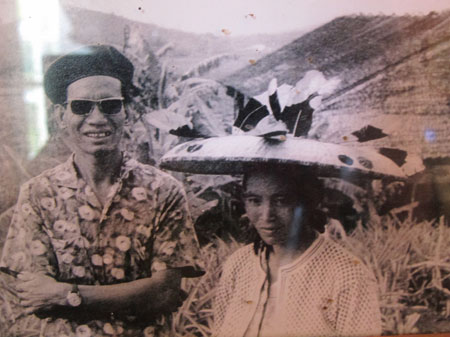 A shy, young wife with her husband Ngimat Ayu, a government servant.

Early in the morning of our second day, I woke up to listen to the rain. The fire place had not be lit and I was smiling to myself: “Maybe Sina is having a lie-in today, since it’s raining.”

Normally in a new place, I would wake up to see the sunrise. I was not put off even though Bario was experiencing very low mist and a bit of haze.

So the sun had not been “rising above the mountains like before,” according to a knowledgeable man in Bario.

He said: “Only on a very clear day with no mist expected can you see the sunrise. You may have to come another time to see it.”

While groping around in the dark, I heard a noise coming up the stairs. Luckily, I could recognise it as human steps and I was not afraid at all.

Then, suddenly in front of me was Sina, stretching her hands out to catch me and say good morning. She was happy to see another human so early in the morning in the dark!

Soon she took me to the kitchen and started the fire. I notice she was dressed up in layers of clothes and her hair was all wet from the dew. Her socks were soaked too.

She explained she had been out checking her padi field. The rain in the night had raised the water level so that her workers could plough the field and get it ready for sowing. She must plant her rice this year, having meticulously selected the seeds.

I love the way she speaks to people – and even to a Foochow Amoi from Sibu. She held my friend’s hands when she explained things in the little Bahasa Malaysia she knows.

When speaking to Yong Gien Huong, she did the same. It seems, somehow, knowledge could be transmitted by holding hands! 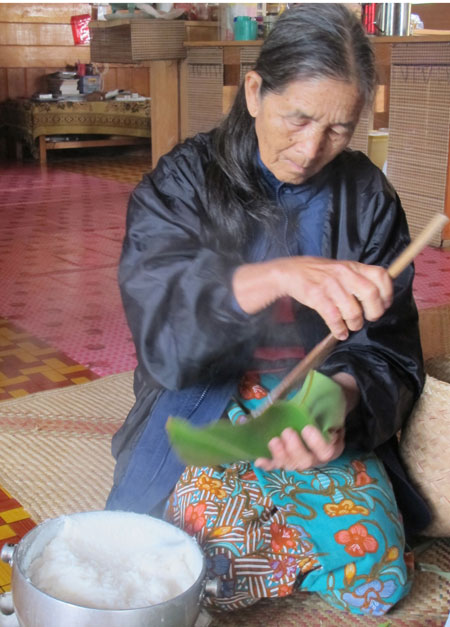 Showing how to wrap soft rice with daun long in preparing nubaLaya.

On that special second day of our stay, she agreed Busad should take us by motor bike to the riverside to forage for vegetables – and it was really a fantastic arrangement money could not buy.

We couldn’t hire the local famous tour guide as we did not make an earlier booking. Apparently, the local tour guide is very popular and he has to be booked before even the tourists arrive. He charges RM100 a day.

There is no half-day tour. So those not up to it physically and cannot last a whole day, may not benefit from his expertise.

Busad, who is married to a Penan, was enthusiastic and she took turns taking the two of us to the edge of Bario on her motorbike. We then walked to the riverside.

It was an experience looking for tepus, kenayit and fresh bamboo shoots. After only about one hour, we returned to the homestay. Busad gave everything we collected to Sina as gifts.

Busad forages for wild vegetables and sells them. She and Sina have a great love for the environment and together, share common knowledge of planting rice, cultivating vegetables around the house and foraging for food in the jungle. Life cannot be more environment-friendly than theirs.

Having meals with Sina in the kitchen was a pleasure. We would learn to cook things like Bario’s Kelabit porridge from her – and take things for her to the kuali.

In total silence, we would move together – two from Foochow background and two from Kelabit background.

Learners and teacher moved in unison. At times when I was not doing the right thing, she would quietly smile and pick up the vegetables and teach me the right way to cut or peel.

“Mother said the taste of the vegetable will be different if you cut it wrongly,” Ann said.

And when extra guests arrived, Sina would eat her “cereals” so that they could have the vegetables and meat.

She didn’t eat much meat when we were there – happy with the leftovers which we also enjoyed with her, leaving more of the city food – fried chicken, curry chicken – for the foreign tourists.

In the Bario Highlands, there is hardly any need to use refrigerators. All foods keep well in the cold nights.

We were happy with the free flow of Nescafe and Instant Tea put at the patio of the homestay. Sina’s water boiled in the early morning was kept hot in made in Fuzhou flasks.

Apparently, the paramount chief of the Kelabits once bought half a dozen of these flasks from Sibu as a gift for his beautiful wife. Today, she proudly adorns her kitchen and patio with those keepsakes.

Her other proud acquisition is the specially-designed aluminium kitchen cabinet which any five star hotel chef would envy.

It was flown in at RM2,800, the price of a chartered flight to Bario. Her homestay kitchen looks like a commercial kitchen in any city, if not better.

There is a wall of fame in the homestay with photos of her children and grandchildren. It’s like a who’s who in the highlands. But Sina remains humble about everything she has and who she is.

She is foremost a care taker of her environment and the right practice of gardening and seed selection part from being a keeper of indigenous cooking and a standard bearer for Christian values and faith.

A jewel among women, she has so much to teach others.