Saturday, June 19
You are at:Home»News»Sarawak»‘State award earned through hard work’ 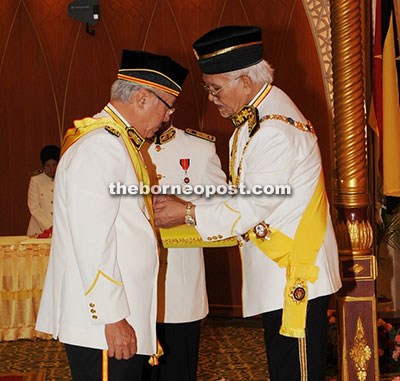 Ling receiving his award from Taib.

KUCHING: The conferment of state decorations in Sarawak does not come easily: it is something earned through real hard work.

“In Sarawak especially, to get a datukship from PGBK is not that easy. Not everybody can get it. One has to work really hard to earn it,” he said.

Ling pointed out that he began over 40 years ago with just a small company, which grew over the years and was listed on Bursa Malaysia in 2008.

“In terms of company size, we are number two for the private sector after a government-linked company of course. But for private companies, we are number one with our market capitalisation at about RM3 billion,” he said.

“Our company is dealing in oil and gas, employing about 4,000 people. All this has been achieved through lots of hardship.”

Ling added that he appreciated the recognition.

“Now at the age of 69, I am very happy today that I am awarded with this datukship. People say I deserve it, I don’t know. All I can say is that it has to be earned through hard work,” he said.

Born on April 4, 1946 in Sibu, Ling is known to be an honest, self-made and low profile businessman.

The Dayang Enterprise Holdings Bhd executive deputy chairman has successfully transformed the group from humble beginnings into a reputable Malaysian company well-known in the international oil and gas industry.

Ling was awarded the Sarawak State Entrepreneur of the Year Award in 2009.

In 2009, he was also Pei Min Middle School advisor and honourable advisor to SJK North Miri, while in 2010 he was SJK Chiaw Nam advisor.