The six feline ‘stars’ at Meow Meow Cafe are very active and friendly towards customers and visitors.

Located on the first floor of The Pet Zone, unlike any other cafes or bistros, Meow Meow Cafe offers customers and visitors their coffee/tea fix and the company of six friendly feline ‘stars’.

This unique cat-concept is said to be a big hit in Taiwan, Japan and many Asian and European countries. More recently, these cafes have made its way into major cities in Malaysia, and has since become popular particularly among youngsters.

“We saw that this concept cafe is available in other places. So, we decided, why not bring one here to Kuching.

“We have done a lot of research on this cafe. We have visited the cafe with this concept in KL to observe how they operate it.

“After about a year of planning, research and observation, and through encouragements from friends we have finally decided to open one here.

“It took us two months to set this place up and we have just opened on August 30,” said Janet, owner of Meow Meow Cafe, a subsidiary to The Pet Zone.

The main attraction; the cats, are mainly placed in a special area in the cafe, separated from main dining area, for hygienic purposes.

With more than 13 years of experience in the pet industry from operating The Pet Zone with her daughter Sherra, Janet said Meow Meow Cafe also upholds strict house rules to ensure the well-being of the cats as well as the safety of the customers.

Visitors and customers must sanitise their hands before touching the cats, remove footwear before entering the ‘cats zone’, and treat the cats in a proper way as stated in a list of house rules displayed in the cafe.

“More importantly, we want our customers to come here, relax and enjoy themselves with our cats and with the company of other cat and animal lovers. It is also for those who can’t have them in their homes for whatever reasons,” she said.

The breeds of these six cats are Himalayan Persian, Calico Persian, Himalayan and Persian, and are named Kiwi, Twinkle, Wawa, Wakayi, Suria and Yoda. While each cat possess unique personalities, Janet said, they are also carefully chosen, with ‘friendliness’ as their main trait.

The cats’ area is also kept well sanitised daily and equipped with scratch posts and various cat toys. As for the food and drinks available at the cafe, Meow Meow Cafe manager; Jason said, the food and drinks there are mainly English-European concept.

To further improve the cafe, Janet said, she encourages feedbacks from customers and visitors. 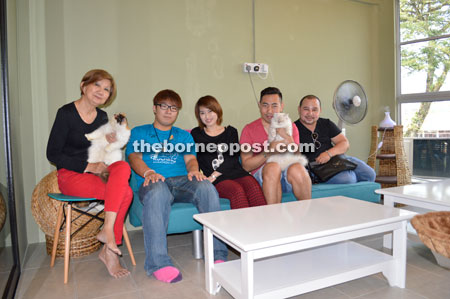 (From left) Janet, Jason, Sherra and customers of Meow Meow Cafe are seen with some of the ‘stars’ of the cafe.