Sunday, February 23
You are at:Home»News»Sarawak»Tourism Malaysia: Santubong Homestay to have cycling tours soon 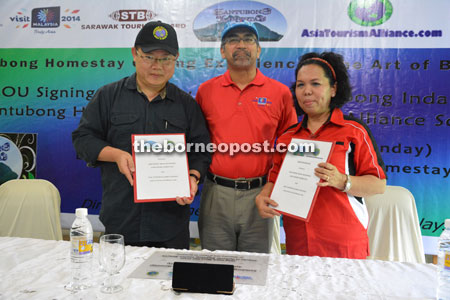 Kho and Jamilah with the signed documents as Musa (centre) looks on.

KUCHING: Santubong Homestay has marked a new programme through the signing of a memorandum with AsiaTourismAlliance.com (ATA), which will see cycling tours around Santubong as part of its offerings.

According to Tourism Malaysia director for domestic marketing Datuk Musa Yusof, the area is a perfect eco-tourism destination with its unique landscape embracing the iconic Mount Santubong.

“This area is also rich in biodiversity and historical assets, all of which will add to the rich tourism and recreational

potential of the Santubong peninsula,” Musa said after the inking of the partnership here yesterday.

He said as Tourism Malaysia realised that cycling had become a trend among locals and tourists, it had embarked on promoting cycling nationwide through the ‘Cuti-Cuti 1Malaysia Bike & Ride Packages’.

“Since the launch, we have developed 202 packages involving 95 agents and to date, Tourism Malaysia has organised 27 events relating to cycling with various partners and organisations.”

Moreover, he disclosed that total sales for these cycling packages was RM844,720 last year, while as at June this year, the figure reached RM306,729

Additionally, Musa hoped that all agents would work hand in hand in marketing these packages and at the same time, strive to leverage on ideas to offer something new to tourists.

“This is only one sample package by one homestay – imagine with a total of 31 homestays in Sarawak, you could do wonders with each community presenting its own unique characteristics.”

The new cycling tour package would add to a host of activities at Santubong Homestay, which include mountain climbing, jungle trekking, river cruising and dolphin watching.

The route will be within Kampung Santubong, nestled between the beach and Mount Santubong, where tourists can use all the bicycles – six at each guest house – without additional charge.