Monday, August 3
You are at:Home»News»Sabah»Masidi to promote Sabah in San Francisco

KOTA KINABALU: San Francisco is the next marketing target for the State Tourism, Culture and Environment Ministry in its effort to promote Sabah. 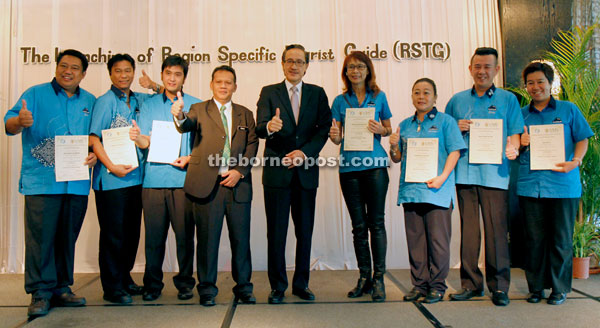 Masidi (fifth from left) and Leong (sixth from left) giving their thumbs up to the RSTG licence launch at the ceremony yesterday.

Its minister, Datuk Seri Panglima Masidi Manjun, said that he would be visiting San Francisco on September 25 and will be meeting with tourism players there.

He said that this would be the State’s first effort to promote Sabah to the Americans.

Masidi also expressed his optimism on the venture as air-connectivity that would link San Francisco and Sabah (Kota Kinabalu) is already in place.

“There are direct flights from Hong Kong and Seoul to San Francisco as well as to Kota Kinabalu. The air-connectivity is available. It is important to promote Sabah to places that have these access/facilities in place because it will not be difficult (for those keen) to come to Sabah,” he said at the launching of the Region Specific Tourist Guide (RSTG) licence here yesterday.

He added that without direct air-connectivity, it would be difficult for the people to come to Sabah.

“And we want the people to keep coming here.”

While in the US, Masidi will also be visiting Portland, Oregon which will become Kota Kinabalu’s first sister-city in the country.

In his speech, Masidi also mentioned that although his ministry may seem to have scaled down its effort to market Sabah to the Chinese market, in reality this was not so.

“We have not stopped … but they (Chinese tourists) are coming to terms with the MH370 and the kidnapping incidents. We just have to modify our (marketing) strategies. We will continue to market, but in a quiet and subtle way. We don’t want to be looked at as aggressive marketeers,” he said.

He added that the number of visitors from China had dropped in June, this year, by 47 percent following the flight MH370 incident and the spate of kidnappings involving Chinese tourists in the East Coast of Sabah.

Nonetheless, the number of Korean and Japanese tourists has risen by 19.7 percent and 23.4 percent respectively, he said.

The State also experienced a double digit growth in European and American tourist arrivals, he said.

Also seeing growth are the arrival of domestic tourists from other states, he said.

“We are also looking into other growth/market areas such as Indonesia and Singapore,” he added.