Saturday, August 15
You are at:Home»News»Sarawak»Reminiscing the old Bintulu

BINTULU: In the 1960s, the Bintulu town was merely a fishing village with a population of 5,000.

On the 16th of Sept 1963, Sarawak joined Sabah (then North Borneo), Singapore, and Malaya to form the new Federation of Malaysia.

Today, the coastal town with one of the world’s largest natural gas reserves is booming with activity, and has a population of over 200,000.

Three friends who grew up during the time share with Bernama their experiences during the transition. 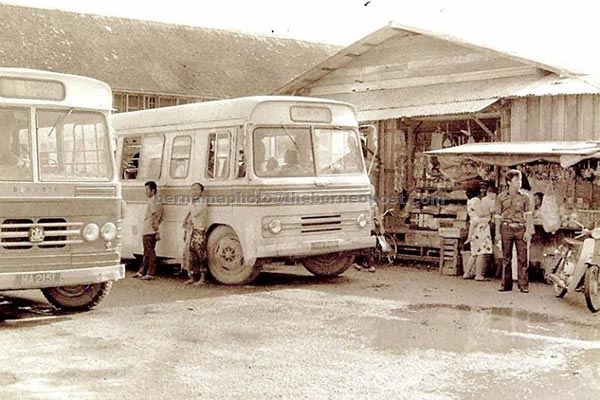 Mara buses stationed in front of the old fish market in Bintulu in the early 70s. — Bernama photo 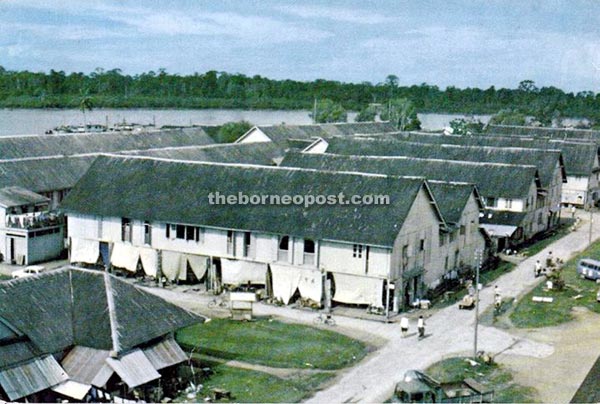 A photo of the coastal town of Bintulu in the late 1960s. — Bernama photo courtesy of Prof Emeritus Datuk Dr Mohamed Abdul Majid 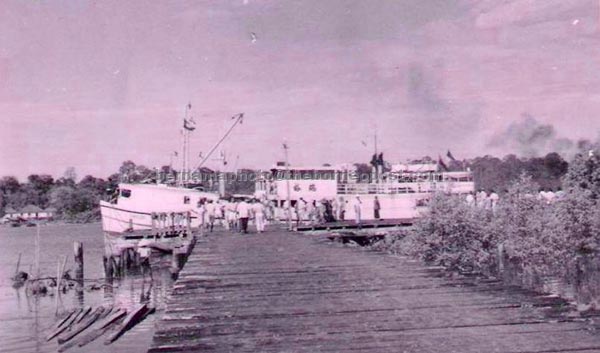 M V Swee Joo was the lifeline of Bintulu in the early 1960s. — Bernama photo

Travelling outside by land was a difficult affair in those days, said Prof Emeritus Datuk Dr Mohamed Abdul Majid, who grew up in Bintulu.

“There were no roads at all connecting nearby towns. All travelling had to be done by boats. It was only in late 60s that road construction was started to Miri,” said the 66-year-old when met here, recently.

He said the first buses introduced in Bintulu were owned by the Majlis Amanah Rakyat (Mara).

The buses plied the untarred road from Batu 18 (of the Bintulu-Miri road) to the town in 1969.

“Most of the passengers coming from Batu 18 were Iban villagers who did not have money to pay for the bus fare. Instead, they would pay the bus driver, known as Abdul Jabbar, in the form of vegetables, chickens, bamboo shoots and other items,” the former Science Faculty Dean of Universiti Malaya told Bernama in an interview.

He said the local Ibans used to refer to the bus as “bas Jabbar” as some of them would assume that it was owned by him.

“Udah datai bas Jabbar?” (Has Jabbar’s bus arrived?) would be an oft-repeated question.

Bintulu historian Mahmud Yussop, who is also Mohamed’s childhood friend, in his blog “Images of Bintulu Before and Now,” said the buses provided a much-needed public transportation for Bintulu to Miri, some 200 kilometers away.

Mahmud explained that Miri back then was the capital of the Fourth Division.

Sarawak, under the British, was divided into five Divisions and each Division was headed by a Resident. Each Residency had a number of districts.

In the early 1970’s, Bintulu was a sub-district in the Miri division and all government affairs were headquartered at Miri for the final decision making.

This arrangement made progress very slow for Bintulu.

“In the 60’s, Bintulu was in the backwaters of development. Not many people were able to buy cars in the 60’s and 70’s, so the bus service was a real boon for the general public of Bintulu,” he said.

Meanwhile, Kiprawi Aman, the supervisor of Kenderaan Bas MARA Service then, said the bus service was not so much for profit than an obligation by the federal government to provide public transportation for the rakyat.

According to Mahmud’s blog, C W Bailey, who was the Works and Building Inspector with the British Royal Air Force, began supervising the construction of the Bintulu airstrip in 1934.

“However, it was not completed because of the Japanese occupation of Sarawak. It was reported that in 1958, Bailey was killed in Singapore due to an air crash,” he said.

The Japanese made full use of the airstrip for military purposes throughout their occupation.

It was only after they left Sarawak that the British began reconstructing the airport that was very much ruined due to bombings.

Mohamed’s friend, Haidar Khan Asgar Khan, 66, remembered what it was like to grow up during the time.

The Bintulu Orphanage Welfare Chairman told Bernama that when the British rebuilt the airport, they found a lot of unexploded bombs.

“I remember when we were young, there would be these large holes filled with water where we would fish. People used to call it “lubang bom” (bomb holes) but it never registered in our minds it literally was that,” he said.

The site of the old airport is today part of a massive RM2 billion project for an integrated upmarket commercial and residential project.

“Back then, the runway was all grass. If it rains, the plane cannot land,” said Haidar Khan.

A Twin Pioneer 16-seater plane was extensively used by the Borneo Airways Limited then. It operated regular flights to Kuching, Miri, Sibu and Bintulu.

Mahmud, in his blog, said it was only after 1963 that the runway was widened and an all-weather airport was developed.

This enabled bigger capacity planes like the Fokker Friendship, which was used by the Malaysia Singapore Airlines to come into Bintulu, meeting the rising demand in air travel throughout Sarawak and North Borneo (Sabah).

The friends also fondly remembered the time when the town would look forward to the arrival of the M V Swee Joo.

Mohamed said the boat that could carry 12 passengers and goods would depart for Kuching every Tuesday and only return on Sunday.

Its arrival was eagerly awaited by the townspeople as it carried with it the weekly supply of food, essential items and postal items.

“When the boat reaches the mouth of the Kemena River, it would let out a shrill whistle. The whole town would come rushing down to the wharf to collect their goods and greet relatives. It was like a celebration,” Mohamed recalled.

The ship would also be gaily decorated if it carried returning Haj pilgrims.

“Back then, the M V Swee Joo was the only boat plying the Kuching-Bintulu route, so it was like the lifeline to Bintulu. It was only in the late 1960 that another ship, the M V Chin Chin, was introduced to the route,” he said.

The journey from Kuching to Bintulu took 36 to 48 hours depending on the sea conditions.

Haidar Khan said when it was “landas” (monsoon) season near the year end, neither the Swee Joo or any other vessels would come in for weeks.

Ships tended to capsize due to the high waves. Some would hit the sandbars near the rivermouth, killing passengers and crew members. Due to the lack of incoming supplies, food would be very scarce.

“Now I understand why my mother cooked the kind of meals she did. People back then had to be pretty inventive and make do with whatever they had,” said Haidar Khan.

Luckily, due to the minimal deforestation then, animal life was abundant. The locals with shotguns would then go into the jungles and return with a deer or two.

The town would survive on such activities until the season passes. 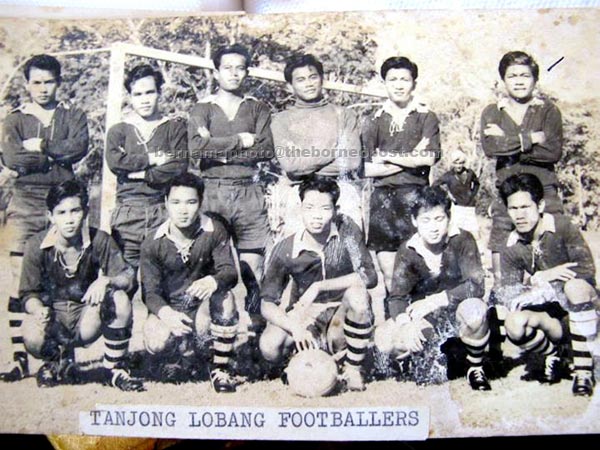 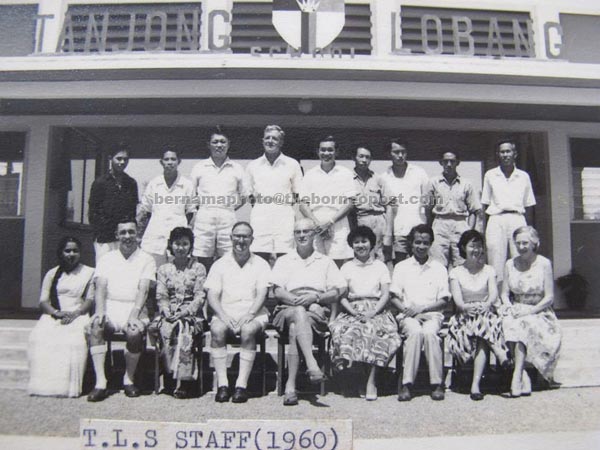 Mohamed said students from the interior parts of Bintulu such as those from Sebauh or Tatau would go to decrepit rural primary schools which had minimal facilities.

“These schools only had classes up to Primary 3. Many of these rural students would come to stay in hostels provided by the St Anthony school,” he said.

However, the most prestigious government secondary school was the Tanjong Lobang School in Miri, which Mohamed and his friends went to.

The school, built under the Colombo Plan, were staffed by New Zealanders as they were the biggest donors. Other teachers came from the United Kingdom, Australia, Canada, India and various other countries.

“It was a real international boarding school. Before they could go to secondary school, they had to sit for a qualifying examination called the Common Entrance. Only 20 per cent of the students would qualify for secondary school, while it was the end of the road for the others,” he recounted.

Since there were no roads then, students had to travel by small boats to Miri, a distance of 215 km.

“It was a journey dreaded by most students as the rough seas would cause severe sea sickness and everyone would be vomiting in the boat,” he said.

Most students would stay in the hostels in Miri, only returning at the end of the year. However, after the formation of Malaysia, a secondary school, Bintulu Government Secondary School was built in Bintulu in 1964.

Today, there are numerous secondary schools in Bintulu, as well as a branch campus of Universiti Putra Malaysia. — Bernama