Saturday, October 1
You are at:Home»News»Sarawak»Divers collect about 150kg of debris from ship wreck site

KUCHING: The 28 participants of Malaysia Day Dive 2014 (MDD) yesterday collected 150 to 200kg of debris between them after the conservation initiative at the Katori Maru Wreck. 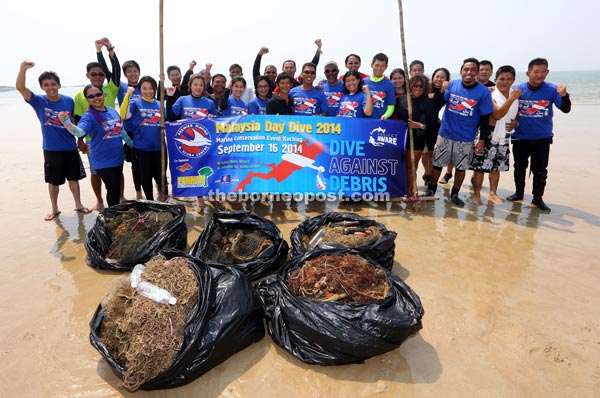 The divers celebrate a successful dive after landing on Permai Rainforest Resort’s beach. Seen in the foreground are some of the debris, mostly fishing nets, collected from the Katori Maru Wreck. (Inset) Ernest Teo — Photos by Mohd Rais Sanusi 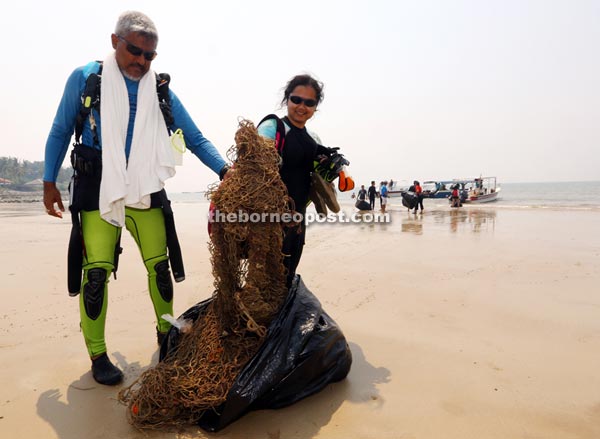 The dive marked both the highest amount of debris cleared and the highest number of participants since the inception of the dive in 2012.

According to organiser Ernest Teo of Premier Marine and Scuba Centre, the ‘Dive Against Debris’ programme was a global initiative where divers would remove debris from a targeted site.

“Historic Katori Maru is a dive site that is getting popular. We organised this so divers
can come and work together to remove debris from the site in the hope of improving the health of the reef.”

Because of the higher level of difficulty involved in diving to a depth of 21 meters to the 130 by 20 meter World War II wreck, they only accepted certified PADI Advanced Open Water level or its equivalent.

Teo estimated their haul to be two or three times more than last year’s. In their previous outing, they collected about 65kg of man-made debris comprising fishing nets abandoned by trawlers. This year, discarded fishing nets also featured prominently.

“Most of the nets were abandoned after they got stuck to the shipwreck. Let there, the ecosystem of any reef will be affected,” he said.

He added that six among this year’s participants came from Kuala Lumpur to participate
in the dive. Tourism Malaysia (Sarawak) staff were also part of the group. Last year’s divers
were locals or Kuching-based divers.

Teo added that the debris from this trip would be identified, photographed and made available to policy makers to improve conditions of Kuching’s open waters.

Teo, who is a familiar face in the scuba diving industry in Sarawak, said that MDD wanted to educate divers about the impact caused by human activities on the marine landscape.

“It also allows divers a way to give back to the community by participating in conservation projects.”