Saturday, January 29
You are at:Home»Sports»Athletics»Big names set to compete in Sibu Open

SIBU: About 500 local athletes have entered the fray for the Sibu Open Track and Field Championship to be held at Tun Zaidi Stadium here on Sept 27 and 28. 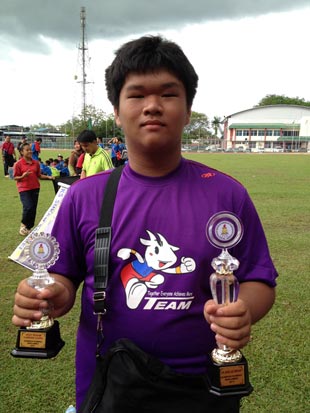 Thrower Eric Tiong from SMK Tong Hua, Meradong will be among the star-studded Sarikei team for the coming Sibu Open Track and Field Championship.

While the number was less than last year’s meet, Sibu Amateur Athletics Association (SAAA) secretary Ting Siew Nguong said the expected higher standard of performance might have dampened the hope of other first-timers to join.

“Nevertheless, as we edge towards the final showdown, we do expect late entries to come in,” he added.

Sarikei Selected is sending the biggest contingent of 69 athletes in its quest to wrest the overall title.

Both Queenie and Grace did not participate last year as they were competing in the Asian Schools Athletics Championship held in Pahang.

Sarikei coach Ling Neng Thung has remained modest, saying they were only targeting about five to six gold medals.

“We have yet to assess the full lists of the number of participants and it is difficult for us to determine the number of gold medals we can get,” he said.

SMK Tabuan Jaya, in its bid to retain the title, is also sending a 50-strong contingent which includes sprinter Norris Foo and multi-talented Quek Lee Yong. The duo, who have been creating waves in state and national competitions, also missed last year’s meet due to the Asian schools meet.

SMK Chung Hua Miri is sending 53 athletes with former Sukma champion Kee Siew Lian as the most notable name in the team.

Kee will compete in the women’s Open 100m, high jump and long jump. The 27 athletes from Axis Track and Field Kuching will be led by reigning Sukma 400m champion Mohamad Arif Zulhimi Alet.

Ting was happy with the overall number of participants, saying the offering of cash prizes to the top three winners in selected events could be the main bait.

SAAA is believed to be the only athletics association in the country that offers cash prizes to the top three winners of the selected events.

Coneli Sports from Kuching is the latest company to join the list of sponsors. They will support the 4 x 100m Open and Under-11 categories.

The top three winners from the ten selected premier events will get cash prizes ranging from RM50 to RM300.

In addition, Ting said team event winners for the open category would get a separate cash incentive of RM500 for the champion, RM300 for second and RM200 for third.