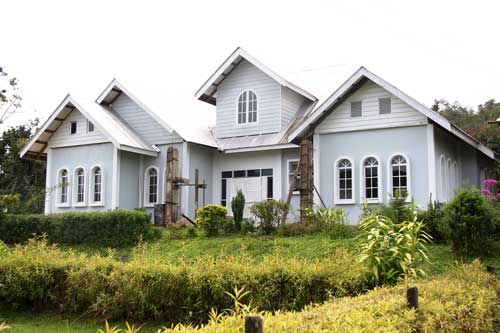 There is a growing number of houses in Long Tanid whose designs are based on homes more likely to be found in European countries, such as this nearly completed brand new house.

THE monotony of long-distance travel was beginning to numb our minds and weigh heavy on our eyelids as our Isuzu pickup stoically rumbled along the rough gravel and dirt road that wound its way up the undulating landscape of Long Semadoh in rural Lawas District.

We were about three hours drive from Lawas town, on our way to the Lun Bawang village of Kampung Long Tanid, one of 11 villages situated in Long Semadoh just before Ba Kelalan.

As our trusty ride crested the hilltop, the sparse wall of shrubbery that lined the road parted to reveal emerald green rice fields, bordered by mist-crowned mountain forests that marked a beautiful contrast to the crystal blue skies overhead. Sitting serenely in the centre of the patchwork of fields was our destination.

“This view is what Long Tanid is known for. Many people stop at this spot to take photos of the rice fields and mountains,” said our driver, local resident and homestay coordinator Balan Berauk, as he slowed the Isuzu down to allow us to soak up the postcard-perfect landscape.

Compared with Bario and Ba Kelalan, the highlands of Lawas tend to not feature as much in the travel plans of tourists and visitors passing through the northern regions of Sarawak — which is a shame as they have much to offer.

Life here harks back to simplier and kinder times where everyone seems to know everyone else on a first name basis. Being a good neighbour is a way of life.

Hospitality is not just reserved for blood relations as the local Lun Bawangs tend to pride themselves on being warm and generous hosts. It’s not uncommon for anyone who drops by for a visit to be invited to stay for a meal.

The landscape is still scarcely touched by the visceral scars of logging and oil palm plantations, in turn, supporting a wide range of wildlife and biodiversity and acting as water catchment areas for the many clear rivers and streams that cascade down the hills.

“What’s so special?” some may ask.

After all, it could be argued these things can easily be found elsewhere in the state without having to travel as far inland as Long Semadoh, where modern conveniences like mobile telephone and Internet communications are practically non-existent and most locals still rely on generators and micro-hydro dams for electricity.

But take a closer look, and you might be very surprised at what you may discover hiding in plain sight. 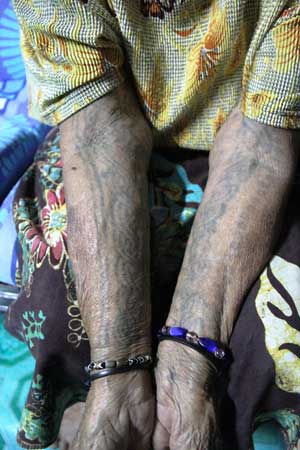 Udang shows the details of the arit belipid tattoo on the inside of her forearms. It was once believed that the tattoo would help show its owner the way into the afterlife.

First-time visitors to Long Tanid may find themselves doing double takes when they see the European-style houses dotted throughout the village. In fact, a few of those houses would not look out of place on the slopes of the Swiss Alps.

Amidst the green grass fields, grazing buffaloes and wooden houses with the traditional roofs in the shape of a wooden mortar used to separate rice grains from their husks, one can find brick houses with French-style windows, plastered ceilings and solid hardwood doors.

According to Balan, this unique situation came about when one of the village’s sons – a lawyer who lived in Lawas – built a house there that incorporated a European style design.

It didn’t take long for the idea to catch on in Long Tanid and other residents began following suit. This was also helped by the fact that a number of the locals are skilled carpenters and construction workers.

Many of the designs were inspired by pictures, published in a particular home magazine and those found on the Internet. However, the westernization is limited mostly to outside appearances, Balan shared, adding that the insides of houses tend to follow local conventions. 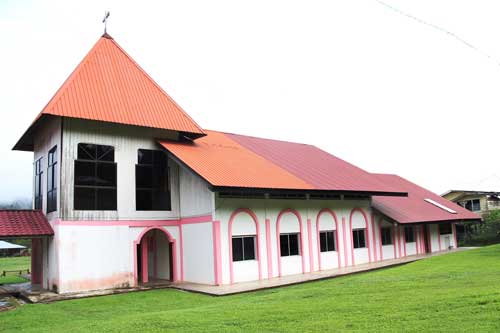 The unique exterior and front stage area of the Borneo Evangelical Mission church in Long Tanid.

“More people are building new homes that follow this style but we still have a lot of houses that follow the normal styles. Other villages are also starting to copy the designs but Long Tanid was the first to do so,” he said.

The Borneo Evangelical Mission church at Long Tanid was one of the first buildings in the village to adopt a western-inspired design with a low spire, large windows and distinct wood panelling, according to Balan.

The homes and church are a testament to local creativity and ingenuity, made all the more extraordinary when one considers the relative isolation of the village and the fact that there is no telephone reception here and electricity is only possible with the aid of invidually owned diesel generators and a nearby micro-dam.

Ties to the past 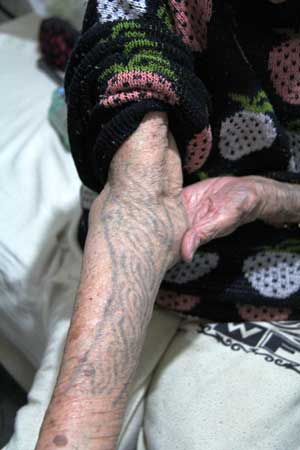 Kapit showing the arit belipid tattoo on one of her arms.

Although the outside world is slowly making its way into Long Tanid, many reminders of the local people’s rich heritage and traditions still exist but a number of them are no longer being practised.

Udang Ukab and Kapit Barok are the only two remaining people in Long Tanid to bear unique tattoos called arit belipid which have a twisting design, usually on the inside of the forearms and which carry significant meaning in their Lun Bawang community.

Udang, a lovely lady with a sweet smile who laughingly refused to disclose her age, said she got the tattoos in her late teens.

“It wasn’t a compulsory practice. It depended on the individual,” she shared in Lun Bawang, speaking through Balan who acted as a translator.

This type of tattoo was only reserved for the women, but Udang says she is not sure why it was so.

“It would normally cost one tajau (a large jar prized among Sarawakian native communities) to get the tattoo artist to come to tattoo both arms but I got mine at no cost as the tattoo artist was visiting at that time,” she remembers.

“He started tattooing in the morning and did not stop until the tattoo was finished hours later. I did not feel any pain although my arms become swollen,” Udang said, adding that she also did it just for fun.

The ink used in the tattoo was derived from the smoke of a particular type of resin as it was burnt. It was believed the tattoo would help to light the way like a torchlight into the afterlife when the owner passed away.

Kapit, distantly related to Udang through marriage, also got her tattoos when she was in her teens but for a different reason — Lun Bawang maidens who had these tattoos were seen as more attractive and could command higher marriage dowries.

“I followed in the traditions of my mother and grandmother who also had these tattoos. My mother’s  were different though with more straight lines while my grandmother was more heavily tattooed than both of us,” she shared, with Balan acting as translator.

Her tattoos are different in design compared to Udang’s as they were done by different tattoo masters.

“I didn’t feel scared but getting tattooed was very painful. I remember the blood coming out. I didn’t encourage my children and grandchildren to follow what I did,” said Kapit who told thesundaypost she was born in 1916.

Udang and Kapit are all too aware they are the only ones of their generation left who have these unique tattoos.

“Everyone of my age (who has these tattoos) has passed away. My daughters and granddaughters do not have them,” said Udang who still has a sharp memory and an almost fully-black head of hair despite getting on in years. 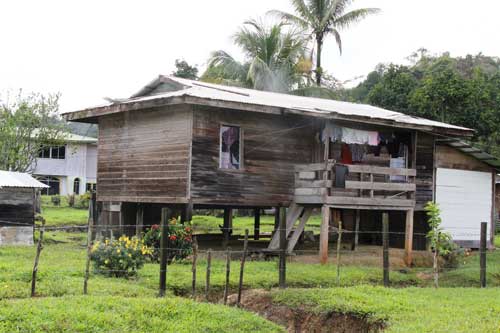 This is one of the few houses in Long Tanid which retains its traditional roof built in the shape of a mortar used to keep or separate rice grains from their husks.