Sunday, February 23
You are at:Home»Features»Niah Caves

Making sense of its occupation by early peoples 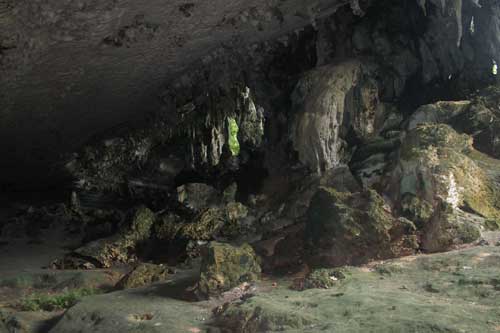 Burials began in Niah Cave about 6,000 years ago. — Photos by Mary Margaret

WE begin with a new perspective and new dating of the Niah Cave complex. Imagine, if you will, the caves facing an arm of the seaside that worked its way inward 6,000 to 10,000 years ago. This time period is known as the Holocene and dates from 11,000 years ago to the present. It is the end of the last glacier advance, or the ice age. Sediment cores outside the cave confirm this.

The peoples of the region were going through a change in that they had started to bury their dead. Death was a major tragedy for them and brought about many hardships. The demise also negotiated the crossover between the natural and supernatural world. The burials began in Niah about 6,000 years ago, during the early Holocene period.

The people of the area had two sources of food. The first was the closed tropical rainforest, which provided bearded pigs and monkeys. There were occasional cattle, tapir and deer. The second source was brackish seawater. The riverine-estuary environment brought turtles and clams. Edible plants such as yams, taro and sedges were also present and vines probably helped the people make baskets. There was also evidence of basic stone working.

One of the major problems in excavating the remains and determining the dates was that Tom Harrison and his wife Barbra attempted to crudely dig up the graves and date them. They scattered the bones and left the place in a mess. Scientists are now trying to piece together what is left. (see ‘The Most Offending Soul Alive: Tom Harrison and his Remarkable Life’ by Judith Heinmann.)

One of these people is Dr Lindsay Lloyd-Smith, who is attempting to make some sense out of the erroneous conclusions offered by the Harrison clan. She offers a reclassification and re-dating of the scene.

There are three distinct burial clusters in Niah Caves. The first, and oldest, was located in the back of the west cave, while the second one was several metres south at the cave entrance. The most common type of interment was the body in the flexed position.

The flexed position was where the body was placed in the grave with its arm and legs bent. The positions were that the “arms were tightly bent at the elbows with the forearms bent upwards”. A second category is where the arms were only loosely flexed.

The second type is the seated burials. Here, the legs are splayed forward while the upper body part was laid or fell forward. There are four graves that match this description.

The third type should be called mutilation. All those missing a head or other parts or cremated before burial fall into this category.

The one thing that is known is that the burials were not continuous. The graveyard was used over short periods of time with long intervals between burials. This occurred over several centuries.

The flexed burial system was used throughout Southeast Asia during the time period of the early Holocene. In Kalimantan, at the site of the Kimanis people, two flexed graves have been discovered. They have been found at the upper reaches of the Birang River. Other flexed burial sites have been reported in Gua Tengorak, also in Kalimantan.

The Gunung Sewa Mountains of East Java also have burials of flexed remains as do the Ille Cave on Palawan in the eastern Philippines. The Da But coastal communities of North Vietnam and the Aru Island all date during the same time period as those in Niah Caves. Much later, they would be found in the interior (not coastal) of the Malay peninsula.

The research by Lloyd-Smith states that this was the time period where culturally, the people began to bury their dead. She has connected the burial sites at Niah with the sites in Kalimatan, Java, Vietnam and later Peninsular Malaysia. She has reorganised Harrison’s work and prepared a different way to view the data. 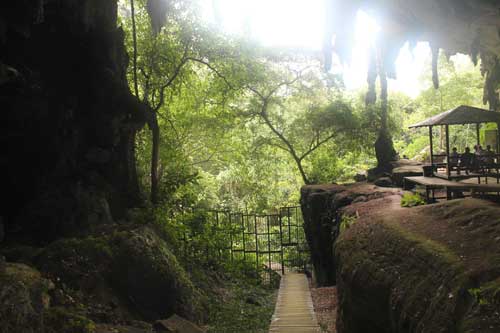 Visitors are seen at a rest area in the Niah Cave complex.

The Malaysian Nature Society
Established in 1940, the Malaysian Nature Society is the oldest scientific and non-governmental organisation in Malaysia. Our mission is to promote the study, appreciation conservation and protection of Malaysia’s nature heritage. Our 5,000-strong membership, spread across 12 branches nationwide, come from all walks of life, bound by a comment interest in nature. For further information on membership or our activities in Kuching contact us at mnskuchinggmail.com. For information on our activities in Miri contact Musa Musbah ([email protected]). You can also visit www.mns.org.my, http://[email protected] or www.facebook.com/mnskb.