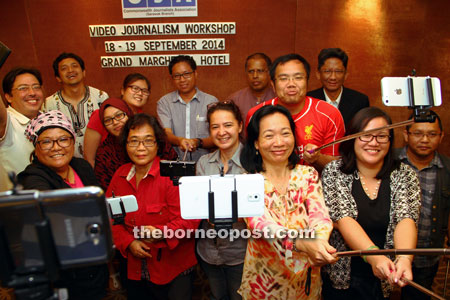 Caroline (second right) and other participants of Video Journalim Workshop have fun using the monopods to take a ‘wefie’ (group photo). — Photo by Chimon Upon

KUCHING: Professionals, including journalists, should always pursue knowledge and skills to stay competent.

“Youtube and Whatapps are among the popular tools to reach the masses; thus, media practitioners should be well versed with what the social media has to offer to better disseminate accurate information,” he said at the closing of the Video Journalism Workshop at Grand Margherita Hotel here on Friday.

Riot said the workshop, organised by the Commonwealth Journalists Association (CJA) Sarawak, was in line with his ministry’s aim to produce a more skilled and knowledgeable workforce.

“We want to help train journalists in tandem with the government’s objective to produce a skilled and knowledgeable workforce by 2020,” she said, and hoped the government would help fund CJA Sarawak’s activities.