Wednesday, June 16
You are at:Home»News»Sarawak»Socso strained by RM100m for kidney dialysis — Riot 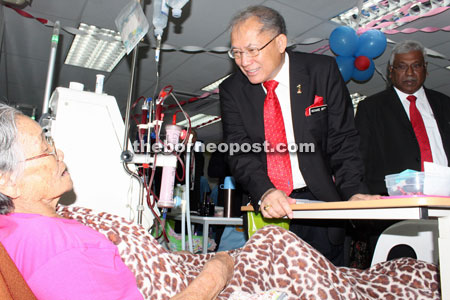 Riot talking to a patient at the dialysis centre.

KUCHING: The rise in the number of people insured by Social Security Organisation (Socso) suffering from chronic kidney problem in the country is said to be very worrying, with at least RM100 million spent annually on dialysis.

Human Resources Minister Datuk Seri Richard Riot said data compiled by the agency showed that the number of those covered under Socso protection scheme suffering from kidney failure had been increasing by 17 to 20 per cent every year.

He said based on that, Socso, which is one of agencies under his ministry was stepping up efforts to look at the needs of the insured persons so that they could continue to live a normal life.

“One of the programmes Socso has introduced since 1999 is dialysis support programme and up to August this year, a total of 10,004 applications have been approved for insured persons suffering from kidney problems throughout the country.

“To facilitate dialysis treatment for this group of people Socso has established 449 dialysis treatment centres nationwide, out of which 118 are under NGOs (non-governmental organisation) and another 331 operated by private,” he said.

He said this in his speech at the presentation of two dialysis machines to Kidney Association of Sarawak (KAS)-Rotary-National Kidney Foundation (NKF) Malaysia Kuching branch at their dialysis centre here yesterday.

“The overall cost spent on insured people with kidney problem has been on the rise each year.

“For instance for the whole of 2013, Socso spent RM122.8 million to help those who required dialysis treatment.

“The amount was 17 per cent more from what Socso had spent for similar programme in 2012 at RM104.6 million.

“For this year, from January till August Socos has spent RM81.13 million on dialysis treatment,” he said.

In Sarawak, Riot said up to last month a total of 438 people were receiving dialysis treatment with the cost fully subsidised by Socso.

“Realising this fact, Socso has appointed 13 dialysis centres as its panels to provide facilities to kidney suffers throughout the state where KAS-Rotary-NKF dialysis centre is one of them,” he said.

After the ceremony, he told the media that with the additional two units sponsored by Socso yesterday, KAS-Rotary-NKF dialysis centre now has four dialysis machines.

“With the additional two machines, costing RM40,000 each, Socso now has a total of 37 units for whole Sarawak. We have seven in Miri, Bintulu (three), Sibu (eight) and the rest here in Kuching,” he said.

Meanwhile, NKF Malaysia chairman Datuk Dr Zaki Morad Mohamad Zaher who also spoke at the presentation ceremony, stated that the foundation will be setting up a dialysis centre in Sarikei and expected to be operational starting early next year.

“It will start off with six machines. We have got the approval from the Health Minister and now we are getting the building ready and hope by early next year, it will be able to operate,” he said.