Thursday, April 9
You are at:Home»News»Sarawak»Abg Jo: Bintulu kite festival to be national event

BINTULU: Next year will be a ‘Festival Year’ for Malaysia and the Borneo International Kite Festival (BIKF) will be made a national event, disclosed Tourism Minister Datuk Amar Abang Johari Tun Openg. 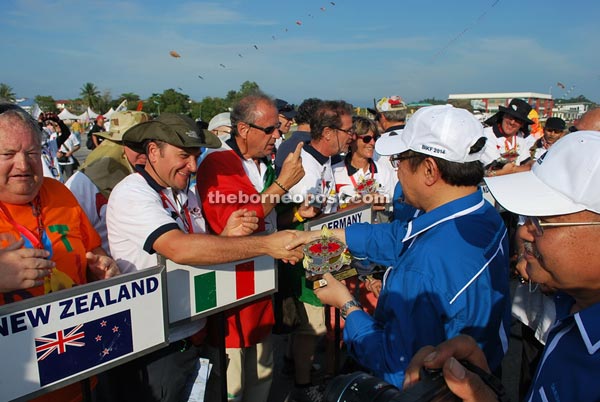 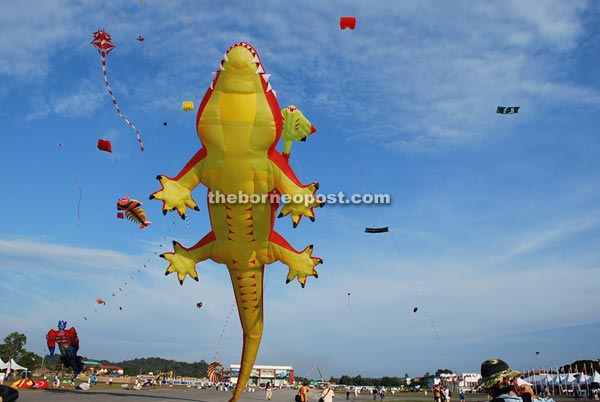 The giant crocodile kite, one of the latest giant kites in this year’s festival.

He said in order to attract more tourists to Sarawak, a special exhibition will be held and BIKF will be an anchor event in the national tourism calendar.

This idea, he said, would be further discussed with federal Tourism and Culture Minister Datuk Seri Mohamed Nazri Aziz.

He announced this when officiating at the opening of the 10th BIKF at the site of Bintulu
Old Airport yesterday.

“This is a very interesting event for our tourism industry and we have been promoting it in websites and overseas and this year looks better than last year,” he said.

He noted that kite making now is different from the old days as it tests the skills of the kite makers.

“Now we have to consider climate change, the wind and the weight of the kite,” he said, adding that what was important was to make sure it could fly.

On the event, he said it should be further promoted as it has a spill-over effect on local economic activities.

“From this event the people are interacting with each other and this can promote greater understanding among the multiracial ethnics,” he pointed out.

On Bintulu, he said apart from being known as an industrial town, it also has an attractive setting.

“Bintulu is expanding and we will continue to develop this town but at the same time the indigenous cultures will be preserved,” he said.

Over 400 international participants from 26 countries are taking part in this year’s festival.

Meanwhile, he also disclosed that the number of tourist arrivals to the state is expected to be more than 4.3 million by the end of this year.

“From January to August this year we recorded more than two million tourists which is an increase of nine per cent,” he added.

Also present during the event was Assistant Minister of Tourism, Datuk Talib Zulpilip.