Sunday, February 23
You are at:Home»News»Sarawak»DJ Roundhead to be featured at Asia Music Festival

KUCHING: Asia Music Festival will be featuring a DJ gig for the first time this year in which Malaysian famous DJ Roundhead will be playing at the post-festival late show on Oct 3 and 4. 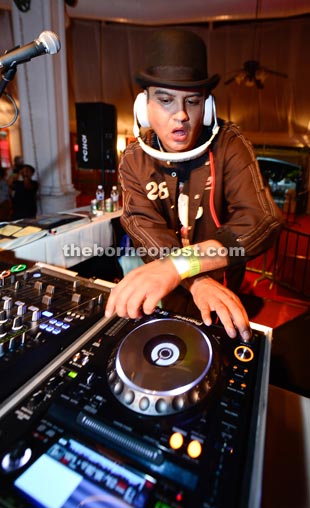 DJ Roundhead will be spinning at the Asia Music Festival in Miri.

Asia Music Festival, now in its second year running, will bring again the very best eclectic mix of live music together for one mind-blowing weekend in Miri.

According to a publicity release yesterday, DJ Roundhead will also be playing a huge array of famous dance music during a break between each band both nights.

Performing as a DJ for at least 20 years, DJ Roundhead was once crowned as the ‘Malaysia DJ Champion’ three years in a row when he entered the Malaysian DJ Championship competition from 1995-1997.

When he was in high school, he would work part-time jobs during the weekend just to blow it all away on CDs and records.

That made him the ‘go-to-guy’ when it came to house parties from high school all the way to college.

DJ Roundhead would bring his own player and set up his own mini console and rock the crowd at the party.

Only after college did he join a company during the 90s called Clubworld Entertainment that supplied DJs to entertainment outlets around the country, where he started his professional career.

Among his best moments was representing the country in the Rotterdam Love Parade in the Netherlands for a strong crowd of 10,000 on a 34-wheel trailer while proudly flying the Malaysian flag in front of his console.

He played as a DJ residence in Melbourne, Australia, for a year before returning to the country and is currently attached to TraxxFM in Kuala Lumpur.

The major challenge for any real DJ is being able to perform under pressure.

The most interesting bit is studying the crowd earlier before any performance without undermining their expectations of entertainment.

According to DJ Roundhead, a real DJ can tell if a record or a song is going to be a hit or a dance floor filler. Knowledge is the key for everything.

Asia Music Festival will also incorporate a range of Asian food as well as tattoo exhibition so there will be something for everyone.

The festival will start at 5pm daily with a tattoo exhibition as well as food and village mart.

Stage performance will begin at 7:30pm until midnight, followed by the DJ set with DJ Roundhead until 2am.

Eight international bands have been confirmed for this year’s festival.

Tickets are now at a pre-sale price of only RM25 for adults and RM10 for children/student (aged 3-18) at www.asiamusicfestival.net .

Door-sale tickets are priced at RM30 for adults and RM15 for children/students.