Tuesday, May 18
You are at:Home»Features»Highly valued wood for rural community 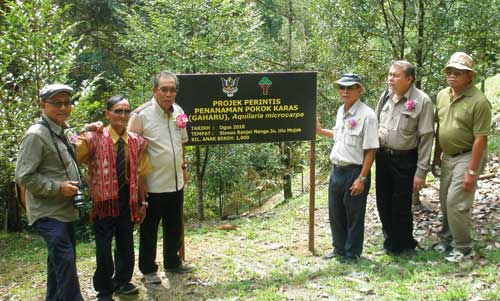 LOCATED on a hilly land near SK Nanga Ju, Ulu Mujok Julau, are hundreds of gaharu trees planted for trial.

Also known as agarwood, these trees are among the 1,000 surviving seedlings cultivated on the Sarawak Forestry’s ranger station.

Under the Sarawak Forest Department, this pioneer project is helping to conserve the aquilaria microcarpa species and serves as a learning field for the folks from Rumah Anthony Bau, an Iban longhouse about 40km from Sibu.

The longhouse is accessible by river or a four-wheel drive vehicle through logging tracks.

A one-way longboat trip to the longhouse from Nanga Entabai in Julau may take between three and four hours, depending on the water level.

Situated within the Lanjak Entimau Wildlife Sactuary (LEWS), Rumah Anthony Bau is one of the longhouses picked by the Sarawak Forest Department and International Tropical Timber Organisation (ITTO) for its community development project.

The gaharu pioneer project at Nanga Ju is also to sustain the ITTO-sponsored community development projects, aimed at helping the local community to improve their livelihood and reduce their over-dependence on forest.

It was initiated by the Community Service Initiative (CSI) division of the Sarawak Forest Department in 2010.

So far, the project has achieved 80 per cent success in terms of the trees survival.

Following this, the gaharu planting programme was extended to the community at the 19-door Rumah Anthony Bau.

For a start, each family was given 20 seedlings to be planted near the longhouse compound which is between 20 and 30 minutes boatride from the Ranger Station.

The gaharu plant is one of the forest products (exclude woods) with a good future prospect. It can support a reforestation programme established by the government.

It is also believed hugging a gaharu tree is auspicious and the tree has healing properties which can be tapped into by breathing the fresh air in the plantation.

The management of a gaharu plant is not much different from other plants’. The intensive treatment and maintenance involved can stimulate its growth.

The tree becomes valuable only after getting infected by a particular fungus or group of fungi. It then ceases to grow and becomes sick in the population stand. This is normally done by inoculation.

The agar oil or agaru is, thus, a product of disease caused by certain fungus.

Chai, a former botanist with Sarawak Forestry, said the gaharu tree is usually inoculated at the age of five or six years, depending on the plant’s diametre.

An inoculation is a synthetic infection process made by entering the inoculants or viruses through holing the plan. Thus, the plant will die and the dying wood will become the perfume substance.

Chai said farmers may begin to get the resin from a gaharu tree after eight years or more.

He added that infection may also occur due to mechanical or natural injuries on the stem or branches.

“Infection is possible because gaharu is actually a rotten wood,” he noted. 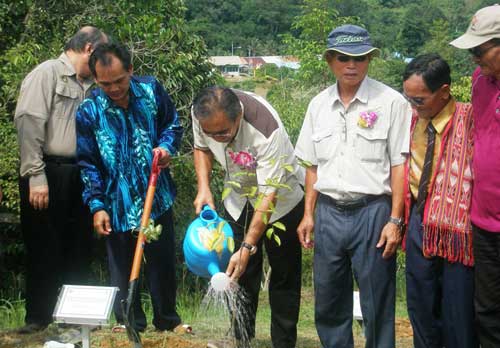 Len (centre) watering gaharu seedlings he just planted at Nanga Ju. On his left is Salang.

Gaharu is among the most valuable tree species found in Sarawak.

Chai said at least three species had been identified in Sarawak so far but only two had been widely planted — aquilaria malaccensis and aquilaria microcarpa. The other species is aquilaria beccariana.

These three species are commonly found in the plain hill slopes and ridges of up to 750m in both primary and secondary lowland dipterocarp forests.

Cultivation of aquilaria microcarpa or aquilaria beccariana in Sarawak is said to be in the form of in-situ mixed cropping system, home-garden and ex-situ intercropping (mixture of timber and aquilaria species).

The earliest record of aquilaria microcarpa tree cultivation was back in early 1960’s when the Kenyah community in Long Gang, Belaga, collected and traded in wild gaharu.

The Sarawak Forest Department has also implemented the gaharu cultivation project for the local community in Ba Kelalan   adjacent to the Pulong Tau National Park (PTNP).

Its deputy director Wan Shardini Wan Salleh said the department provided the seedlings while the community did their own clearing and planting.

“About 5,000 seedlings have been planted in Ba Kelalan as our community development project.

“The villagers planted them, make sure they survive until they all grow while we monitor, enrich and provide seedlings for replanting if the plants die.

“In addition, we will continue supporting and assisting them all the way to boost their confidence in their undertaking and in Sarawak Forestry.”

He added that the department may also help in the inoculation if the need arose.

A number of communities are said to be living adjacent to the PTNP, including the Lun Bawang to the north, the Kelabit to the east and south, the Sa’ben to the southeast and the Penan to the west and south.

PTNP, comprising 59,817 ha, lies in the northeast of Sarawak and was gazetted as a national park in March 2005. Its gazettment covers an area that includes Sarawak’s highest mountain — Gunung Murud.

The Pulong Tau national park is located between the Limbang and Marudi districts in north-eastern Sarawak.

Wan Shardini said the gaharu project might be extended to the communities near other Totally Protected Areas (TPAs).

He noted the extension would be considered upon request and their agreement to maintain the farm themselves.

He said the department only provided the seedlings while the farm maintenance and plant treatments were to be done by the villagers.

According to him, a hectare can be planted with about 600 trees. 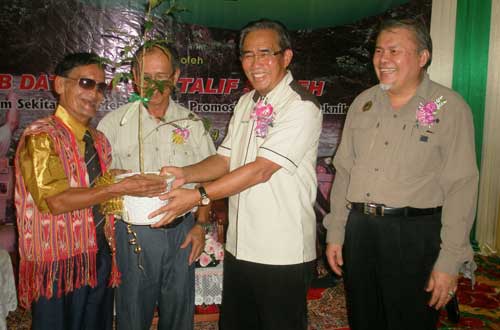 Incense of the gods

Gaharu or aloewood has a fragrance so sublime that its afficionados dub it the “incense of the gods.”

The demand is still so high that the gaharu-producing trees, specifically the aquilaria species in the wild (called karas in Malaysia) are now listed under Appendix II of the Convention on International Trade in Endangered Species of Wild Fauna and Flora (CITES).

The authority to issue CITES permit in Sarawak is the Forest Department.

Agarwood is perhaps the most prized non-timber forest product traded in the international market.

The establishment of forest species producing agarwood is gaining attention at both national and local levels as the resources from the natural forest are depleting over the years.

Planters see this type of plantation as the green ‘gold mine’ of the future if there is a breakthrough in inoculation technology.

Because of its fragrance, agarwood has a wide range of uses. Both the wood and oil are highly prized for the scent produced. The scent is released by burning the wood.

Agarwood can be used for many things such as perfumes, room fragrance and joss sticks.

It has also proven to be a potential source of new genes as well as new products particularly drugs, making it valuable to the international agricultural and pharmaceutical industries.

Because of its wide uses and demands, many investors are looking seriously at planting agarwood as plantation investment.

In addition to the commercial project, gaharu tree planting can also be integrated with a reforestation programme to maintain and enrich the greenery in the environment.