Sunday, February 23
You are at:Home»Features»Payeh Maga: Lawas’ Garden of Eden 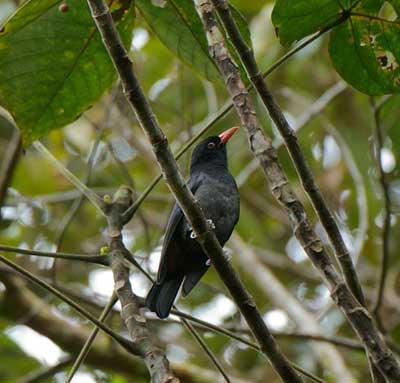 HORNBILLS, leopards and bears, oh my! Just the thought of coming face to face with even one in the wild, is rare enough and will set anyone’s heart racing, but all three?

It’s not impossible if you are trekking through Payeh Maga near the Lun Bawang village of Kampung Long Tuyo in Lawas District.

Up until a few years ago, Payeh Maga was virtually unknown to the outside world, unheard of even to many Sarawakians.

Today, it is fast gaining international attention as a birdwatching hotspot, thanks largely to a chatty, little black bird – the Bornean Black Oriole (Oriolus hosii).

The presence of the Black Oriole at Payeh Maga first came to light following a preliminary survey in October 2010 by naturalist and wildlife photographer Ch’ien Lee.

The survey revealed a number of endemic bird species, including the Black Oriole which some researchers call Sarawak’s most mysterious bird because so little is known about it.

Subsequent expeditions, surveys and field trips have added to the known number of bird species in Payeh Maga. At last count, based on a survey conducted in February this year by Lee and Yeo Siew Teck, there are so far 183 bird species confirmed to be present, of which 27 are endemic.

These 27 species represent over 50 per cent of the known number of Bornean endemic species so far which include the Bare-headed Laughingthrush (Melanocichla calva), Whitehead’s Spiderhunter (Arachnothera juliae), Bornean Frogmouth (Batrachostamus mixtus) and Mountain Serpent-eagle (Spilornis kinabaluensis).

However, there is potential for this number to be much higher given how little is known so far about the area.

Lee and Yeo estimate the avifauna diversity to probably exceed over 250 species in total.

Thus, it’s little wonder that Payeh Maga is generating so much excitement amongst researchers and birdwatching enthusiasts.

Payeh Maga has much to offer nature enthusiasts as thesundaypost found out during a trip there.

Our base camp for the two-day, one night visit was Camp 1 – a simple wooden shelter built by Forest Department of Sarawak (FDS), also known as Black Oriole camp because of frequent sightings of the said bird near the site.

The three-hour walk to base camp from the main road was not difficult as it followed a disused logging trail. Along the way, our porter and guide Dawat Barok from nearby Kampung Long Tuyo pointed out fresh markings of wild boar, deer and musang in the dirt path still muddy from rainfall during the night.

He said he had also seen sun bears and clouded leopards but at higher elevations.

While villagers from Long Tuyo regularly hunt wild boar and deer here, it is also used as a Gunung Doa (prayer mountain) by the local Christian community.

A small site near a massive natural rock formation about 15 minutes off the main trail has been set aside for this purpose. Each village has its own building and is responsible for maintaining it although there is also a two-storey pastor’s house and a large open-air hall which can easily seat 200 people.

However, the path to the prayer mountain is now overgrown due to lack of use. Dawat said the various villages only visited on special occasions about once a year or once every few years.

According to him, the name Payeh is derived from the surrounding environment (Payeh = kerangas and Maga = name of the area)

Having lived here his whole life, he is as familiar with the area and its residents as they come – as evidenced by his copious knowledge about local traditions and practices as well as impressive outdoor skills.

He managed to entice an obliging black oriole to come out into the open close enough for us to take a photo of, using a series of whistles to mimick its call during a short but playful exchange.

Unfortunately, the lack of a suitable zoom lens resulted in a photo of a tiny black blob on a branch. thesundaypost will just have to be satisfied with the memory of seeing the rare bird in person.

Dawat thinks one possible reason why so many species of birds can be found at Payeh Maga is that the Lun Bawangs traditionally don’t hunt them.

“It’s more difficult to hunt them as compared to bigger and more abundant prey like wild boar and deer. Birds also don’t have a lot of flesh, so they don’t make good eating,” he explained.

There have been recent sightings of endangered proboscis monkeys in the area – which is unusual as this species tend to prefer living in coastal areas and along rivers.

It remains to be confirmed whether their unexpected presence at Payeh Maga is due to factors such as loss of habitat but the increase in sightings as well as the sizeable number of monkeys suggest a possible breeding community.

It has also been said Payeh Maga is located along a migration trail of the Sumatran rhino but sightings are unconfirmed as yet.

During the three-hour trek from Camp 1 via a short-cut to the higher plateau where Camp 2 is located, we saw a number of hornbills flying in the distance, and also what appeared to be a raptor circling overhead, probably hunting for prey.

On the way back, we saw more hornbills and fleetingly glimpsed a pair of gangly wak-wak (gibbons) swinging flamboyantly through the trees like death-defying high-wire trapeze acrobats.

There were other species of birds present as well as evidenced by the many different calls we heard but spotting and correctly identifying them is a different challenge altogether for the inexperienced. I was satisfied enough with having seen the Black Oriole in person. 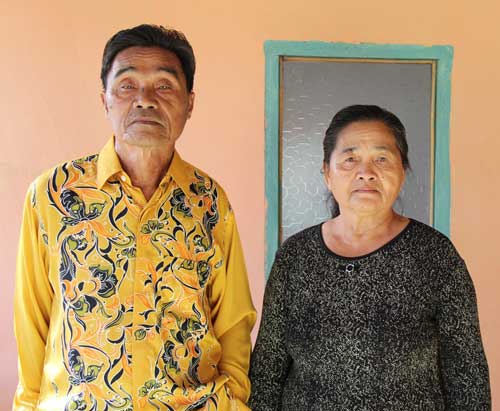 Long Tuyo headman Salimun Baruk, pictured here with his wife Dayang Duguk, says the villagers are interested in setting up a homestay programme to tap into the interest in Payeh Maga as an ecotourism destination.

Paradoxically, logging may have played a role in encouraging the high level of avian biodiversity at Payeh Maga, according to Heart of Borneo (HOB) programme coordinator and FDS executive forrester Michael Ngelai

The lower reaches of the area were heavily logged but the forests in the upper reaches, especially the steep inclines, are relatively intact.

The area was first logged about 30 years ago but due to the unpredictable weather and the method used, logging could not be carried out on as large a scale as conventional logging practices.

On the other hand, it could also be argued that loss of habitat due to logging and large-scale land clearing for oil palm plantations and other agricultural purposes in surrounding areas may be forcing wildlife to seek refuge in Payeh Maga.

Whatever the reasons, it only underlines the need for further surveys and studies of the area to identify the factors supporting and/or threatening Payeh Maga so that a comprehensive and sustainable management and conservation programme can be effectively implemented.

Payeh Maga’s relatively easy accessibility is a big positive for researchers and birdwatchers as it is only two hours’ drive by gravel and dirt road from Lawas town, and a five-hour ride from Kota Kinabalu.

Unfortunately, it also means that as the area gains recognition for its unique biodiversity, it will also become more vulnerable to malicious activities such as poaching.

Already, the area is being frequented by intruders in search of wild gaharu (agarwood) which can fetch as much as several thousand ringgit per kg depending on quality. 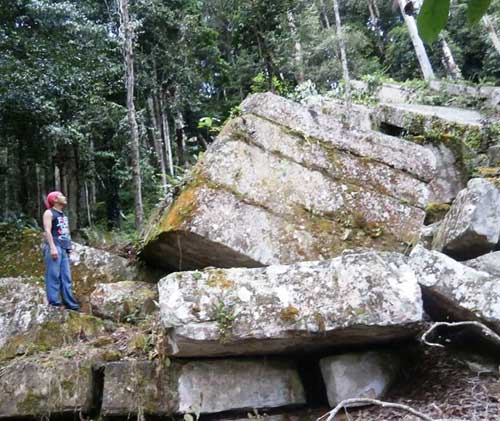 With such rich biodiversity at their doorstep, the residents of Long Tuyo are naturally eager to harness the growing local and international attention to benefit the local community.

“We are not afraid of hard work. We want to be a part of the development so that our young people can benefit. But we need help and support to realise our goals,” said headman Salimun Baruk.

“In the past, we took part in a number of projects at the urging of various government agencies but they came to nothing despite our efforts. We were told to take up large loans but many did not dare. A few did so but now they are in a quandary as these projects failed and they are not able to repay the loans.

“Many promises of better development and infrastructure have also fallen flat. We are forced to keep chasing and reminding the officials and representatives every time we see them.

“For example, we have been asking for financial aid to improve the safety of the bridge we use everyday for the past five years and we are still waiting.”

Nevertheless, Salimun remains hopeful their pleas for better infrastructure and more support from various government agencies will finally be heard, especially in light of the villagers’ willingness to support initiatives to turn Payeh Maga into an ecotourism destination and Long Tuyo into a homestay destination.

“If more people come, it will open up more job opportunities. But we also need to equip ourselves with the right infrastructure, facilities, skills and knowledge so that we can create a good impression on visitors so that they will return,” he said.

Salimun is grateful to the FDS for the assistance to their community over the years, including refurbishing their community hall and starting a gaharu cultivation programme.

HOB’s Michael told thesundaypost it was important the local community benefit from any programmes being carried out so that they will feel they have an interest and a part to play in seeing the programmes succeed.

Among the initiatives in the pipeline are plans to train local residents as bird and nature guides as well as tap into local know-how and resources to support long-term scientific surveys and studies of the area by local universities.

Potentially, this could create more job opportunities for residents as homestay operators, porters, research assistants and guides, drivers, amongst others.

Michael agreed Payeh Maga has the makings to become an important resource for biodiversity research and environmental sciences, as well as a premier birdwatching destination in the region.

To this end, he is supportive of greater protection and conservation status for the area, which is currently within a timber concession. 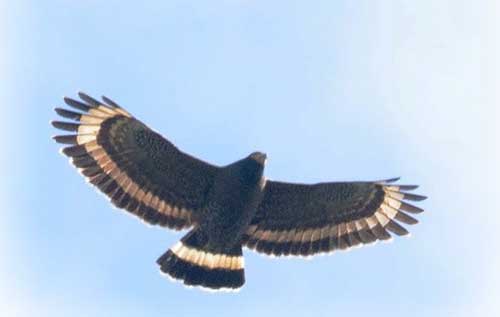 Paradoxically, logging may have played a role in encouraging the high level of avian biodiversity at Payeh Maga, according to Heart of Borneo (HOB) programme coordinator and FDS executive forrester Michael Ngelai

The lower reaches of the area were heavily logged but the forests in the upper reaches, especially the steep inclines, are relatively intact.

The area was first logged about 30 years ago but due to the unpredictable weather and the method used, logging could not be carried out on as large a scale as conventional logging practices.

On the other hand, it could also be argued that loss of habitat due to logging and large-scale land clearing for oil palm plantations and other agricultural purposes in surrounding areas may be forcing wildlife to seek refuge in Payeh Maga.

Whatever the reasons, it only underlines the need for further surveys and studies of the area to identify the factors supporting and/or threatening Payeh Maga so that a comprehensive and sustainable management and conservation programme can be effectively implemented.