Monday, February 24
You are at:Home»News»Sarawak»Kite festival sends entry No. 4 into Book of Records 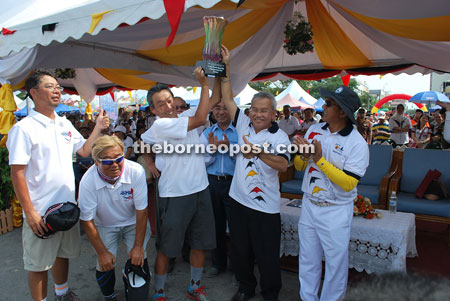 BINTULU: Another feat entered the Malaysia Book of Records (MBR) during the last day of the 10th Borneo International Kite Festival 2014 at the Bintulu Old Airport site yesterday for the ‘Longest arch kite’.

The third entry into the MBR was for the most number of kites flying simultaneously in 20 minutes, when 2,250 kites were flown in the ‘let’s fly together’ event during the Sarawak Gudi Festival 2013.

Talib (second left) and other guests giving their thumbs-up to the longest arch kite tunnel entry into MBR.

Yesterday, a total of 2,500 diamond kites were flown, forming the longest arch kite tunnel of 500 metres along the old airport site.

Thousands of people were present to witness the beautiful and record-breaking event during the last day of the festival.

“I am pleased to note that this year’s festival is much better than the previous edition and I want to thank all parties involved in organising the event.

“Next year this festival will be made a national event and this is actually a very big achievement for us,” said Mohidin, adding that small traders will generate even bigger income in the next edition. 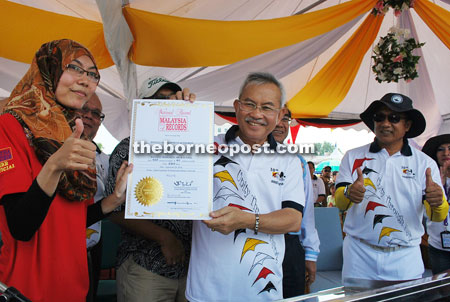 Talib shows the MBR certificate as Nurul (left) and Yakup give the thumbs-up for the new record.

Meanwhile, Talib was delighted with the positive response from the public and participants. From the tourism aspect, he said it was a great achievement considering that the government was aggressively promoting various interesting events in the country, including the kite flying festival.

SSKC Delta Force Team from Japan won the 2nd Asia Pacific Sport Kite Championship which was held as part of the main activity during the festival. The trophy was presented to them by Talib.