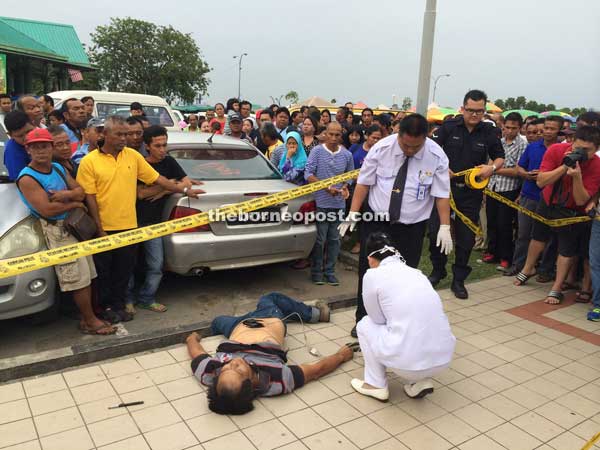 The victim, who was only identified only as ‘Lau’ (at press-time), was walking with a friend to a coffee shop when the freak incident happened.

They were heading for a coffee break as Lau was waiting for customers for his chartered van.

It is believed that the battery of the e-cigarette exploded, taking into account that it popped out from the device during the explosion.

The force of the explosion struck Lau in the chest, causing him to collapse.

The friend, who was shocked, said he tried to help Lau and discovered a hole with burnt marks on Lau’s chest.

He said Lau did not die instantly as his eyes were wide open when his name was called out.

However, he believed that Lau must have passed out before his demise.

Startled members of the public at the market offered help by calling up an ambulance from Bintulu Hospital, as well as police who rushed to the scene.

However the root cause of Lau’s death was still being investigated, pending a post-mortem.

• `It could be a modified flare pen, not E-cigarette’

• ‘Explosion of e-cigarette not likely cause of death’

The exploded device found at the scene.